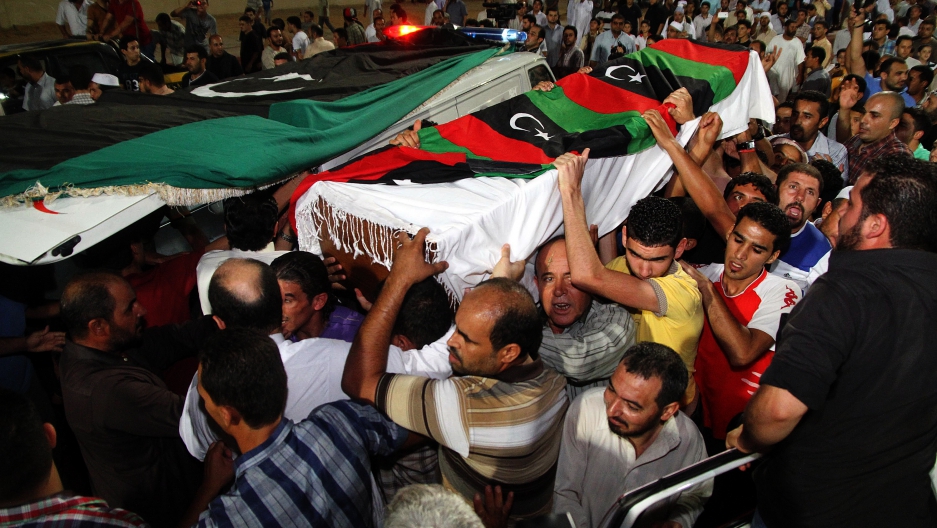 The coffin of Omran Ben Shabaan is carried as thousands of Misrata residents pay their respects during his funeral at Misrata stadium on September 25, 2012 in Misrata, Libya.
Credit: AFP/Getty
Share

Omran Shaaban, one of the men credited for capturing former Libyan dictator Muammar Gaddafi, was buried Wednesday after he had reportedly been tortured and shot dead in a rival town, Al Jazeera reported. Shaaban was 22 years old.

Shaaban's relatives told Reuters that he was kidnapped by armed men in July close to Bani Walid while he was returning from Misrata.

Shaaban was later freed following diplomatic efforts by Mohammed Magarief, leader of the ruling national congress. However, by that time he was already in critical condition and later died in a Paris hospital.

Shaaban's brother Walid told Reuters, "He was kidnapped on his way back by some criminal group. The lower part of his body had gunshot wounds and he was tortured."

Al Jazeera's Hoda Abdel-Hamid reported from Benghazi on Wednesday that Shaaban was treated as a national hero at his funeral. "His funeral procession on Tuesday night was an impressive affair. The coffin, wrapped in the national flag, was taken to a sports stadium in Misrata where thousands of people paid their last respects." According to the Tripoli Post, over 10,000 people came out to pay their respects.

Here is GlobalPost's exclusive footage of Gaddafi being beaten by rebels taken immediately after he was captured.