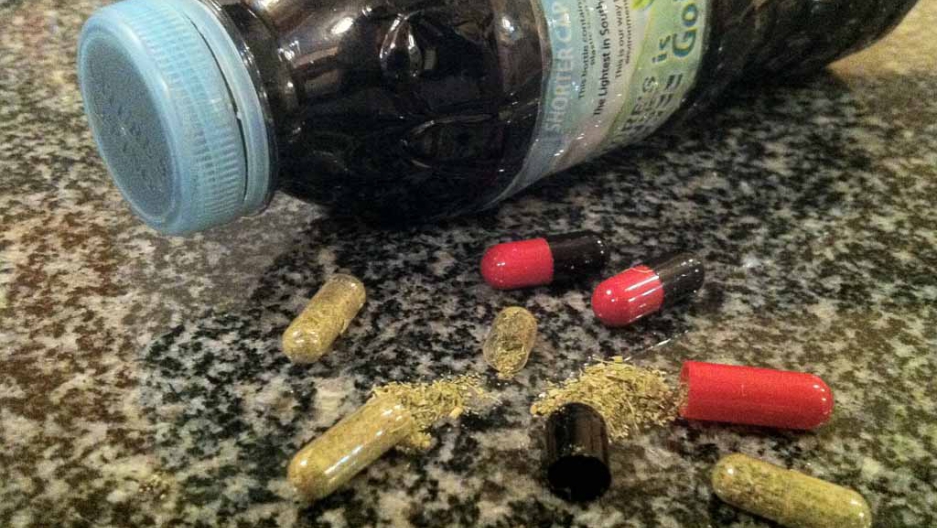 An illegal abortion cocktail known in the Philippines as "pampa regla" purchased on the black market outside one of Manila's most exalted churches, the Minor Basilica of the Black Nazarene. Vendors promise the concoction can cause even a 1-month-old human embryo to bleed out with menstruation.
Credit: Patrick Winn
Share

MANILA, Philippines — In the shadow of Manila’s most exalted church, a bazaar offers wares considered most unholy: abortion cocktails going for $3.60 a pop.

Most who flock to this church, the Minor Basilica of the Black Nazarene, come to kneel before a wooden Christ figurine. Having survived a fire outbreak aboard a 17th-century galleon ship, according to legend, the flame-blackened statue is believed to impart miracles upon the faithful.

But others come to place their faith in “pampa regla,” illegal concoctions promised to terminate pregnancies. Sold secretly outside church gates, where government signage warns its vendors of 10-year prison sentences, the concoctions are traded alongside candles and charms.

“Just do as the note says,” said a female vendor who warily handed over a plastic baggie. Its contents: one bottle filled with liquid resembling grape Kool-Aid, six pills packed with minced herbs and instructions to swallow the brew with three pills per day. Vendors claim the recipe will cause even a month-old human embryo to bleed out with menstruation.

If approved for sale in the West, such a concoction might be called an “emergency contraceptive” if consumed the day after sex. In the Philippines, Roman Catholicism’s only major stronghold in Asia, priests broadly consider it to be a tool of murder. And in the eyes of many Filipino holy men, so too are the birth control pills considered unremarkable across much of the developed world.

Across Asia’s ascendent economies, the birth control business is booming. Pharmaceutical giant Bayer Schering has signaled that large Asian nations are among its “key growth areas.” But in the Philippines, where Vatican-appointed archbishops wield incredible power, birth control is a complex issue tangled in spirituality, politics and fears of American meddling.

Today, the state’s role in providing birth control and preventing abortion has become the nation’s most divisive issue by far. The debate has cleaved priests and pro-contraception politicians into bitterly feuding camps. Both condemn the underground trade in abortion cocktails. But the forces that compel desperate women to consume these illicit pills are hotly disputed.

A political movement, backed by Philippines President Benigno Aquino III, warns that the nation will never prosper so long as the poor entrench their poverty with huge families. Free or cheap birth control, proponents argue, could stifle a population boom among society’s neediest. A dearth of affordable contraceptives, they say, pushes women to their last-resort: street abortion methods such as “pampa regla” that can wreck their internal organs.

Their plan of action, a “Reproductive Health Bill” now debated in congress, would mandate sex-ed classes in public schools along with tax-subsidized distribution of condoms, contraceptive injections and birth control pills for the poor. Its goal of curbing the nation’s fast-rising population of 95 million is supported by the United States and the World Health Organization. (The Philippines’ growth rate — now 25 average yearly births per 1,000 people — is among the world’s highest outside Africa.)

But the nation’s Catholic bishops call this internationally backed movement a declaration of “open war.” They portend a darker threat than overpopulation: spiritual ruin.

“The church has to stress that this is murder,” said Gabriel Reyes, a 71-year-old bishop assigned to study family planning by the Catholic Bishops’ Conference of the Philippines. “The people in favor of the bill, they are wrong. And in that sense, no, they are not good Catholics.”

According to Reyes, there is only one righteous approach to birth control: the so-called “rhythm method,” in which men abstain from sex during the 10 to 12 day window in which their female partner is ovulating.

More from GlobalPost: Filipino nurses in the US fined for speaking native tongue at work

But denigrating the piety of the contraception bill’s supporters will not shake their resolve, said Miriam Defensor-Santiago, a veteran lawmaker who is aggressively promoting its passage. Ignoring an explosion of babies born into poverty, she said, will have “grave consequences” for the Philippines.

“They are promoting fear, for ignorance will always ignite fear,” Defensor-Santiago said. “This is hilarious ... how can they say there are good or bad Catholics with respect to family planning? That attitude is very narrow minded. Its medieval.”

Babies at both breasts

Outside a different chapel in Manila, the baroque-style Malate Church, Josephine Gonzalez huddles by a creaky rickshaw with her infant son. At 35, the homeless mother of eight could pass for a ragtag 60. Her eyes are sunken, her limbs are skeletal and and tawny skin sags off her cheekbones.

The only clue to her true age is the baby sucking at her right breast. Revealing a gummy upper palate, Gonzalez says she’s milk fed kids until her teeth have fallen loose. (According to a Journal of Periodontology study, heavy breastfeeding can deplete calcium.) “Some years,” she said, “I’ve had one baby at each breast.”

Each night, Gonzalez, her husband and their seven children pile into a rickshaw they assembled from scrap pulled from a garbage dump. There is a bit more space now that her oldest, a 17-year-old son, is in prison on a stabbing charge.

About 30 other families also live illegally around the church, she said, and none have fewer than four or five kids. Many have eight or more. “Kids are a burden when they’re young,” Gonzalez said. “But once they’re big enough to beg, they’re a blessing.”

“In an ideal world, she’d only have three children,” Defensor-Santiago said. “Her husband could scrape up enough money to send them to public school. Filipino families are closely knit, so they could have banded together, in our tradition, so that at least the youngest could attend college. And maybe they could have a good lower-middle class life.”

“But as it stands,” Defensor-Santiago said, “she is condemned to poverty and the humiliation that comes with it.”

The average Filipina woman starts having sex at 21 and hopes to have roughly three kids, according to surveys conducted by the Philippines’ National Statistics Office. The poorest, however, typically end up birthing five or more. And one-fifth of married women, according to the survey, want to stop or slow down their birth cycle but never end up accessing contraception.

After her third child, Gonzalez said, she hoped for tubal ligation (getting her tubes tied) through a free government program. But the last two Manila mayors have vowed not to spend a single centavo — the lowest denomination of Philippine currency — on contraceptives or tubal ligation, which is also opposed by the Catholic Church.

“Yes, I have heard that these things are immoral from the church,” said Gonzalez, stroking her infant son’s wispy scalp. “So when I pray, I just ask for food for the kids and, if I’m really feeling hopeful, a home. But I’m not even sure this child will be my last.”

Colonized by Spain and the US back to back, Philippine society is molded more by the Western world than any Asian neighbor. Europe offered Roman Catholicism, a faith observed by eight in 10 Filipinos. The US offered a taste for burger joints, Hollywood and American-accented English.

But Filipinos must not adopt its Western allies’ eroded sexual mores, Reyes said. “Before, abortion was illegal in the US, illegal in Europe ... but Holy Father [the pope] has said it: where contraception spreads, so does pro-abortion culture.”

Though the church opposes the existence of all contraceptives, Reyes said, it will not pressure Philippine politicians to ban them outright. However, bishops will not stand for a government that distributes condoms or birth control pills with public money.

“They should respect the church to which the majority of Filipinos belong,” Reyes said. “Muslims don’t eat pork. And the government doesn’t try to promote pork to our Muslims saying, ‘It’s for free! It’s for your health!’ This is the same thing.”

The priests are wary of America’s influence for a reason. Until recently, US taxpayers helped pay to flood the island nation with contraceptives. The federal US Agency for International Development (USAID) was the Philippines’ largest provider of condoms, birth control pills and injectable contraceptives until the White House, under President George W. Bush, phased out the program between 2003 and 2008.

Filipina women felt the loss. According to the Guttmacher Institute, which studies global reproductive health, the percentage of Philippine women obtaining contraceptives from the public sector plummeted from a high of 67 percent in 2003 to just 46 percent in 2008.

The Obama administration has not reversed the previous administration’s course. But that has hardly comforted the Filipinos who virulently oppose America’s foreign contraception funding. A September editorial signed by almost every major Filipino group opposed to the Reproductive Health Bill stated that, if Obama wins a second presidential term, he and his administration will “continue to target countries like the Philippines to spread their culture of death.”

More than a decade’s worth of feuding over the Reproductive Health Bill is pushing the Philippine Congress to finally decide the bill’s fate. President Aquino’s predecessor, Gloria Macapagal-Arroyo, threw in her lot with the bishops. But Aquino, a bill supporter, can bring the full influence of the president’s office to bear on politicians who insist on impeding the bill. Its future remains uncertain.

“It will be very soon now with all this pressure,” said Ernesto Herrera, a longtime Philippine lawmaker and supporter of the bill. “Abortion, yes, all of us should be against that. But it’s irresponsible for parents to continue producing if they’re dependent on children picking through the garbage.”