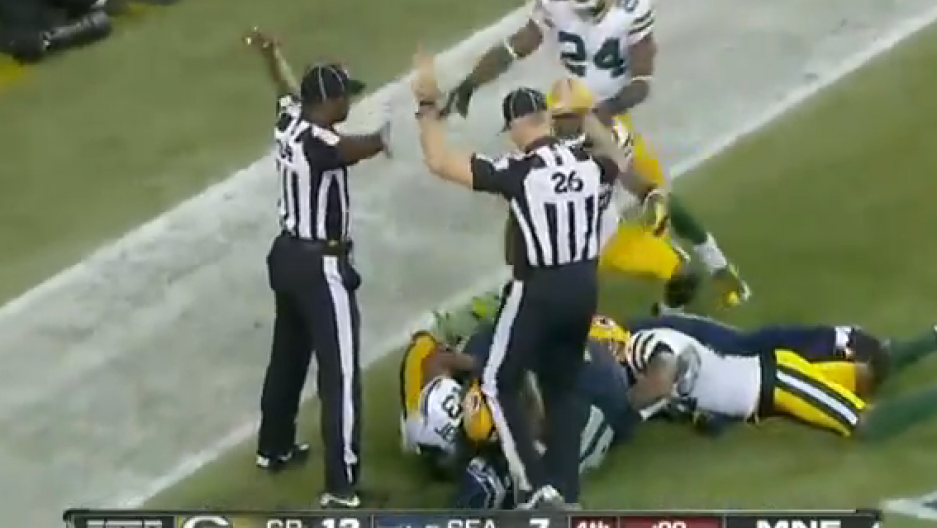 Referees react to a catch in the endzone at the end of Monday night's Seahawks-Packers game in Seattle. (Photo courtesy of NBC Sports video, via YouTube.)

The National Football League says its referees made the wrong call in Monday night's football game between the Green Bay Packers and Seattle Seahawks.

But the league had a very short response to those who called on the league to reverse the outcome. Too bad. Game stands, with the Seahawks victorious on a questionable interception and missed pass interference call.

A controversy at any time, this blown call is making even bigger waves because the referees working the game are "replacement officials," — small college, high school and even former Lingerie League refs called in by the NFL to sub in for locked out officials. The NFL and its referees union have been locked in negotiations for months over pay, benefits and control over when the league can replace an official for quality reasons.

The replacement officials have been mocked and laughed at and lambasted throughout the beginning of the season, but Monday's bad call seemed to attract everyone's attention. Even President Barack Obama weighed in, taking to Twitter to call on both the referees and NFL to compromise, and get the regular officials back on the field.

''I've been saying for months we've got to get our refs back,'' Obama said. ''NFL fans on both sides of the aisle hope the refs' lockout is settled soon.''

In perhaps the last moment of bipartisanship before the November election, Republican Vice Presidential candidate Paul Ryan agreed — though Ryan didn't miss the opportunity to turn his comments into a swipe at the president.

"It reminds me of President Obama and the economy," he said. "If you can't get it right, it's time to get out. I half think that these refs work part-time for the Obama administration in the budget office. ... They're trying to pick the winners and losers, and they don't even do that very well."

Green Bay coach Mike McCarthy said he had never seen anything like the call in all his years of football. Wisconsin state senator John Erpenbach tweeted out NFL commissioner Roger Goodell’s phone number. According to one report, the NFL offices received 70,000 voice mails from Monday night to Tuesday morning.

Republican Gov. Scott Walker, who became a national figure when he went after public employee unions last year, even sent out a tweet calling for the return of the NFL’s locked-out unionized officials following the call.