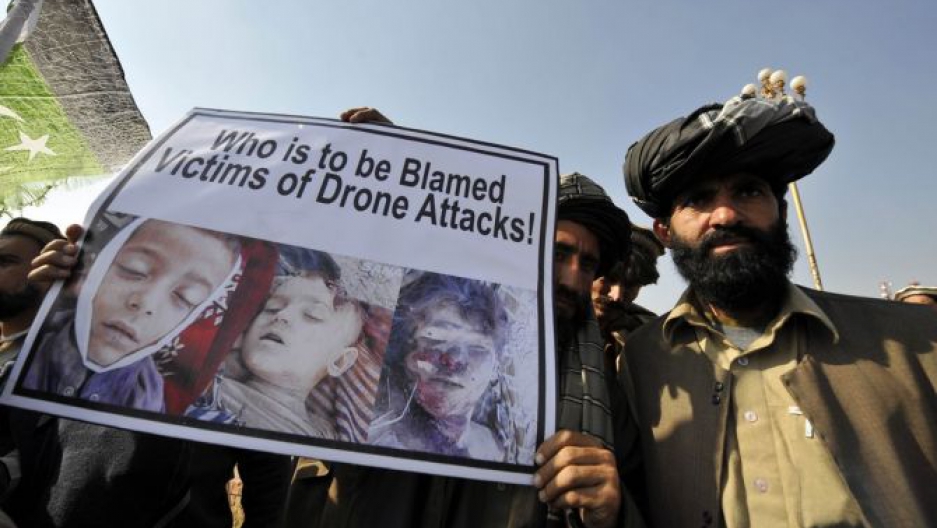 Pakistani tribesmen hold up a placard of alleged drone strike victims during a protest in Islamabad on February 25, 2012 against the US drone attacks in the country's tribal region. The protesters demanded an immediate end to drone attacks and compensation for those who lost relatives or property.
Credit: Aamir Qureshi
Share

Referring to just war theory, a classical underpinning of military ethics, Obama said, “War is justified only when certain conditions were met; if it is waged as a last resort or in self-defense; if the force used is proportional; and if, whenever possible, civilians are spared from violence.”

“For most of history, this concept of ‘just war’ was rarely observed,” he continued, citing the Third Reich and other examples. “Modern technology allows a few small men with outsized rage to murder innocents on a horrific scale.”

Then came Obama’s caveat, and a shape of things to come: “There will be times when nations — acting individually or in concert — will find the use of force not only necessary but morally justified.”

Technology is the moral black box that lies between those “few small men” in remote geographies of militant Islam, and teams of American military personnel who target them in front of closed-circuit screens, peering into the places of their hunted lives, programming drone attacks like a surreal video game.

The programmers go home to supper, wives and children while the Unmanned Aerial Vehicles (UAVs) rain fire on villages half a world away, obliterating those deemed guilty, sometimes, and, too often, blowing up innocent people caught at the wrong end of time and history.

When Obama wrote his own war doctrine referencing just war theory in the post-9/11 era, he did so as a president who perhaps more than any other leader in American history has relied on the secret killing of individuals to advance his administration’s policy goals. And when Obama wrote those words, he put himself on a continuum of history and of mankind’s thinking about the idea of war that dates back to at least the 4th century.

“The wise man will wage just wars,” wrote St. Augustine (354-430 AD) in The City of God. “For if they were not just, he would not wage them, and would therefore be delivered from all wars.”

Nine centuries later, St. Thomas Aquinas drew on Augustine and Aristotle in arguing that war must have a purpose beyond self-gain: peace should be its raison d’etre. In a time when warlords roamed parts of Europe, Aquinas insisted that only the state should wage war.

“Drones are not immoral per se, but how they are used presents serious moral and legal problems,” Professor Tobias L. Winright, a theologian at Saint Louis University and coauthor of After the Smoke Clears: The Just War Tradition and Post War Justice told GlobalPost. “Is it a last resort? Are we using force without intending to kill civilians?”

Winright references a December 17, 2009 strike in Yemen that killed Saleh Mohammed al-Anbouri, a militant linked to Al-Qaeda. The Navy missile also killed 41 civilians, of whom 22 were children. “Are civilian deaths collateral damage?” continues Winright. “Is the policy doing things to blur the reality?”

“President Obama and his administration have a policy that any male 18 or older can de facto be regarded as a militant. That is making criterion almost a dead letter. Human rights groups see this as a serious dead letter.”

Thomas Powers, author of Intelligence Wars and other books on the CIA, is more blunt.

“Drones are an unreliable and conspicuous way of killing individuals,” he told GlobalPost. “With drones we have no way to tell who we are killing. It’s abrogating a right to ourselves that no organization should have. It’s arbitrary and driven by politics. What seems inevitable today is going to cause you trouble tomorrow. Ask yourself if the United States would accept the right of another country to decide who among Americans they would kill. There are probably people in Arizona allied with drug cartels. Would we allow Mexican forces to use drones against them? Hell, no.”

More from GlobalPost: Are the drones working in Yemen?

“Other commanders in chief have presided over wars with far higher casualty counts. But no president has ever relied so extensively on the secret killing of individuals to advance the nation’s security goals,” wrote Greg Miller of the Washington Post in December 2011.

Between 2004 and March 2012, at least 176 children were killed in 344 CIA Drone strikes in Pakistan, according to the Bureau of Investigative Journalism in London, which does extensive research in tracking death tolls. The majority of those attacks, 292, have come under the Obama administration.

“Mr. Obama must approve any name,” The New York Times reported on May 29. “He signs off on every strike in Yemen and Somalia and also on the more complex and risky strikes in Pakistan — about a third of the total.”

America has diplomatic relations in those three countries where drones leave a scorched, bloody aftermath in the hunt for terrorists. Getting definitive data is all but impossible from remote areas.

“It takes us along time to figure out that one particular drone strike had killed how many civilians and how many militants,” Shahzad Akbar, a Pakistani human rights lawyer said April 27 on the Democracy Now radio program. “And that is the reason the CIA has been pushing to keep it in this way, so that the rest of the world cannot know who are the victims... So, even CIA doesn’t know the identity of most of the people they’re killing in Waziristan.”

“Officials claimed ten Taliban had been killed, a deputy Taliban commander said five were killed, the political administration claimed nine Taliban were killed, while tribesmen claimed they had counted 25 bodies,” The Daily Times reported October 5, 2009, on a strike in Pakistan.

Drone warfare marks a revolution in strategy by killing people in noncombatant countries with supposedly precision weaponry. The aerial robotic technology has proliferated at astonishing speed. This growth industry, which blurs the boundaries of civilization, has fired a debate among legal scholars, ethicists and military thinkers grounded in just war theory.

“When the United States kills people in foreign, sovereign states, the world looks to international law for the standard of justification,” Notre Dame law professor Mary Ellen O’Connell argues in a CNN post.

Nevertheless, the Pentagon allocated $95 billion for drone purchases from defense contractors last year. Israel is the number two exporter of drones, and selling lots of them to Russia. Meanwhile, American police departments are hungry to acquire them for surveillance on drug gangs, if not the surgical strike on a mass murderer holed up in a building, shooting at cops. How much will the law allow?

“Billions upon billions of dollars have been spent from America to Asia on machinery, software and workers whose only purpose is building a better flying death robot,” writes antiwar activist Medea Benjamin in the newly-released Drone Warfare: Killing by Remote Control.

More from GlobalPost: China will use drones to monitor maritime activity

Benjamin, a founder of the peace group CODEPINK, is leading a human rights delegation to Pakistan and Yemen in the fall.

“Drone technology is particularly dangerous because it makes war so easy,” she told GlobalPost.

“Violating international law sets a terrible precedent for the rest of the world. I’m very surprised at Obama. I thought that as a constitutional lawyer he would have greater respect for the Geneva Convention to say nothing of the US Constitution because killing Americans overseas without a judicial process seems such a gross violation of the law.”

But the temptations of technology are enormous. The average UAV costs a mere 10 percent of an F-16 fighter jet. And with the flying robot there is no risk that the pilot may lose his life should the mission be intercepted.

Proportional response and the right to human life are cornerstones of just war theory and central to the debate over drones; yet the moral issue has barely made the radar screen of major media.

“Of the thousands of people that the Bureau has identified as being reported killed in US attacks, under 500 have been identified by name,” explains the Bureau of Investigative Journalism.

The Obama administration policy rests on the tolerance of a passive public, an out-of-sight, out-of-mind mentality toward the erosion of basic human liberty. As the people who died in the Pentagon and Twin Towers went to work in the early morning of September 11, 2001, with no idea of the attack out of nowhere that would take their lives, so the villagers in primitive regions go about their days, unaware that they will soon be killed because of where they are, not who they are.

"The experience of the selling of the Iraq War in 2003 by means of false and mistaken information should make the public dubious of intelligence as a warrant for execution from the air,” stated a July 16 editorial in America Magazine, the Jesuit biweekly.

“Due process must mean more than careful deliberations by officials. The authority and conditions for killing suspected terrorists must be clarified in both US and international law. US antiterrorist law ought to reflect John Adams’ proposition that ours must be a government of laws, not of men.

Jason Berry is the author of Render unto Rome: The Secret Life of Money in the Catholic Church, which received Investigative Reporters and Editors 2011 Book Award.