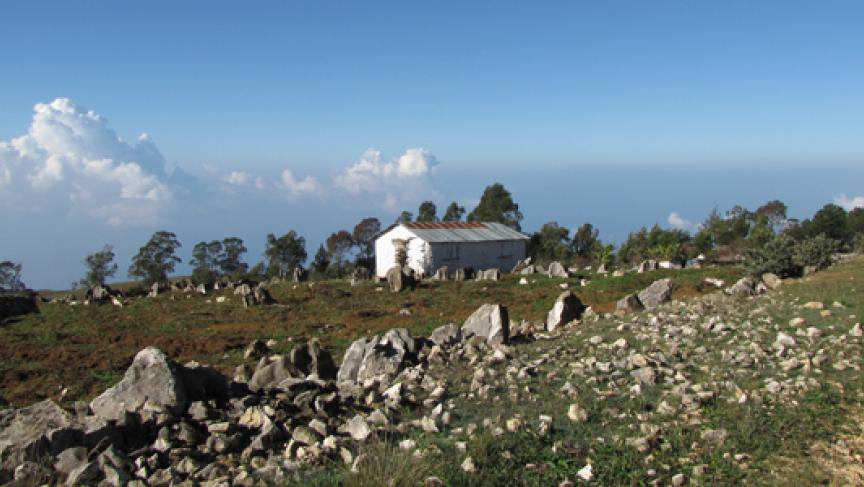 Haitian president has promised to step up protection of the national park, but the residents there are resisting the efforts. (Photo: Amy Bracken)

Share
The sound of peeping frogs is all that penetrates the darkness on a recent night in Haiti's Parc La Visite. The national park is barely 15 miles from Port-au-Prince, but it feels a world away from Haiti's crowded and crumbling capital. More than a mile high, clouds wrap around a mountainside, shrouding pine groves, broad leaf forests, waterfalls and caves. It's hard to imagine this peaceful and remote setting as the frontline of a battle. But since president Michel Martelly began his new environmental protection effort, that's literally what it's become. Mareluse Nord is one of several hundred Haitians who live in the park. "They came and said, 'Don't you recognize that you have been asked to leave?'" she recounts of the day this summer when the police tried to evict her and her neighbors. "I said, 'yes, we're ready to leave, but we need somewhere to go.' They said they'd give us [$1,200], but I said that can do nothing for us. We protested, and the police fired teargas. We threw rocks, and they shot bullets. They destroyed our houses and killed four people." The violence was part of an aggressive crackdown on squatters in the park. But the residents resisted in part because it has never been made clear who can be here and what they can do. Even the boundaries of the park itself are undefined. People have been living on this land since at least the 1930s. The area was declared a national park, and residents were ordered to leave in the 1980s, but that order was never enforced. Seventy-five-year-old Emmanuel Xavier insists he has title to his land, granted in 1942. And he says that's about all his family has. "We've been here for three generations. Now the state comes and kicks me off the land… me, a landowner and elderly resident," he says. "This little sickle and that little wheel are what allow us to eat and drink. Besides that, there is nothing but the earth we work." The anger runs deep among the park's residents. But at least some of its neighbors are happy to see their government finally try to protect the park. Heavy rains come often here this time of year. And whenever they do, Winthrop Attie fears floods and landslides will follow. Attie runs an inn on land just below the park. He says those living up the hill are destroying the land and drinking water of everyone below them by growing crops, defecating, burying their dead, and cutting trees in the watershed. He says, "Haiti has become like a sandcastle, melting at every rainfall, because people are doing things everywhere, as they want. It's total anarchy." Attie says his father bought this land in the mid-1900s and pushed for the area uphill to be protected. Eight years ago, he co-founded an organization that plants trees and hosts environmental education camps for children here. Attie says letting people live in the park sacrifices the greater good for the interests of a few. "How can you compare 500, 600 people to 4 million people?" he says. "These people have to move from the watersheds. It's not about abusing poor peasants. It's about restoring some order and harmony in the country." Attie says president Martelly is the first national leader to make protecting the environment a priority, and he's very glad to see it. But some question whether the government's get-tough approach in the park is really about protecting the environment and the common interest. Yves Andre Wainright served as Haiti's Minister of the Environment under three previous presidents. He says the actions of the current administration are inconsistent. "When the state decided to remove people from the watershed, it created all kinds of suspicions," he says. "The park boundaries have not been identified, and there are other zones that are very rich and important and on which the state is silent. I've identified eight water sources in the area. So why remove people from just one source and not the seven others?" The park fight has touched yet another nerve in Haiti's longstanding rift between rich and poor. And it isn't the only flashpoint among the government's new environmental initiatives. There's conflict over a crackdown on dumping trash in Port-au-Prince's streets and canals and over a new ban on the sale of some plastic bags. But so far the battle over Parc La Visite is rousing the most passion… and has the highest stakes. A park resident says there have been no further negotiations on clearing the park since this summer's violence, but government spokesman Ady Jean-Gardy says the eviction effort will continue. "We have allowed destruction of the environment to go on for too long," he says. "Now people are angry because of the unfortunate incident in the park, but all will be resolved through dialogue. And I think we also need to educate the squatters." Jean-Gardy says some squatters might be offered environmental protection jobs in the park while the rest are moved out. But residents say they won't move until they're given new places to live and reparations for the killings.