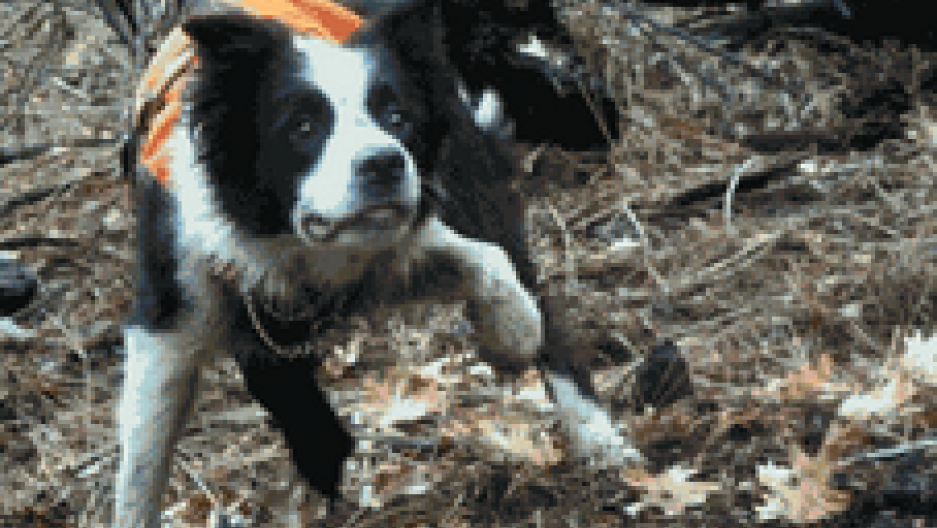 Scientists at the University of Washington are using rambunctious rescue dogs to track down endangered species in their natural habitat.

These canines will work all over the world, tracking elephants in Africa, Orcas in the Pacific and chasing salamanders in the controversial tar-sands area of Alberta, said professor Samuel Wasser, the Conservation Canines program and director of the university's Center for Conservation Biology.

"The dogs allow us to sample large bits of wilderness and also to sample multiple species often at the same time," he added. "We wanted a method to sample animals according to their distribution in the wilderness. And one of the problems with feces is that some animals may use scat to mark their territory, which makes their scat more conspicuous and easier to find."

The scientists turned to dogs trained to detect narcotics, but instead of rewarding them for finding cocaine or marijuana, they're rewarded for finding, well, poop.

"Our dogs have an incredible play drive for a ball. They are so focused, that, if they know you’ve got the ball, and you throw the ball, nothing in its way will stop it," Wasser said. "You can transfer this incredible drive into finding samples because the dog is so obsessed. Once it smells a sample and knows its going to get the reward from it, it will work tirelessly to find it."

Once a sample is found, scientists can collect it and do the sorts of DNA testing that help them track a species.

"We know the location of those samples, so we not only know how many individuals there are, but where they are located, what areas they are avoiding," he said. "And then we can get the physiological measures from those same samples again and see if they are in areas that they really prefer, are they in better physiological health than when they’re in areas that they’re avoiding."

Most of the dogs that wind up with the group are animals that were once owned by people, who ultimately couldn't handle the dog's insatiable drive to find and play with its ball.

"The problem is that those dogs are so wild that nobody wants to adopt them. We go through the pounds and we look for the dog that has this completely obsessive drive for the ball," Wasser said.

In particular right now, Wasser's dogs are working with the Nature Conservancy and U.S. Fish and Wildlife Service to find Jimez mountain salamanders. The small amphibians are small, just a few inches long and no thicker than a pencil.

In addition to their size, their coloring and reclusive habits make them very hard to track.

"When they’re above ground, it’s only for this short period of time in the monsoon when there’s good rain then you need to be able to locate them quickly," he said.

The dogs are also working in Alberta's tar sands, to monitor how the area's oil development is impacting caribou, deer and wolves. The dogs and their handlers go in during the dead of winter so scientists can make population estimates on all three species.

There have been concerns raised that the caribou will be extinct in Alberta in the next two decades, because of the oil work. But that doesn't seem to be the case.

The government had been considering reducing the wolf population to protect the caribou, but Wasser's team's research also discovered the wolves are eating few caribou and mostly deer.

Wasser says if the wolf population is reduced, rather than help the caribou it would probably help the deer, which could in turn hurt the caribou.

"The deer would undergo a population explosion in the area. And deer eat everything. They also bring with them a number of diseases like chronic wasting diseases, a variety of parasites that can jump to caribou and potentially really cause great harm," he said.

The problem, it seems, according to Wasser, is a lack of food, specifically the lichens that female caribou eat while pregnant during the winter.

In other words, as the area is built up to allow for oil extraction, roads are being built right over the caribou food source.

So, Wassers group made two main recommendations that should help the caribou get the food they need.

First, they recommended working more intensively in small areas, rather than haphazardly over a large area, so the caribou can move around the drilling. Second, they recommended companies be more thoughtful about where they construct high-use roads.

"Giving them recommendations is one thing," Wasser said. "The nice thing that’s happening is that the oil companies are coming to us and saying 'OK, let’s get together and think about what is practical, what is not, and how can we best move forward in a manner that is going to put the animals at less risk.'"

And that wouldn't be possible if not for a team of dogs that loves to smell poop and chase a ball.