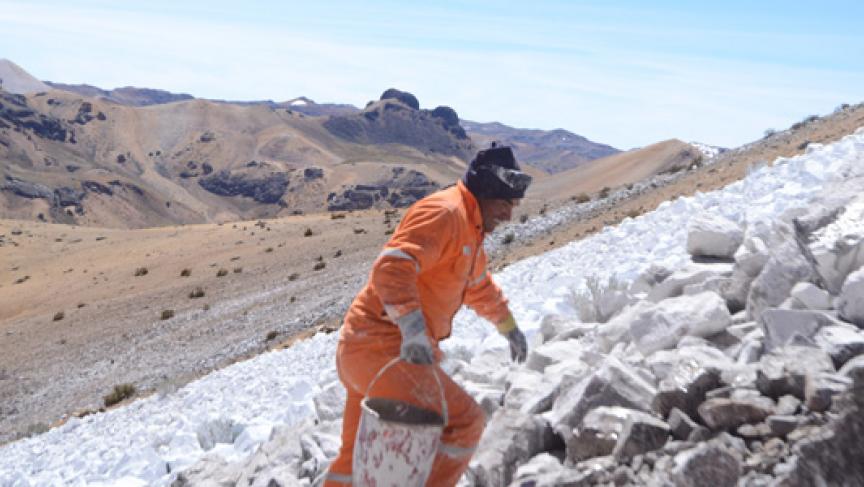 A worker carries a bucket of paint up the slope of Chalón Sombrero. (Photo: Daniel Grossman)

Share
Fourteen thousand feet up in Peru's Cordillera Blanca, glaciologist Benjamin Morales stands in a windswept dirt parking lot and looks across a rock-strewn slope. In the 1980's and 90's, Morales says, thousands of people came here to watch international ski tournaments. Back then, he says "all this was ice." The skiers raced down the glistening white Pastoruri glacier, whose broad white ramp unfurled from 2,000 feet above nearly all the way to this dusty lot. Since then, Morales has watched the glacier steadily melt away. Today, its closest edge is about a mile from the parking lot. "It's been regressing year after year," Morales says, "and this has caused the most important adventure tourism site in Peru to be all but closed." Morales knows that the Pastoruri glacier is hardly unique. Glaciers around the world are falling victim to global warming. Here in Peru, Morales estimates the Andes have already lost at least 25 percent of their ice. And what's at stake here is more than just a few ski slopes. Peru is largely a desert country and its thirst is relieved largely by glacier-fed streams. So glaciers here are a vital natural resource. That's why a few years ago, Morales decided he had to do more than simply watch the ice melt. "We want to find ways to stop this loss of good water," he says as he tromps over the Pastoruri glacier in heavy mountaineer's boots and a powder blue parka. "We want to start taking action to keep that from happening." Morales thought long and hard about how he could stop the local effects of a global problem. Then one day, it struck him: sawdust. He'd noticed how sawdust is traditionally used in his hometown to protect ice brought down from the mountains from melting. And he thought, if sawdust can insulate a block of ice, maybe it could insulate a whole glacier. So he bought 150 big sacks of it from a sawmill, hired a crew to cart it onto the tongue of the glacier, and had them cover a backyard-sized plot in about six inches of sawdust. Today, ten months later, the impact of the experiment is stunning. The entire ice edge melted and sank in the summer thaw–everywhere except the sawdust-insulated plot, which remained stubbornly frozen. It looks like a shaggy mastodon towering above Morales' head. "So we have proven that it's possible to prevent glaciers from melting," he says. Inventors call it "proof of concept." And having established that sawdust will insulate glaciers, Morales is now looking at other materials, like locally harvested straw. And he's not alone in his efforts to save Peru's glaciers. Several hundred miles south, near the city of Ayacucho, herder Salomon Pichca is part of an effort to bring back a glacier that's already gone away. Pichca is a small man with deep set eyes who used to graze livestock in marshes nearby, until the local glacier disappeared and the marshes dried up. Today, he's part of a work crew a couple of miles above the nearest road that's slathering homemade white paint onto black boulders near a summit called Chalón Sombrero. It's backbreaking work. Pichca says the crew hauls lime up from the road on lamas, unloads it, then turns around and heads back for water. Then they mix the lime, water and other ingredients, lug buckets of the paint up the rugged slope, and slosh it onto the sun-warmed rocks. Eduardo Gold, an entrepreneur from Lima who's the project's architect, says the idea for the project came from "a really simple fact, which is that the color white reflects light and prevents the transformation of that light into infrared radiation." Simply put, white rocks don't get as warm as black ones. Gold hopes an entire white slope will dramatically cool off high mountain breezes, and that summits like Chalón Sombrero could once again be cold enough to retain snow and ice year-round, beginning the process of rebuilding a glacier. So far, Gold's men have whitewashed an area the size of a supermarket parking lot, and he says the paint has already brought back wisps of ice to the mountain. He hopes to prove his idea's value once the crew has covered half a square mile of rock. And if it works here, he wants to do the same on other mountains. The World Bank has named Gold's experiment one of "100 Ideas to Save the Planet." The project has also been embraced by regional officials. But some remain skeptical. "From a theoretical point of view of physics, one can understand," says former park service chief Luis Alfaro. "But the question is, at what price?" Alfaro worries, among other things, about the environmental impact of the paint when it washes off the rocks. Others argue that tiny projects like painting mountaintops or insulating glaciers can never save the hundreds of square mile of mountain ice that still remain in Peru. Instead, they say, Peru must build new reservoirs to capture and store the water once held in glaciers. But Peru can hardly afford such huge investments. And with its life-giving water supply at risk, many here, like former Deputy Environment Minister Vanessa Vereau, feel the country can't afford to dismiss any idea for saving its glaciers. Vereau says no one knows whether such experiments will work. "But since we need to experiment and conserve water for the future, I think we should try. I think we should try." This story was reported with help from the Pulitzer Center on Crisis Reporting and the Whole Systems Foundation.