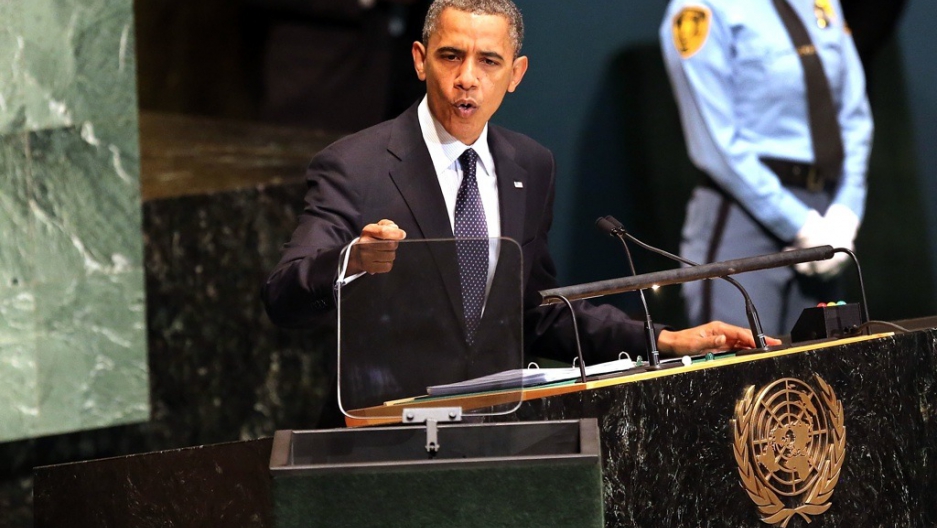 JERUSALEM — Yom Kippur, the Day of Atonement and the holiest day in the Jewish calendar, descended upon Israel like a blanket of silence just as US President Barack Obama concluded his speech to the United Nations General Assembly.

Israeli government spokesmen had earlier announced they would issue no comment on the speech, one of them adding, "don't call me unless war breaks breaks out."

But given the irritation Obama has expressed about the distraction of too much public "noise" concerning the crisis with Iran, it is easy to imagine that silence is a welcome commodity today for him.

In what was widely interpreted as an expression of impatience with recent antagonistic statements made by Israeli Prime Minister Benjamin Netanyahu, Obama said, "When it comes to our national security decisions — any pressure that I feel is simply to do what's right for the American people. And I am going to block out — any noise that's out there."

In the same interview, on 60 Minutes, Obama added, "Now I feel an obligation, not pressure but obligation, to make sure that we're in close consultation with the Israelis — on these issues, because it affects them deeply. They're one of our closest allies in the region."

The statements did little more than occasion further noise. Questioned by White House journalists about what exactly Obama was referring to, White House spokesman Jay Carney explained that "The president was making clear that his commitment and his country's commitment to Israel's security is as strong as ever — and unbreakable in nature. There's obviously a lot of noise around this issue at time."

In his speech at the UN General Assembly, which was in large part a tribute to the slain US Ambassador to Libya, Christopher Stevens, Obama hewed closely to the line he has adopted recently, refusing to publicly list "red lines," which would provoke an American military strike against Iran, as Netanyahu has demanded, but at the same time warning Iran with greater and greater urgency that time is running out for a peaceable solution to its nuclear development.

In a carefully worded section of his speech, Obama seemed to attempt to reassure Israel, where fear that the United States might be willing to accept a contained but nuclear Iran has been growing, and at the same time to warn Iran, again, that the United States will engage militarily if left no other choice, in order to prevent Iran from developing nuclear weapons capability.

"Let me be clear," Obama said, "America wants to resolve this issue through diplomacy, and we believe that there is still time and space to do so. But that time is not unlimited. We respect the right of nations to access peaceful nuclear power, but one of the purposes of the United Nations is to see that we harness that power for peace. Make no mistake: a nuclear-armed Iran is not a challenge that can be contained. It would threaten the elimination of Israel, the security of Gulf nations, and the stability of the global economy. It risks triggering a nuclear-arms race in the region, and the unraveling of the non-proliferation treaty. That is why a coalition of countries is holding the Iranian government accountable. And that is why the United States will do what we must to prevent Iran from obtaining a nuclear weapon."

In what can only be interpreted as a statement directed at both Netanyahu and Palestinian President Mahmoud Abbas, Obama also hinted at a possible focus of attention on the Israeli-Palestinian peace process, should he be elected to a second term.

"Among Israelis and Palestinians, the future must not belong to those who turn their backs on the prospect of peace. Let us leave behind those who thrive on conflict, and those who reject the right of Israel to exist. The road is hard but the destination is clear — a secure, Jewish state of Israel; and an independent, prosperous Palestine. Understanding that such a peace must come through a just agreement between the parties, America will walk alongside all who are prepared to make that journey."

For Netanyahu, who is facing electoral year threats from his right-wing flank and a growing chorus of accusations — from the center and the left — that he has forsaken all efforts at peacemaking with the Palestinians, Obama’s speech is likely to bring a post-holiday political, and personal, headache.