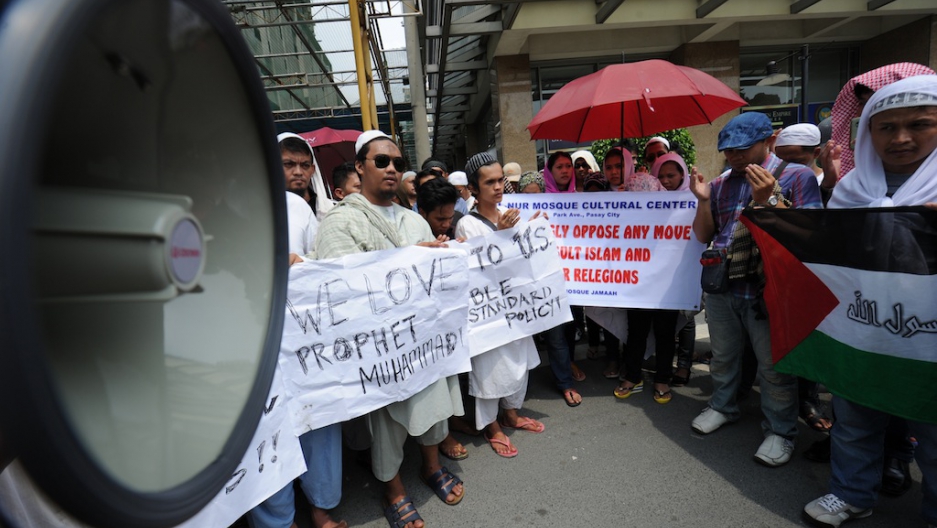 Philippine Muslims pray during a protest over the controversial 'Innocence of Muslims' movie, in front of the US embassy in Manila on Sept. 24, 2012. Hundreds of Muslims in the Philippines protested before the US embassy, calling for a ban on an inflammatory anti-Islam film that sparked deadly riots in other countries.
Credit: Ted Aljibe
Share

The United Nations, at the behest of the Organization of Islamic Cooperation (OIC), will debate, once again, the merit of blasphemy laws that could potentially criminalize religious defamation.

“We are living through a period of unease," UN Secretary-General Ban Ki-moon said last week. "We are also seeing incidents of intolerance and hatred that are then exploited by others. Voices of moderation and calm need to make themselves heard at this time. We all need to speak up in favor of mutual respect and understanding of the values and beliefs of others.”

Rev. Susan Brooks Thistlethwaite, a senior fellow at the Center for American Progress, points out in the Washington Post that "since 1999, the 56-nation Organization of Islamic Cooperation (OIC) has sought to include the issue of religious defamation in UN Human Rights Council resolutions."

Typically the West and human rights organizations have objected such laws on grounds that they would limit free speech. But this year, after an anti-Islam YouTube video sparked deadly riots throughout the world, the global mood is decidedly altered from previous years.

Courtney Radsch, program manager for the Global Freedom of Expression Campaign, said in the Spokesman-Review, ''I expect that we'll regress to where we were a couple of years ago."

She then added, ''Human rights are not about protecting religions; human rights are to protect humans. Who is going to be the decision-maker on deciding what blasphemy is?''

Turkish Prime Minister Recep Tayyip Erdogan said he would address the issue when the UN General Assembly convenes in New York on Tuesday.

It's important to remember that strict blasphemy laws can be used to suppress minorities. In Pakistan, for example, a Christian woman, Asia Bibi, mother of 5 children, was sentenced to death for "defaming the Prophet Mohammed," according to the Telegraph.