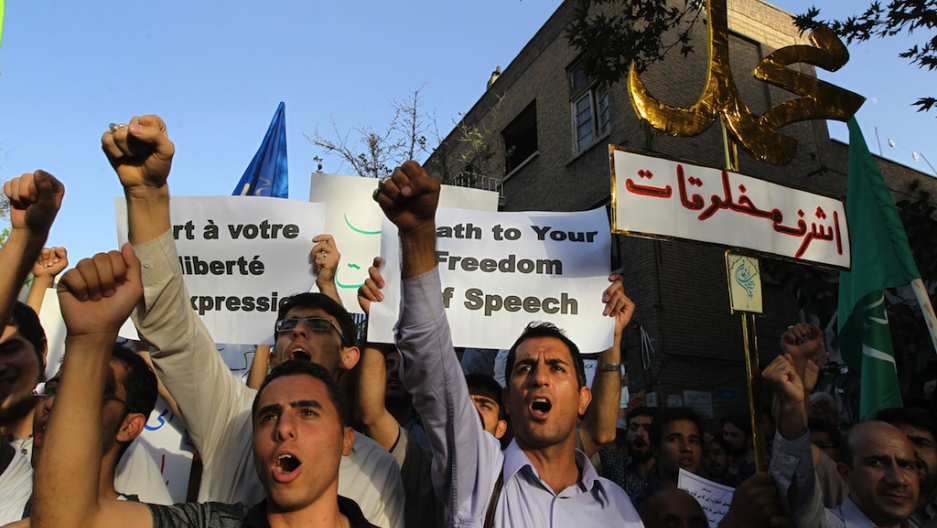 Iranians protest against the publication by a French satirical weekly of a cartoons depicting Prophet Mohammed, outside France's embassy in Tehran on September 23, 2012. Around 400 people demonstrated in front of the French embassy to protest inflammatory depictions of Islam's Prophet Mohammed in an American-made film and in a French satirical magazine.
Credit: Atta Kenare
Share

The cartoons by Charlie Hebdo prompted France to close schools and embassies in 20 countries for fear of a backlash.

"It happens that the news this week is Muhammad and this lousy film, so we are drawing cartoons about this subject," the magazine's director Stephane Charbonnier told CNN last week. "It's more turning in derision this grotesque film than to make fun of Muhammad."

Protests over the film "Innocence of Muslims" and Charlie Hebdo's cartoons have spread throughout the Muslim world, with many turning violent. A small group of protesters gathered in front of Cairo's French embassy after the magazine printed the cartoons, but there were no reported injuries, Ahram Online reported.

The cartoons by Al-Watan were published alongside writing by former Carnegie Middle East Center research director Amr Hamzawi and the Grand Mufti of Egypt Ali Gomaa about the escalating clashes, BBC News reported.

BBC described some of the cartoons in their report:

The cartoons included one showing a white man accusing an angry, bearded man of being a terrorist until he sees he is from Israel and offers him a flower instead.

In another example, two images of Arab men being interviewed for television appear side by side.

One is wearing a hat and jacket and has a small beard; the other has a turban on his head and is baring his teeth through a long beard, while carrying a bloodied knife.

A torch with the American flag for a handle is pointed at the image of the man with the knife.

Egyptians had a generally positive reaction to Al-Watan's response, applauding their fighting "thought with thought" and calling their response "civilized" in comments on the paper's website, according to BBC.