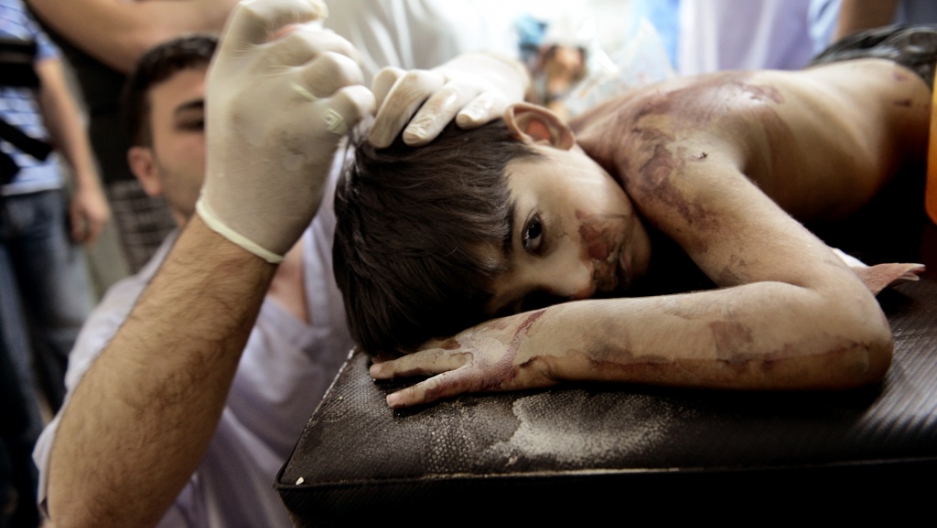 ALEPPO, Syria — A father burst through the hospital doors, a blood-drenched son in his arms. A young man followed close behind, his face blown open in the latest spate of government air raids.

In the hospital’s reception area, a little girl wailed as doctors stitched a foot torn open. Nurses rushed back and forth among the onslaught of new patients.

A boy, 11, quietly passed away on his hospital bed, and his father wept. A nurse pushed through the crowd, blood splattered across her white uniform and headscarf. “The screaming, always the screaming,” she said under her breath. “When will it end?”

This is an average day at this hospital in central Aleppo. We can’t publish its name because hospitals, ambulances and clinics are prominent targets for regime air strikes and the director fears media attention will draw increased attacks. This particular hospital has already been hit twice, with a dozen near misses.

Doctors and medical facilities have been key targets since the early days of the uprising. The remains of ambulance vehicles, bombed or destroyed by gunfire, mar the streets of Aleppo and surrounding villages. Every medical facility in town bares some damage from explosions. The doctors here say they have all been arrested at least once for their role in treating the wounded. Most were tortured.

Every day, about 70 to 100 patients pass through the doors here. Doctors estimate that 80 percent of them are civilians.

Volunteer medic Abdulrakman Haleq, 24, was a veterinary student before the revolution began. When fighting broke out in the streets of Aleppo, hundreds of doctors fled, leaving just a handful of trained professionals to deal with the medical crisis. Haleq now plays a key role, alongside dozens of other volunteers.

“These doctors made their fortune off the people, but when they were needed most, they left. Where is their humanity?” he asked.

In his time as a medic, Haleq has witnessed numerous attacks on the hospital. Its upper floors are pockmarked from helicopter gunfire and rockets have blown several rooms apart.

“Dr. Mohammed was asleep in his bed on this corner,” Haleq said, pointing to a room now completely destroyed. “I had come to my room to find a patient in my bed. I argued with the nurses about this. Our argument woke Dr. Mohammed. Just as he came down the corridor to tell us to shut up, the rocket hit and blew apart his bed.”

The extent of the damage to the hospital makes it difficult to believe, but to date no staff have been injured in such air strikes.

Most patients arrive here on the back of pick-up trucks. Although torturous and potentially fatal, transporting patients this way cannot be avoided. Of the hospital’s five ambulances, only one remains.

“I painted the roof so it can’t be recognized by air,” said the hospital’s lone ambulance driver, Sham Sadeen, who before the conflict was a wedding dress designer. “Everyday I tell my mother goodbye. Every day I see the MiG’s flying over my head.”

Sadeen said his ambulance was one of 100 donated by the Japanese government at the beginning of the year. To his knowledge, 46 have already been destroyed. But Sadeen said he has no regrets.

“Before I designed only for women. Now I work for all humanity,” he said.

When an explosion rocked the street outside the hospital, pedestrians ran for cover. Several doctors raced toward the sound of the blast to look for survivors. Sadeen rushed to his van. For the hospital, it was yet another close call.

The threat to these doctors does not come only from the air. Recently, the team discovered a spy living among them. The man arrived like a savior, bearing government-stamped medical certificates and claiming to be a surgeon.

The staff grew suspicious when he failed to understand even basic medical procedures. One operation caught on a camera phone showed the imposter searching for shrapnel in the body of an elderly woman by making several large incisions, and searching inside her flesh with his fingers and metal tools. An X-ray revealed he had been searching in the wrong location.

Hospital staff said seven patients died at his hands before his true identity was uncovered. Aware that he would have turned all of their names over to authorities, a group of nurses discussed their options in a cramped room used for taking short naps in between the chaos.

“He seemed so sweet. He drove me home twice. Now my family has to flee the city. But I can’t leave my post,” said one of the nurses, who asked not to be named.

Like many of the doctors, none of these women had prior experience in medicine. But now they are practically experts in the treatment of trauma patients.

“I came here because there is a great need,” said Amiha, 22, a former psychology student. “It’s a beautiful job, saving lives.”

Downstairs, a doctor was busy removing shrapnel from the thigh of a patient as he lay wincing on the floor of the waiting room. Guards helped a taxi driver inside who said he had been shot in the shoulder. He had driven himself to the hospital. Near the surgery room, an older man tearfully cradled the head of a bloodied young woman.

Sitting outside on the curb, Haleq took a break from the madness. To his right, the body of a man and a boy were covered with a blue sheet, waiting to be identified.

“In time, the death becomes normal,” he said, surveying the scene. “Maybe we have lost our ability to feel … maybe.”