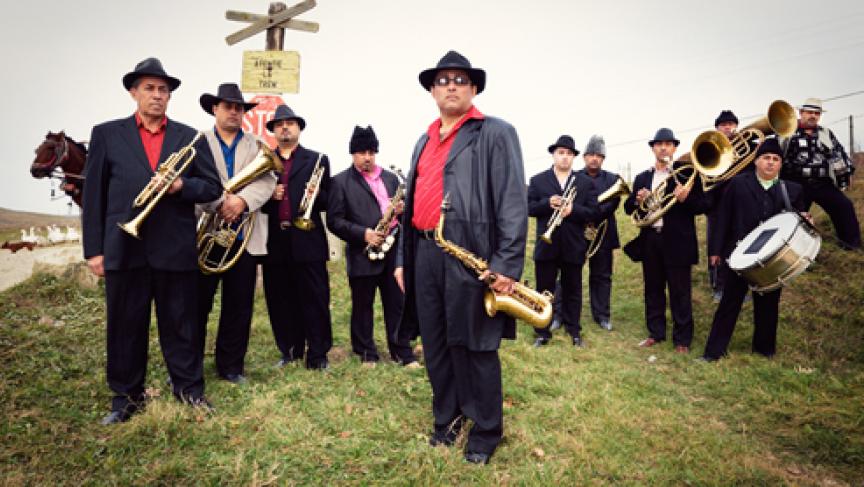 Share
Global Hit Gypsy Brass Band Fanfare Ciocarlia Rollicks Through North America By Bruce Wallace â?? September 24, 2012 â?? Post a comment The New York Gypsy Festival–a celebration of the diverse music and culture that falls under the "gypsy" rubric, is going on now in Manhattan. (Festival organizers use the terms "gypsy" and the more precise "roma" interchangeably.) The festival's headliners, a brass band called Fanfare Ciocarlia, were in town on Saturday to perform a rollicking set for a sold-out audience at Pace University's Michael Schimmel Center for the Arts. It didn't take long for that audience to get out of their seats. By the third song the aisles and floors were packed. Oprica Ivancea, the band's clarinet and sax player, was impressed. "You are a very good dancer," Ivancea told the crowd partway through the set, rather appropriately referring to the excited crowd in the singular. "In fact you are one of the best dancers which I have seen in my life. But the next song, you cannot dance. Because it's too fast." He was kind of kidding about not dancing, but the song's tempo was no joke. Fanfare Ciocarlia plays really, really fast. Costica Trifan, who plays trumpet and sings in Fanfare Ciocarlia, was coy when asked about the band's velocity. How we do it is a secret, he said, but we never set out to be so fast. We just want to make sure everyone is having a good time. Bringing the party is in the group's DNA. The 12 members hail from a village in northeastern Romania called Zece Prajin. They started playing together in school, and were soon doing village baptisms and weddings. And they might have remained on the Zece Prajin wedding circuit if Henry Ernst, a German guy who'd become obsessed with Romanian music, hadn't stumbled into their remote village one day in 1996. Within a few minutes, Ernst had a beer in his hand and about 20 musicians playing for him. "They simply blowed me away," Ernst remembered when we sat down with him shortly before Saturday's show. "It was magic, it was so powerful, it has such a humor, that I decided not to stay for one hour; it's better to stay for three months." Ernst soon had the band touring Europe, then Japan and Australia and North America. They've cut a few albums too. Their live shows blend the traditional music of their Roma ancestry with other music from the Balkans and beyond. Among the songs in that "beyond" category are the James Bond theme, Duke Ellington's "Caravan" and the Steppenwolf song "Born To Be Wild," which was featured in the movie "Borat." Costica Trifan, speaking through an interpreter, said that hits like this were always a part of their repertoire–they were, after all, a wedding band. "We always played different musical styles," he said. "Weddings would start off with traditional music, but later in the night people would start requesting ABBA or pop music or themes from TV soap operas." Their catchall repertoire and their frenetic musical delivery has won the band fans the world over. Trifan said that their popularity abroad has actually sparked a brass renaissance in their own village. "By the 1990s, people in our village had lost interest in the traditional brass music–people wanted to hear other types of songs. But now the roots–the kinds of music we play–are coming back," he said. There were glimpses in Saturday's show of what the epic, daylong parties back in Zece Prajin must be like–the exuberant dancing and clapping and shouting and singing. At the end of the show, the band came back for a second encore. Instead of taking their places onstage, they launched into a song and marched straight into the audience. They snaked through the crowd and out into the lobby. Fans circled around them. They played through chorus after chorus, notching up the energy a bit each time. You got the sense that they could have gone on forever. They didn't, though. There was an after party to get to.