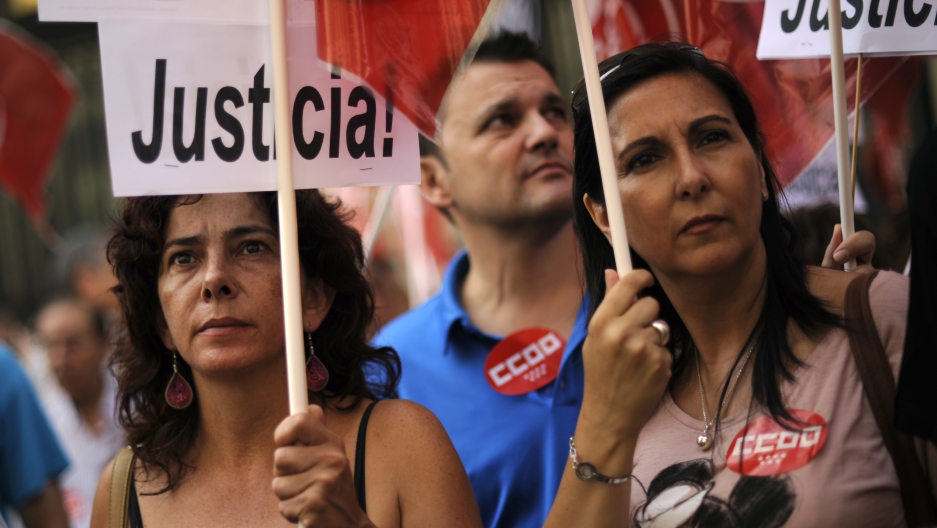 BERLIN, Germany — Three years into the global financial crisis, multinational companies that had made huge profits during the consumer boom that preceded it faced a major dilemma: people were no longer buying the expensive premium products that once sold well in Europe.

That was the complaint from the chief of Unilever’s European operations, Jan Zijderveld, who told the German edition of the Financial Times last August that “poverty has returned to Europe.”

His plan to tackle the challenge was for the world’s third-largest consumer goods company, which owns such brands as Flora margarine and Persil laundry detergent, to market its products as if to customers in Third World countries.

The company would sell more laundry detergent to cash-strapped consumers by offering smaller, cheaper packages, a strategy long employed in Asian countries such as Indonesia, where average monthly wages are less than $400.

Others are also adjusting their strategies.

Cut-price “austerity” menus are now common in restaurants across Europe. In France, elite chef Alain Ducasse is trying to entice the masses with a “buy one, get one free” deal in 1,000 participating restaurants, some with Michelin stars.

Spain, Europe’s fourth largest economy, provides a good illustration of the harsh new consumer reality in struggling economies. The country undergoing a spending boom five years ago now has a jobless rate of around 25 percent, poverty that affects 22 percent of the population and the “retail-sector performance has mirrored that of unemployment,” says the Euromonitor International market research firm.

Coffee sales, which often provide a bellwether of retail demand, fell more than 7 percent year-on-year in the first half of 2012, according to the International Coffee Organization. That points to a severe shift in consumer lifestyles in the coffee-loving country.

Billions of dollars in public spending cuts and massive personal tax hikes, among other austerity measures aimed at curtailing the country’s rising sovereign debt, “have had a significant impact on consumer habits, especially consumers with low and medium incomes,” Euromonitor said.

Many local businesses were quick to react.

Forty miles south of Barcelona, Pau Sole runs a tapas bar in the beach resort of Cunit. Located in a part of town that was mostly empty less than 10 years ago, the family-run business grew with the real estate boom that filled the neighborhood with apartments, shops and restaurants.

While most businesses in such developments have suffered since the property market crashed and the debt crisis intensified around 2009, Sole was able to buck the trend by maintaining “very popular” low prices. Sales have been going “very well” since he began offering a cut-price lunch special — two plates, a drink and desert — for only $10.

But in a country in which more than 50 percent of those under 25 are out of work, it’s often only pensioners drawing regular checks who can afford the meals.

“We had a lot of construction workers during the first years,” Sole said. “Now it’s always the elderly who pay the bill. If it weren’t for them, our business would go bust.”

Sole’s restaurant tables tell the story of a country in which the elderly are providing the social safety net for their unemployed children and grandchildren.

Thirty-five-year-old Jose Manuel Soriano, a mechanic who prospered during the bubble years, is typical of Spanish who no longer have the capacity to consume.

He recently bought an apartment north of Barcelona and ate out with his girlfriend at least three times a week. After two years out of work, however, he was forced to move back in with his parents. The rent he changes for his apartment barely covers half his mortgage.

Although Soriano now makes $1,100 a month from a commission-based sales job, “my life is very boring,” he says, “because my [unemployed] girlfriend and I don't have money to spare for leisure. Everything we do is free, such as watching movies at home or going to the beach.”

Buying ice cream is a “luxury.”

As Spanish retailers face ever-shrinking domestic demand, many are trying to entice customers from a country that isn’t so poorly off: China. Department stores are circulating Chinese-language shopping guides, shopping malls have introduced discount cards for Chinese tourists, and retailers are publicizing the fact that visitors are exempt from paying Spain’s high consumption tax, according to the Chinese business publication Stock Market Today.

That’s on top of massive discounting: 70 percent-off signs are a common in districts where luxury designer shoes, bags and cosmetics can often be bought more cheaply than anywhere else in Europe.

With the double-dip recession only growing worse, poverty marketing is probably here to stay. Euromonitor predicts household food spending in Western Europe will drop 2.7 percent in 2012 from last year. In particularly hard-hit countries such as Greece and Ireland, food expenditure is already down almost 9 and 7 percent, respectively.

However, more and more Europeans are falling completely beyond companies’ reach. In Greece, where youth unemployment is now far above 50 percent, there may soon be no one left for marketers to target.

Leta Stavroulaki, 27, an unemployed former kitchen hand from Athens who studied to become a physiotherapist, says there isn’t much she can buy at all.

Stuart Braun reported from in Berlin, Nikolia Apostolou from Athens and Meritxell Mir contributed from Barcelona.