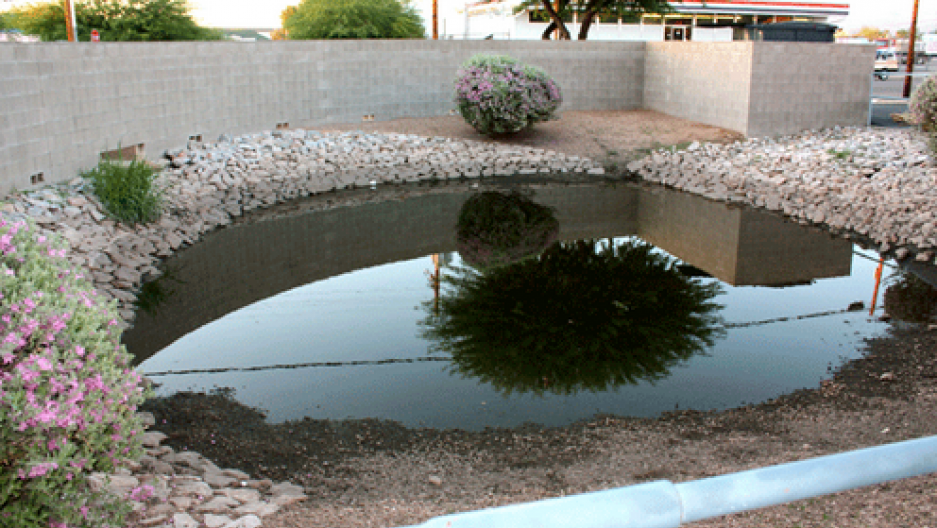 This drainage pond is big enough to attract toads to breed here after a monsoon storm but is designed to drain so fast that the tadpoles that hatch here will die before they can turn into frogs. (Photo by Sarah Bromer.)

The American southwest is typically a dry and dusty desert, yet during the summer torrential rains can spawn, streets flood and ponds suddenly appear, making prime breeding habitat for mosquitoes.

In the cities, local officials try to get rid of the standing water — but for some desert animals those brief pools can mean the difference between life and death.

Amphibians are pretty much the last animals you expect to find in a dry, dusty, desert town like Tucson, but after one, recent rain storm, a crowd gathered around a drainage pond and marveled at literally dozens of the creatures in the temporary body of water.

Phil Rosen, a research scientist in natural resources and the environment at the University of Arizona, said the animals were likely Couch’s spadefoot toads, which capitalize on these short-lived water supplies to breed.

The toads spend most of their lives underground, emerging each summer for maybe only a few nights of frantic feeding and breeding. Their eggs hatch within hours, and only seven or eight days later the tadpoles become toads.

"It’s the fastest metamorphosing species here, probably one of the fastest in the world," he said.

Unfortunately, the water in that drainage pond probably won't even last that long, meaning these tadpoles are unlikely to become frogs.

"It’s too bad because it is an ecological trap because it just seems really good for them," Rosen said, "but It’s an attractive nuisance for them, basically. It brings them into breed in a place they can’t survive."

Tucson’s building codes require all businesses to capture their run-off, so it won’t contribute to flooding, and then sink the water into the ground quickly, so it won’t breed mosquitoes.

"It exemplifies the ability and the tendency of people to just keep modifying the environment, and making it more and more perfect for people," he said "Unfortunately, there’s less tendency for there to be little corners where water lasts for two or three or four weeks ... and so I suspect there’s an ongoing, very steady decline of these species throughout most the city."

But Michael Acoba, head of epidemiology at the Pima County Health Department, said mosquitoes can be a real problem for the city. While it sees less than 12 inches of rain, over half comes during the monsoon season, which brings sudden rain and mosquitoes.

But Rosen said it's possible to allow a drainage pond to exist, and still not attract mosquitoes.

At one drainage pond, in a neighborhood squeezed between the freeway and the dry Santa Cruz riverbed, Rosen pointed out two different kinds of toads breeding. But that's not all.

"There’s all kinds of little beetles swimming around here whose larvae will eat mosquitoes. There’s a tadpole shrimp. There’s quite a few of them," he said.

But what he's not seeing are mosquitoes, despite it being the sort of standing water pool that drives health departments nuts.

Jeff Terrell works for the health department, managing its mosquito control program. He said the mosquito larvicide the department uses is generally safe for toads and other animals — though not everyone agrees.  At least one study showed BTI, a popular chemical, might sometimes target insects it’s not supposed to, and the mineral oil they sometimes use kills several of the aquatic invertebrates that serve as natural pest control.

Rosen has also been working with the department to design experimental pools of longer-standing water that use invertebrate biodiversity to control mosquitoes.

"if we simplify our environment, we’re going to end up with just the things we can’t deal with, diseases, and vectors, and things like that," he said. "We’ll either have to reengineer everything so there’s zero standing water, or we’ll have to try to live with the biodiversity and turn it to our ends."