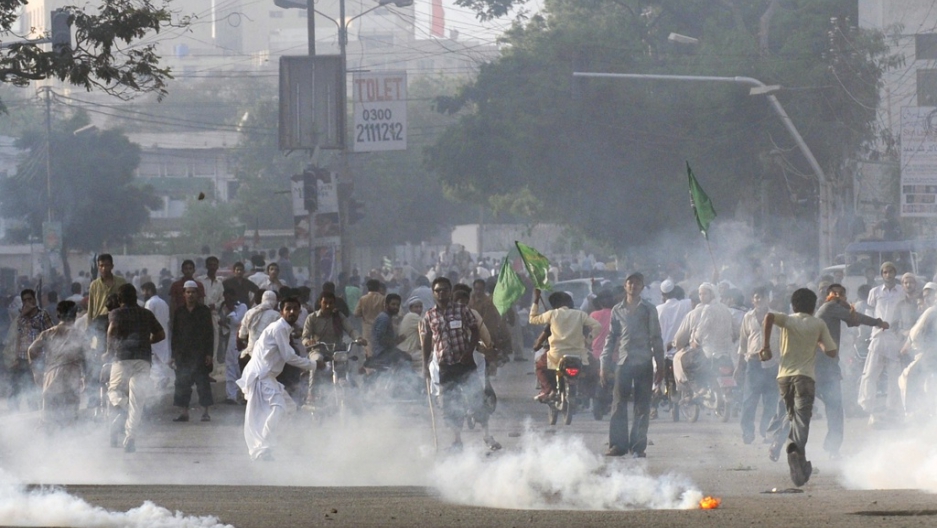 ISLAMABAD, Pakistan — Pakistan’s government declared today “Love for the Prophet Day.” But the make up of the protests, which eventually turned violent, revealed they were about more than just anger over an anti-Islam film.

Religious groups appeared at times to be competing for street presence among a plethora of political parties. At least 15 people were killed in Islamabad and Peshawar. Many more were injured.

After Friday prayers and speeches, protesters in Islamabad turned over truck containers being used to block roads leading to most embassies and the country’s parliament. They hurled stones at the police. The police hit back with tear gas and live bullets. It was dark before they managed to regain control.

“Our prophet is more dear to us than our parents,” said Qaiser Shah, a 27-year-old protester, wearing a prayer cap.

But while the love for Prophet Mohammad and anger at the perceived abuses on behalf of the West are real, observers here say the protests were motivated by other factors as well, such as upcoming elections and general frustration with the economy.

“In an election year with political and religious parties looking for issues to raise their profile, obviously you saw a lot of politicization,” said Talat Hussain, a senior journalist with Pakistan’s ExpressNews. “You also saw many banned religious outfits using this as an opportunity to make a street statement of their presence on the ground.”

Protesters carried flags belonging to both political and religious groups. Some toted flags from the banned militant organization Sipah-e-Sahaba Pakistan. In Islamabad, the cricketer-turned-politician Imran Khan gave a thundering speech.

Some Pakistanis criticized the government for creating the public holiday because it cleared the way for bigger protests — no one had jobs or school to go to. The Pakistani government has continuously given space to the religious right at the cost of more moderate voices, critics say. And today was just another example.

“They get more space through these demonstrations and show that they are present and still active on these critical issues. They take ownership of the protests,” said Muhammad Amir Rana, director of the Pak Institute for Peace Studies, an independent Islamabad-based think tank.

Firdous Ashiq Awan, the federal minister of National Regulations and Services, said her government was trying to come down on the right side of the religious parties, which often work as pressure groups.

More from GlobalPost: It might surprise you what the Arab street really things about the US

Prime Minister Raja Pervez Ashraf issued what appeared to be another attempt to appease religious groups by calling for an international law against blasphemy. The Pakistani foreign office summoned acting US Ambassador Richard Hoagland to demand that the United States government ban the film.

For some protesters it was as much a demonstation against the United States in general as it was against the film.

“This is a protest against the US and Israel. They are the masterminds behind the movie. They should apologize,” said Ajmal Hussain, 32, an assistant professor in management sciences.

Hussain said the violence that erupted also demonstrates the level of frustration with public institutions in Pakistan.

“Unemployment is rampant," he said. "The government has failed on all possible indicators. The jobless youth, the frustrated public that struggles with the daily grind of life, sees it as an opportunity to express itself."

The US government tried to quell anger by buying television and newspaper ads that showed clips of US Secretary of State Hillary Clinton and President Barack Obama condemning “the content and the message” of the film. That didn’t seem to make much differenceon the streets.

“If it's true that they have no relation with the movie, then why are they not banning it?” asked Shah, the protester with the prayer cap.

More from GlobalPost: Calm returns to Cairo. Now what?