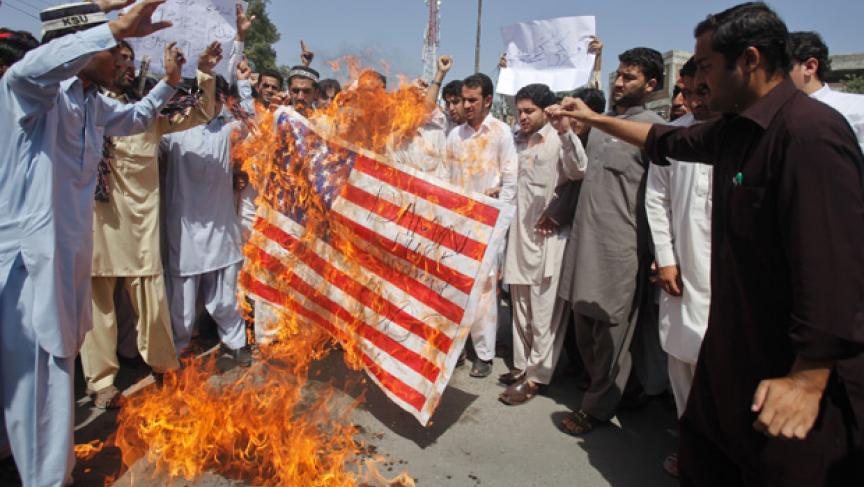 Students from different institutions burn a flag representing the U.S. during an anti-American rally in Peshawar. (Photo by Fayaz Aziz/Reuters.)

The reaction to the “Innocence of Muslims” video started a few days late in Pakistan, compared to the violent protests Egypt in Tunisia.

But demonstrations ramped up quickly.

In Karachi, an Islamic group on Sunday attempted to storm the U.S. consulate in Karachi. Police opened fire, and killed one person. Several others were injured.

Then on Thursday, gun shots rang out during violent demonstrations in Islamabad. The army was called in to protect the diplomatic enclave in Islamabad, as a crowd of demonstrators attempted to reach the U.S. Embassy.

The Pakistani government has gone on the defensive. Prime Minister Raja Pervez Ashraf ordered Internet service providers to block YouTube — all of it, not just the offending videos. Interior Minister Rehman Malik has asked Interpol to take up the matter. And he wants the United Nations to develop international legislation to stop the circulation of material deemed blasphemous.

The government even declared this Friday to be a national holiday and named it ‘Love of the Prophet Day’ — a form of protest by the government.

Not everyone is happy with the government’s reaction.

“I totally disapprove this decision of the government to observe a strike,” said Iqbal Haider a former Minister of Justice.

He’s currently the president of the Forum for a Secular Pakistan.

The Pakistan Peoples Party that controls the government is regarded as a secular party. But when it comes to issues related to blasphemy, like all previous governments in the country, it has had to appease protesters — for the love and honor of the prophet, they say.

But it’s not just Islamist extremists and radicals who are offended by the video. One of the groups marching to the US consulate in Karachi on Friday will be the Pakistan Tehreek-e-Insaaf. The party is lead by Pakistani cricket legend Imran Khan, and boasts a significant following among the country’s Western educated upper class. Arif Alvi, the party’s Secretary General, said the western, Christian world should understand that Pakistanis, and Muslims in general, have a distinct way of thinking.

Indeed, even for many of those who aren’t protesting on the streets, images of the Prophet Muhammad being insulted are hurtful. He has a prominent role, supported by both the state and popular culture. His birthday is celebrated as a national holiday every year, and there is an entire genre of poetry and music devoted to singing his praises.

The U.S. government has also gone on the defensive. Local radio stations are airing paid messages from the U.S. Embassy that include Secretary of State Hillary Clinton distancing her government from the offending video. In the video that the radio broadcasts are made from, the secretary of state looks straight into the camera.

“Let me state very clearly, and I hope it is obvious. The United States government had nothing to do with this video. We absolutely reject its content and message," she said.

But for Alvi, and many others like him, this statement is unlikely to affect their sentiments.