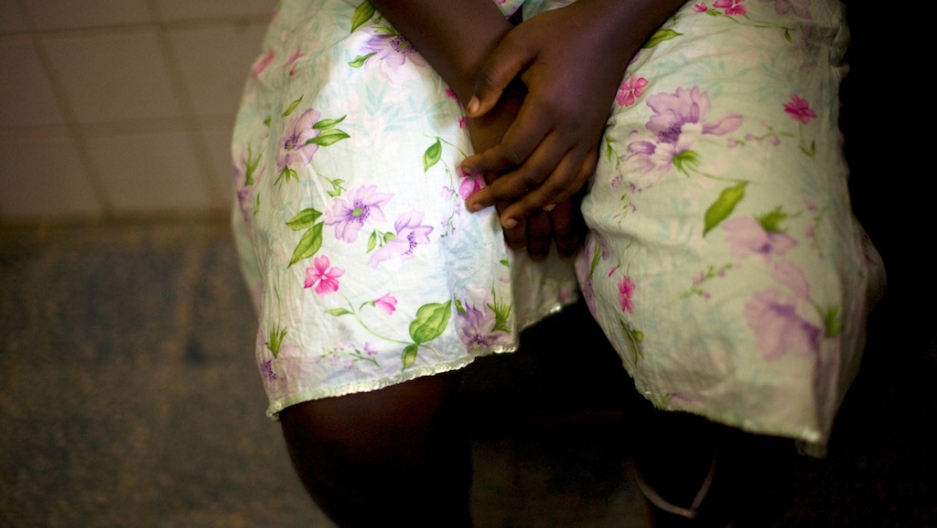 A 15 year old woman seeking medical treatment waits at a Doctors Without Boarders (MSF) clinic in Monrovia after being raped. Sexual violence against women and girls is an on-going problem in Liberia, where over half the female population has experienced some kind of sexual violence.
Credit: GLENNA GORDON
Share

Violence against females is the most widely reported violent crime in the West African country of Liberia, affecting hundreds of thousands of women and girls, says a new report from the Small Arms Survey.

Such violence has been used as a weapon of war throughout Liberia's tumultuous recent history.

According to Liberian peace and women's rights activist Leymah Gbowee, there is little education, or justice, in the areas of sexual violence and sexual health in Liberia. Although she says the country has "done well" since the civil war ended in 2003, "there's still a long way to go" in the country with the worst teen pregnancy rates in West Africa – 3 out of 10 teenage girls get pregnant, she told students at Northeastern University this week.

Many believe the violence ended with the peaceful election of the current president, Africa's first democratically elected female head of state, Ellen Johnson Sirleaf, the truth is that violence against women and girls (shortened to VAWG for the purposes of the brief report) continues in the country, although steps are being taken by both the government and international organizations to end the trend.

Liberia is a unique country in that it was founded by freed American slaves, and was a generally stable sub-Saharan country until the late 20th century, when a series of civil wars, mostly fueled by ethnic strife and political corruption engulfed the country under the leadership of convicted war criminal Charles Taylor, who made rape and sexual violence cornerstones of his tyranny.

But despite Taylor's May conviction at the International Criminal Court and subsequent 50-year sentence for “aiding and abetting, as well as planning, some of the most heinous and brutal crimes recorded in human history,” according to the New York Times, Liberia still bears the scars of years under Taylor's influence.

The resulting culture is one where rape and outrageous forms of sexual violence are incredibly prevalent. Reports differ, but somewhere between 60 and 70 percent of women in Liberia have suffered some kind of sexual violence, and Time magazine reports the number could be as high as 90 percent.

More from GlobalPost: Students can save the world: Annual conference focuses on sustainable development

The Small Arms Survey report, "Liberia Armed Violence Assessment: Peace Without Security," [PDF] which compiled data based on nearly 3,000 interviews in both urban and rural areas of Liberia "indicates that the majority of victims are young girls who are on average just under 19 years old.

However, the victims are some­times far younger. A rape counsellor at the Du Port Road Clinic in Monrovia observes that most of her rape cases involve girls and young women between five and 17 years old.

The report includes excerpts from interviews with survivors, some of whom have not yet reached adolescence.

It's difficult to know why this particular part of wartime culture has endured, because there is no existing study on perpetrators of sexual violence that seeks to "gain insights into why they inflict such abuse on women and in particular on young girls—sometimes even on girls below the age of five."

Economic vulnerability may play a significant role, as women and girls are often sent to live with relatives because their immediate family cannot provide for their welfare. Many live in urban areas and beg on the streets in a country where the majority of the population lives below the poverty line.

Some believe gender-based violence stems not only from cultural traditions predating the war, but also "cases are sometimes related to ‘ritual­istic practices’ and beliefs that sexual intercourse with a virgin can lead to professional and financial success," says the Small Arms Survey.

During the second civil war, Gbowee, who won the 2011 Nobel Peace Prize along with then-soon-to-be President Ellen Johnson Sirleaf, organized the Women of Liberia Mass Action for Peace group, which has been noted for playing a large role in precipitating peace negotiations by peacefully assembling the women of Liberia to band together against the violence of men, using a sex strike and other similar threats, the women were successful in ending the war, officially. But there is still work to be done, paying attention to the residual effects.

Gbowee is now an internationally known speaker and activist who runs the non-profit Women Peace and Security Network Africa (WISPEN-A), said this week at a conference in Boston that the "moral voices in the country are shrinking" and there is still much work to be done in Liberia and in Africa in general, when it comes to calling attention and finding solutions to problems like VAWG.

Another large problem is the stigmatization that follows a survivor of sexual violence can impact the rest of her life, sometimes to the point of suicidal tendencies and an inability to provide for herself and her children.

The situation is marginally improving now, since President Sirleaf implemented a National Gender-Based Violence Plan of Action, which has devoted $15 million between 2006 and 2011 to education, health services and economic empowerment for women who have been victims of VAWG, as well as legal system reforms, which badly needed because "available statistics show that 45.3 per cent of rape and sexual assault cases resulting in an arrest end up in court," according to Small Arms Survey, and most rapes and gender-based violent crimes go unreported.

International funding helps, certainly, but Gbowee believes the West must set an example with actions not just money.

"From our perspective in Africa, women in the US and the western countries lead the trends - just as they lead the trends for fashion and style," Gbowee told GlobalPost at the Millennium Campus Conference this week. "There is a lot of responsibility on their shoulders to guide some of these discussions, because the way it is shaped in their countries will help to shape it substantively in other countries. A lot of the governments of countries across the world take cues from the US and other developed nations."

Part of the National Plan of Action included setting up UNICEF-trained officers in Women and Children Protection Section (WACPS), offering services such as safe houses, and medical and psychiatric care, in police stations around the country. According to the report, "by 2008, WACPS units had been opened in all 15 of Liberia’s county capitals" and they seem to be working.

That said, it's the women that need to fight for themselves, following the example of Western women, says Gbowee, not just rely on institutions to do the work, especially because international, often Western, aid workers have been accused of perpetuating the problem in a number of African countries, including Liberia.

"If the issue of women's rights is still a contentious issue in [the US], and if the women who these issues are affecting are silent or almost silent on it, the trend is that we will see some of these things rise up in our own communities," said Gbowee, explaining that when American women are silent on issues of women's rights, that attitude permeates the developing world. "We also need the media to speak about these issues and speak about the global trends. Because we need to stop telling our women back home that this is the trend, and this is what we need to prepare ourselves to fight."

For more of GlobalPost's coverage of women's rights, check out our Special Report "Life Sentence: Women & Justice in Afghanistan."