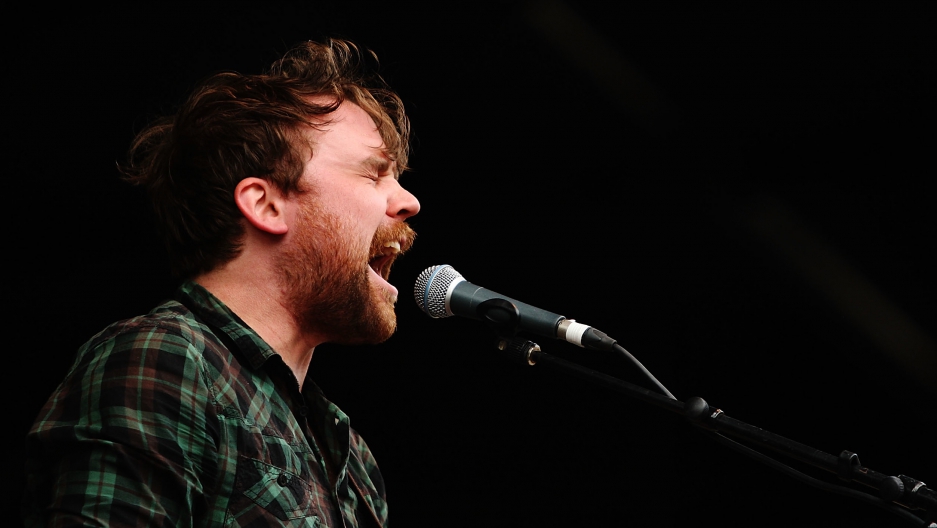 EDINBURGH, UK — Frightened Rabbit doesn’t do sunny. The Glasgow-based rock band serves up dark musings about love and life that seem tailored for the mood at closing — and often throwing-out — time in some of the city’s rougher pubs.

Lead singer Scott Hutchison performs in a raw style he describes with the kind of self-deprecation that’s a staple of Scottish humor. “We definitely try to provide substance over style,” he says, “though that may be simply because our style sucks.”

The national talent for celebrating failure permeates the band’s bleak-sounding repertoire, which exudes an underdog vibe that’s gone down well across the Atlantic: The band has built up an enthusiastic American following.

Remarkably, it managed to do that bypassing the British music industry’s traditional style arbiters in London. Indeed, the band was relatively unknown in the UK capital until recently.

Its success reflects a newfound cultural confidence projected by a recent crop of Scots bands, including The Twilight Sad and We Were Promised Jetpacks. They sing with Scottish accents, for a change, voicing lyrics the way they’d be spoken in everyday life. And they share a do-it-yourself approach to getting heard at home — London be damned.

The bands are making their mark through grassroots events and rapidly expanding festivals at home. “Scottish bands are finding their own voice,” says journalist Olaf Furniss, who created Born to be Wide, a regular night on the Edinburgh circuit aimed at rallying the local music scene.

The new cultural vim is sweeping across the art scene to theatre, dance and literature. Among its proponents, Edinburgh theatre director Cora Bissett says she no longer feels it necessary to “please the big boys of London.”

“We don’t have to be anything other than what we are,” she elaborates. “We can do this in our own voice.”

It’s tempting to link the cultural revival to the country’s drive for political independence. But Bissett and others in the artistic avant-garde play down the Braveheart factor. “It’s not overtly political,” she says. “There’s a strong undercurrent of artists keen to engage with the Scotland we live in right now.”

Staying out of London’s “rat race” provides benefits, including “a lot more freedom” that’s allowing her contemporaries to reshape Scottish theatre by drawing on traditions such as 70s agitprop and experimenting with newer European styles.

Another advantage may seem paradoxical: Avoiding England appears to have increased Bissett’s appeal there. Her play “Roadkill,” an uncompromising take on the sex industry that involved transferring audiences out of the theatre into the squalor of an inner city flat, sold out in London last year after packed performances in Edinburgh and Paris.

This year, Bissett brought together some of Scotland’s best novelists, musicians and playwrights for an experimental recounting of nocturnal tales from across the country, from playwright Stef Smith’s lovelorn regrets by the shores of Loch Lomond north of Glasgow to a paean to the joys of chips and cheese by Eugene Kelly of the band the Vaselines.

However, the revival of Scottish identity isn’t entirely apolitical, as visitors to this year’s Edinburgh International Book Festival may have noticed. Novelist Irvine Welsh, author of Trainspotting, demolished the London-based Man Booker Prize, noting that only one Scottish novel — James Kelman’s 1994 How Late it Was, How Late — has ever won the coveted award. The Booker prize is “based on the conceit that upper-class Englishness is the cultural yardstick against which all literature must be measured,” he said.

It’s all been a long time coming, according to crime writer Ian Rankin. He believes Scotland’s artistic search for identity was prompted by the failure of a 1979 referendum on independence. “At that time, a lot of artists started to ask what makes us different from everyone else,” he said. “It made a lot of people think about what it meant to be Scottish.”

Scotland gained a degree of autonomy with the establishment of a national parliament in 1999 under a program of political devolution. The Scottish National Party, the SNP — which campaigns for Scottish independence — won a majority last year, and the government plans to hold another referendum on independence in 2014.

Rankin says his recent novel The Impossible Dead — inspired by the true story of a Scots nationalist found dead in his car with a bullet in his head in the 1980s — “makes points about how politics have changed in the UK.”

“With an SNP government in place in a devolved Scotland and the tension this brings with the UK government, you can’t help but be aware,” he says. “If you live here, that will drip feed into the work you do, whether you realize it or not.”

For poet James Robertson, it all comes down to semantics. He co-founded children’s book publisher Itchy Coo in 2002 to help rehabilitate Scots, one of Medieval Europe’s great literary languages.

“Today, Scots is portrayed as bad English or slang,” he says. “If you’re told you speak the language of the gutter, it’s got to have a negative effect on the way you think, not just about language, but also about yourself.”

In his view, Scots is as different to English as Norwegian is to Swedish. He’d like to see his native tongue become “the language of education and serious discourse.”

Whatever happens in 2014, the drive to promote Scottish culture is clearly no mere artistic fad, but part of what its proponents say is a movement to reclaim the nation’s soul.

“Political independence isn’t absolutely necessary,” Robertson says, “but it would be helpful.”