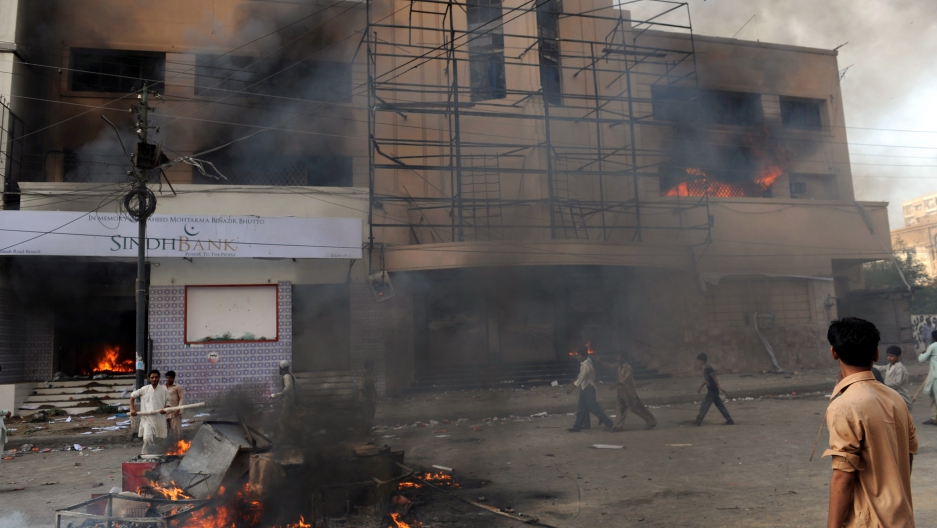 Pakistani Muslim demonstrators are pictured in front of a burning cinema during a protest against an anti-Islam film in Karachi on September 21, 2012.
Credit: AFP/Getty
Share

Protesters filled the streets of several cities in Pakistan on Friday for a day of government-sanctioned protests against the anti-Islam film, "Innocence of Muslims."

The crowds turned violent and The New York Times reported that as many as 19 people may have been killed in the protests, according to a Pakistani television station.

The southern city of Karachi saw between 12 and 14 people killed, according to Pakistani news media, while protests in the northwest city of Peshawar also turned deadly.

Bloomberg reported that police were fighting back agitated protesters who were trying to reach American diplomatic missions in the country.

The first person to be killed in the violence was a driver for a Pakistani television station. The Associated Press reported that Mohammad Amir was killed when bullets hit his vehicle in Peshawar. Kashif Mahmood, a reporter for ARY TV, told the AP that he was sitting in the car with Amir at the time of his death.

Pakistan's government had declared Friday a "Day of Love for the Prophet Muhammad."

Pakistani Prime Minister Raja Pervez Ashraf said in a speech to politicians and religious leaders, "An attack upon the Holy Prophet is an attack on the whole 1.5 billion Muslims. Therefore, this is something unacceptable."

Ashraf further called on the United Nations and international community to create a law outlawing hate speech across the world, according to The New York Times. He added, “Blasphemy of the kind witnessed in this case is nothing short of hate speech, equal to the worst kind of anti-Semitism or other kind of bigotry."

A doctor at the city of Peshawar's main hospital told Reuters that at least five protesters were hurt following the torching of two cinemas and multiple clashes with police.

Reuters further reported that just outside of Islamabad, protesters set fire to a motorway toll booth. On Thursday an estimated 1,000 stone-throwing protesters clashed with police as they attempted to force their way to the US embassy.

An Interior Ministry official, speaking on condition of anonymity, told the AP that cell phone service was suspended in 15 major cities to prevent militants from using phones to detonate bombs during the protests.

In an effort to distance the US from the anti-Islamic film, the US State Department has spent $70,000 in advertisements to run in Pakistan. The ads feature President Obama and Secretary of State Hillary Clinton both denouncing the film.

Protesting is not unique to Pakistan, of course. Protests against the film and the US have taken place all over the world. On Friday, protests were reported in Indian-controlled Kashmir, Iraq, Sri Lanka, Bangladesh, Malaysia and Indonesia, the Associated Press reported.