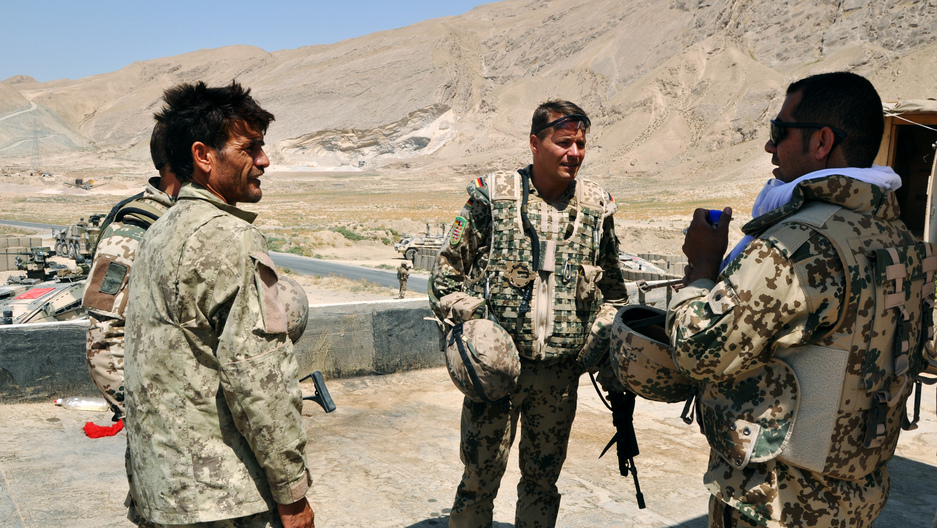 German Capt. Thomas Spranger, center, and Afghan Sgt. Abdul Nazir talk at a checkpoint in Baghlan province Aug. 22, 2012. Joint patrols between the forces have been suspended after a rise in green-on-blue attacks. (Photo by Sabine Siebold/Reuters.)

Defense Secretary Leon Panetta, at a press conference last month, almost wrote off so-called green on blue attacks as a sign of the Taliban’s desperation in the face of coalition gains in Afghanistan.

Trying to explain the spike in ‘insider’ attacks this year, he said, “the reality is, the Taliban has not been able to regain any territory lost. So they’re resorting to these kinds of attacks to create havoc.”

But by the Pentagon’s own estimate, only about 10 percent of green-on-blue attacks involve Taliban infiltration.

Since almost all the attackers are killed, it’s difficult to determine a motive. But the overwhelming majority of Afghans who turn against the International Security Assistance Force, or ISAF, apparently make the decision to do so on their own. For many observers, that’s scarier than Taliban infiltration.

“It’s very, very worrying because it implies a level of mistrust and suspicion between Afghan Security forces and the international troops, which is very extreme and disturbing,” said Rory Stewart, a conservative member of the British parliament who has travelled extensively through Afghanistan.

He says tensions often grow from cultural conflicts — whether subtle offenses from tone of voice, eating and drinking boisterously during the day during Ramadan, or more overt disrespect. And such slights and misunderstandings are inevitable.

“The longer you’re there, the more distrust builds up ... I’ve been in Afghanistan on and off for 10 years, speak an Afghan language, but I’m still capable of causing offense without intending to because I’ve misunderstood the context of a situation," he said. "I think it’s not realistic to expect that you can train 120,000 foreign soldiers to have ideal diplomatic skills.”

If cultural problems weren’t intractable enough, there are other profound problems that are pushing Afghan soldiers and police to the breaking point. Candace Rondeaux, the International Crisis Group’s senior analyst based in Kabul, says frequently green-on-blue attacks are precipitated by green-on-green conflicts.

“One of the things that really complicates the situation is that relations between Afghan rank and file soldiers and police are often very fraught. There are factions at work, political factions, within the military, within the police, making it difficult for the typical Afghan soldier to get along, get his salary, and do his job without interference," Rondeaux said. "That is something ISAF has to grapple with, the political implications of factionalism that is driving some of the insider attacks.”

All that stress, combined with the trauma of combat, can make for a volatile mix.

“But what we don’t often hear about is the low morale on the frontlines every day,” she said. “These guys sign up for three year contracts, they’re in places like Helmand and Kandahar, and they’re under a great deal of stress.”

She says the spike in green on blue attacks could be directly related to the increase in fighting since the 2009 surge.

“Afghan soldiers are going out there much more often on the battlefield, they’re encountering a lot more serious firefights, the stress levels are very high," she said.

There is no discussion of PTSD in Afghanistan — in fact, Rondeaux says there’s a strict taboo about discussing that sort of vulnerability.

Coalition forces have announced in the wake of the increased green-on-blue violence that they are revamping and improving the vetting process for Afghan soldiers and police. But it’s hard to imagine how they could screen for these kinds of issues.

And given the demographics of the force, Stewart says it’s misleading to even talk about vetting.

“This is a very, very rough and ready hurried attempt to try to build up a massive Afghan security force, often out of illiterate villagers," Stewart said. "And therefore I think vetting is completely unrealistic.”

The ISAF commanders in Afghanistan may have come to the same conclusion. On Monday, General John Allen ordered that joint patrols with Afghan and ISAF forces be suspended until further notice. The new arrangement may protect U.S. forces, but it may not work out as well for the Afghan forces now going on patrol alone.