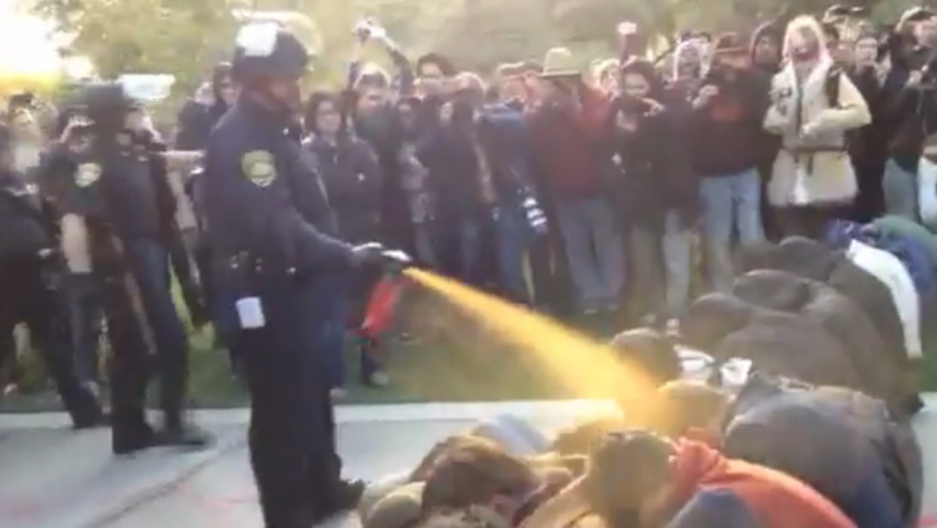 A still from a video showing a UC-Davis police officer spraying protesters with pepper spray.
Share

The University of California, Davis police officer who doused non-violent students in pepper spray will not face criminal charges, the Associated Press reported. On November 18, Officer John Pike approached a group of Occupy protesters who were seated with their arms linked together on campus. For no apparent reason, he began dousing them in thick, orange spray.

The campus police department faced a wave of bad publicity from the incident, with the chief of police eventually resigning. On July 31, the new campus police chief fired Pike, the AP reported.

But while Pike is now out of a job, he also gets to avoid jail time because the Yolo County district attorney decided not to file criminal charges. Despite widely-available video footage of the incident, the DA concluded that "there is insufficient evidence to establish proof beyond a reasonable doubt that the use of force involved in the November 18, 2011, pepper spraying was unlawful and therefore warrants the filing of criminal charges," KXTV reported.

The news comes one week after the University of California regents approved an undisclosed financial settlement for the 21 students who were victims of the incident. Even before the settlement, the pepper-spraying has cost the campus over $1 million in legal and other fees, the Sacramento Bee reported.