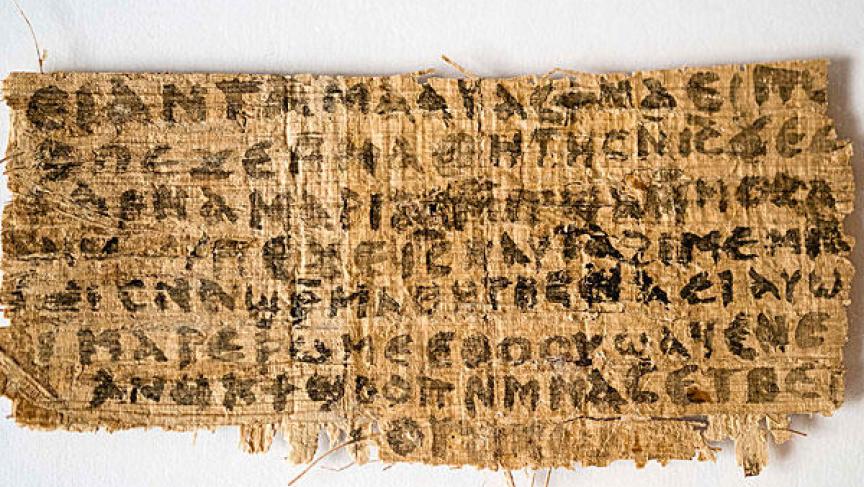 A Harvard Divinity School expert says this scrap of papyrus is legitimate, as in not a forgery, and contains references to Jesus' wife. (Photo courtesy of Karen L. King/Harvard University.)

If a tiny scrap of ancient papyrus, no larger than a business card, can challenge hundreds of years of religious belief, the one unearthed by a researcher at the Harvard Divinity School just might do it.

Karen L. King, a historian who has published several books about new Gospel discoveries and is the first woman to hold the nation’s oldest endowed chair, the Hollis professor of divinity, on Tuesday revealed that a scrap of papyrus, written in Coptic and appearing to be from the fourth century, A.D., quotes Jesus as saying "my wife." No other mainstream scripture refers to Jesus as being married. The scrap of papyrus also refers to a female disciple.

King says a number of other scriptures, however, never made it into the Bible most Christians know — and that those other scriptures, of which this appears to be just one part — give a fuller idea of what it means to be Christian.

King said a number of Christian texts have been discovered in Egypt over the last hundred or so years. In one instane, an Egyptian found 13 papyrus rolls, which King said have revolutionized how we look at Christianity.

"These are mostly early Christian texts that show us the path not taken," King said. "The way the winners get to tell the story their way and silence other voices."

As for the revolutionary scrap, King is not revealing who it belongs to or where it came from. The owners have asked to remain anonymous. Papyrus and Coptic language experts say it appears, however, to be legitimate.

That presents the potential to reignite a centuries-old debate about the role of women in the Christian faith, especially the Roman Catholic Church. The Vatican has repeatedly refused to consider women as priests, saying that Jesus' example must be followed.

But King, speaking to The New York Times and a few other news organizations, cautioned that it's hard to call this conclusive evidence that Jesus was married — as it was likely written centuries after his death.

“This fragment suggests that some early Christians had a tradition that Jesus was married,” she said to the Times. “There was, we already know, a controversy in the second century over whether Jesus was married, caught up with a debate about whether Christians should marry and have sex.”

The owner of the text, who according to the Times reached out to King in 2010, says he wants to remain anonymous so as to avoid being hounded by people looking to buy the manuscript. King says she'll push him to come forward — if for nothing else then to keep people from using this as part of a conspiracy theory.