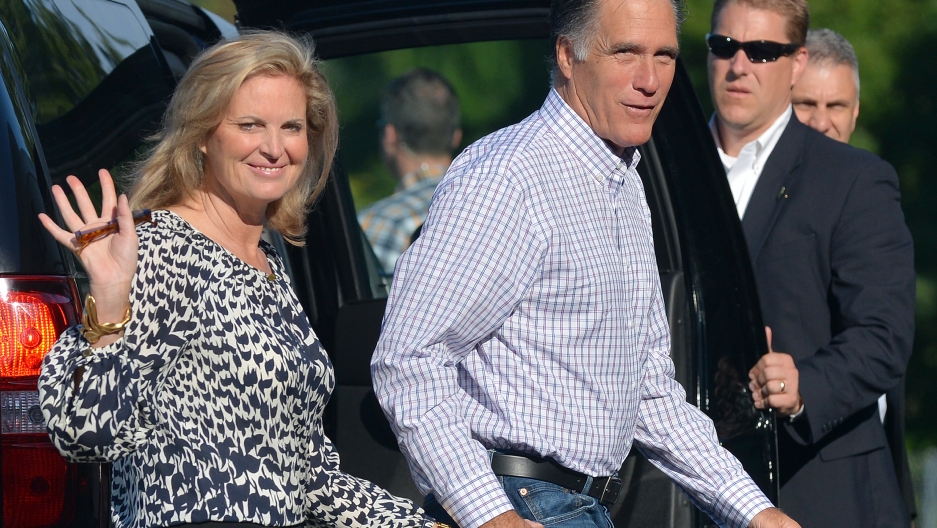 US Republican presidential candidate Mitt Romney and his wife Ann in Wolfeboro, NH. On television, their visits, like the much publicized Fourth of July, look like a love fest. But weary locals say the Secret Service presence is a big turnoff.
Credit: Jewel Samad
Share

WOLFEBORO, NH — It’s not hard to see why this exquisite town calls itself the Jewel of Lake Winnipesaukee. With an azure fall sky overhead, the sun glistening on the water, life is sweet in this central New Hampshire town.

But the charming decor is slightly marred by the plethora of campaign signs dotted around lawns and bolted onto buildings. While there is a huge Obama-Biden billboard on the way into town, once you reach Wolfeboro the message is much more tilted to “Believe in America.”

Wolfeboro is, at least officially, a Mitt Romney town, the site of the former Massachusetts governor’s multimillion-dollar lakeside compound.

The residents of this relaxed, upscale New England idyll are pondering the future with a bit of trepidation. Their most famous summer guest has already brought the world to their doorstep, causing some upheaval in their normally serene existence. And, if he gains the White House in November, Romney might just make Wolfeboro the sort of household name that Hyannis Port and Kennebunkport became when their famous residents, the Kennedys and the Bushes, respectively, led the world.

“I would not call it upheaval,” said Mary DeVries, executive director of the Wolfeboro Area Chamber of Commerce. “We are pleased when celebrities or politicians choose to spend time in Wolfeboro, and our experience with the Romneys has been very positive.”

New Hampshire is considered a swing state; recent polls put Obama five points ahead, but there is still a fairly large pool of undecided voters who could tilt the race in either direction.

That ambivalence can be felt in Wolfeboro, with less than two months to go before the election.

The flood of reporters and Secret Service has been a boon to local hotels, inns and restaurants, say some. Ashley, a waitress at a Wolfeboro eatery so posh it just calls itself The Restaurant, claimed that the place had been mobbed all summer, despite its empty rooms on a recent Sunday afternoon.

“We are always busy,” she laughed. “I am not sure what’s happening today.”

Amid the soba noodles and roasted avocado with goat cheese, The Restaurant maintains a strictly non-parti

san flavor, insisted Ashley. “I hear people arguing both sides of the debate,” she said. “But when it comes to politics, I stay out of it.”

Romney himself had never been in, she said.

“The best place in town, but he’s never come,” she shrugged.

Almost right next door, Lydia’s Café has a much more, er, democratic air. People in jeans and flannel shirts sit on the patio, consuming burgers and other hearty fare.

Marybeth Bryant, the owner of the adjoining Made on Earth clothing store, was less enthusiastic about the political storm that was ruffling the calm waters of Wolfeboro life.

“My sales were down all summer,” she said. “Other merchants I know say the same. The Secret Service may have taken all the hotel rooms and given business to the restaurants, but they kept the tourists away. People hate seeing those big black cars. It is a very cold presence. ”

One major beef that local residents had with the Romney entourage was the Fourth of July parade, which is normally a big celebration in Wolfeboro.

In numerous media reports, the event looked like an outpouring of love and admiration for the local celebrities.

In reality, say those who were there, not so much.

“He just screwed up the Fourth,” said Donita Coburn-Amadio, a native of the area. “There is usually a great hometown feeling to the day, and it was just interrupted by all the Secret Service presence. Nobody wanted to see Romney.”

“It just turned into a giant Romney rally,” said another resident, who did not want to give her name. “The Obama people were also out of control, and the two sides started shouting at each other. It turned into the kind of thing you would not want to take your kids to, and that’s really too bad.”

But the Chamber of Commerce’s DeVries denied that this year had been significantly different from others.

“If you had never been to one of our parades, maybe you’d look at what happened and say ‘wow,’” she laughed. “But in Wolfeboro it’s always ‘wow.’”

Election year politics may have played some role, she conceded.

“There were a greater number of politicians,” she said. “And their friends and families came to the parade as well. Anywhere you have two political parties, tension is a possibility.”

Some merchants chose not to participate in the parade because of the Romney presence, said Bryant. She herself was taking a more passive role than usual.

“This is the first year I have not worked for the campaign,” she added. “I just cannot.”

Bryant supports the president, although she concedes that she is not in favor of all of his policies.

“I think Obama was handed such an awful plate,” she said. “But he is a man of integrity, of honesty.”

This is not a sentiment she extends to the Republican challenger.

“I think Romney is out for the haves,” said Bryant. She said she had not seen the interview between Romney and “Good Morning America” host George Stephanopoulos, in which the candidate opined that the middle class was “$200,00 to $250,000,” but said she found it “terrifying.”

“It reminds me of George W. Bush,” she said. “I keep thinking, ‘how can this man be running for president?’”

Bryant said that her store, which carries flowing, natural fiber clothing, comfortable footwear and aromatherapy candles, had not yet attracted the potential First Shopper. The candidate’s wife is famous for her extravagant tastes — in May she appeared on “CBS This Morning” in a $990 T-shirt.

“Ann Romney doesn’t come in here,” she laughed. “We can’t afford her kind of clothes.”