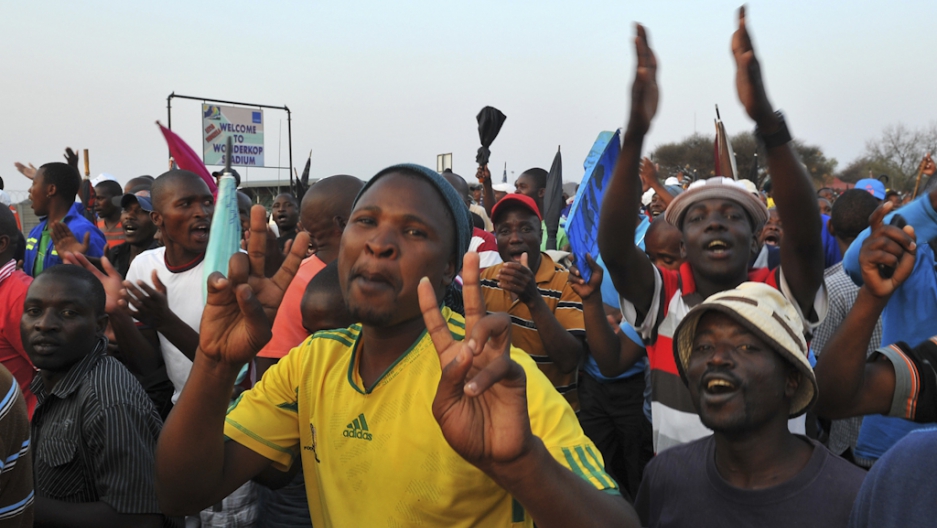 A man flashes the victory sign after striking miners secured a 22 percent pay hike from London-listed Lonmin platinum mine in Marikana on September 18, 2012. The miners will resume work on September 20, ending a deadly six-week wildcat strike which started on August 10 and spread to other platinum and gold mines in the country, triggering growing concerns that the industrial action would dent the economy of Africa's wealthiest country.
Credit: ALEXANDER JOE
Share

JOHANNESBURG, South Africa — Workers at South Africa's Marikana platinum mine are set to return to work Thursday after agreeing to a wage deal that includes a 22-percent pay rise, ending a nearly six-week strike that saw 45 people killed.

Under the agreement, signed late Tuesday, the miners will also receive a once-off payment of 2,000 rand (about $240).

The wildcat strike began August 10 at the mine near Rustenburg, northwest of Johannesburg, owned by London-listed Lonmin PLC.

The action at Marikana sparked strikes and protests over wages at neighboring platinum, gold and chrome mines, with workers demanding monthly pay of 12,500 rand ($1,500).

Among the 45 people killed in violence during the strike were 34 shot dead by police during a protest on August 16, in an incident that shocked the nation.

A day after announcing a crackdown on strikers, the South African government on Saturday sent in hundreds of police, backed by soldiers and military vehicles, to raid workers' shacks for weapons including machetes, spears and clubs.

Bishop Joe Seoka, a mediator, on Tuesday informed cheering workers gathered at a stadium near Marikana mine of the deal, which was later signed with Lonmin management.

According to the South African Press Association, under the agreement, rock drill operators will receive 11,078 rand a month before deductions.

"We are happy with the latest offer; it is better than what the workers got before they went on strike," Seoka told SAPA.

Simon Scott, Lonmin's acting chief executive, described the agreement as "only one step in a long and difficult process which lies ahead for everyone who has been affected by the events at Marikana."

“These have been difficult and tragic weeks for everyone involved with the company, the communities living around our operations and the South African
nation as a whole," Scott said in a statement.