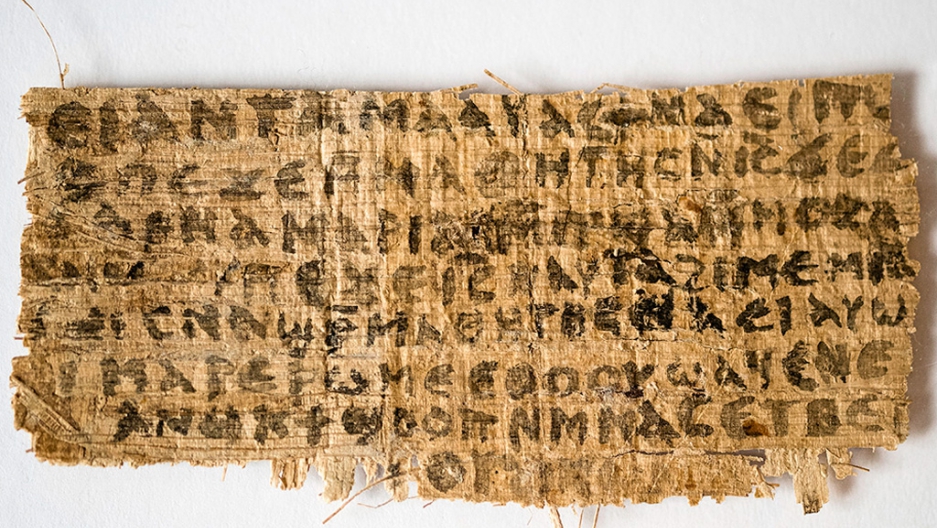 Professor Karen L. King presented a small scrap of papyrus today at the International Congress of Coptic Studies in Rome that includes the phrase, “Jesus said to them, my wife.”
Credit: Harvard
Share

A Harvard scholar unveiled evidence Tuesday that will likely stoke the debate about a married Jesus Christ.

Professor Karen L. King presented a small scrap of papyrus at the International Congress of Coptic Studies in Rome that includes the phrase, “Jesus said to them, my wife.”

Dubbed the Gospel of Jesus’s Wife, it also includes the line, “she will be able to be my disciple,” and references to Mary, who King said might be Mary Magdalene.

Christianity has long debated if Jesus married Mary, the first person reputed to have seen Jesus after his resurrection.

The papyrus is torn from a larger piece, meaning text from all sides is missing.

King, a professor at Harvard Divinity School, said that phrase has never before been seen in scripture.

“Christian tradition has long held that Jesus was not married, even though no reliable historical evidence exists to support that claim,” King told the Harvard News Office.

She cautioned, however, that the 1 1/2- by 3-inch scrap of fibrous material isn’t definitive proof that Jesus was actually married.

More from GlobalPost: Bulgaria bones might be from John the Baptist

She also said the papyrus was likely written hundreds of years after Jesus’ death, in the fourth century.

The text was likely translated from a second-century Greek text, King told the Boston Globe.

“It’s not saying we’ve got the smoking gun that Jesus is married,” she said in the Globe.

Further testing and scrutinizing is needed to confirm the document’s authenticity.

Carbon dating would destroy the artifact, so King will use tests to determine its age based on chemical composition.

The Harvard Theological Review plans to publish the research in January.

King obtained the papyrus two years ago from a private collector who wanted her to translate the ancient Egyptian Coptic writing.

The collector asked to remain anonymous.

At first blush, she said, it appeared genuine.

The grammar, lettering, ink and condition of the document are consistent with the time period.

King enlisted Roger Bagnall at New York University and associate professor of religion AnneMarie Luijendijk at Princeton to help her verify the papyrus.

“It’s hard to construct a scenario that is at all plausible in which somebody fakes something like this. The world is not really crawling with crooked papyrologists,” Bagnall told The New York Times.