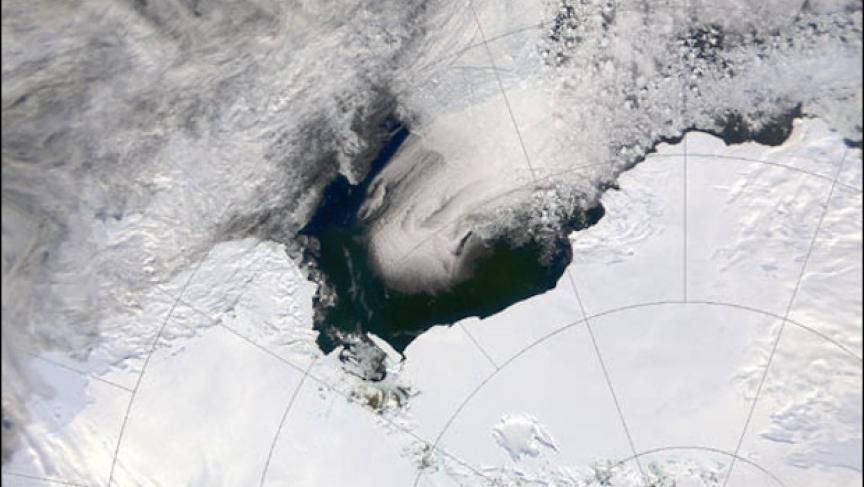 If British explorer Sir Ranulph Fiennes is successful in his trek across Antarctica, he and his crew will meet an ice breaker at the edge of the Ross Sea in Antarctica, this time next year. (Photo by SeaWiFS Project, NASA/Goddard Space Flight Center.)

Temperatures can fall to 100 degrees below zero during the Antarctic winter — and that’s just one of the challenges that will face a six-person team getting set to go on six month trek across the frozen continent.

The expedition led by British explorer Sir Ranulph Fiennes gets underway next year. The ice trek will depart from the Russian Antarctic base of Novolazarevskaya, then traverse 2,000 miles via the South Pole to reach Captain Robert Scott’s old base that looks out on McMurdo Sound and beyond to the Ross Sea.

Fiennes, the 68-year-old British explorer leading the expedition, has an impressive resume. He's climbed to the summit of Mount Everest, and trekked to the North and South Poles on foot.

But this could be one of his most dangerous expeditions. Fiennes and his team are hoping to trek on foot across Antarctica in the middle of winter.

“We are setting out for six months at the beginning of the winter,” he said. “The penetration record from the coast inland in the winter is 60 miles, we’re crossing a place which is ice, at an average of 10,000 meters (about 6.21 miles) above sea level, complete darkness because the sun disappears for the winter, and for 2,000 miles there will be no doctors available, and no rescue facilities on the entire continent should you need rescue, so yes, you don’t want to run into problems.”

But there are a number of other hazards facing the team. Ice crevasses in the summer are a big difficulty. In the winter, in whiteout conditions, they’re a huge difficulty and the risk of severe frostbite, and mental fatigue will be a constant.

It’s fair to say it’s a dangerous trek. So why do it?

“It is the last polar, geographical challenge which humans haven’t yet managed to deal with, for very good reason and we hope that we might be able to deal with it. We don’t actually know if we will, but humans whether they’re pioneering in space or trying to break the sound barrier or whatever it is, you don’t really know what lies ahead if you can’t learn it from previous attempts, which you can’t because they’re haven’t been any,” Fiennes said.

Fiennes, who is past typical retirement age has already had major heart surgery; he's also lost fingers to frostbite. But he says his biggest concern is whether his group's skis and snow tractors can endure the extreme conditions. Fiennes’ team will travel on skis, but will be followed by two snow tractors, towing two living quarters, supplies, equipment and tons of special fuel adapted against freezing

“I’m not frightened of physical stuff happening to me because I’m pretty ancient, and if you go you go, anybody can go. I’ve had a good time. But in terms of being frightened of what the steel and rubber might do at a certain temperature, we’re all a bit apprehensive about that,” he said.

The expedition gets underway Dec. 6, but they'll wait along the Antarctica coast until March for the proper winter conditions. The team will set off on skis across the ice shelf that killed explorer Captain Robert Scott, and his team a century ago.

If this team successfully crosses Antarctica they’ll be met by an icebreaker ship that will cross the Ross Sea to retrieve the team.