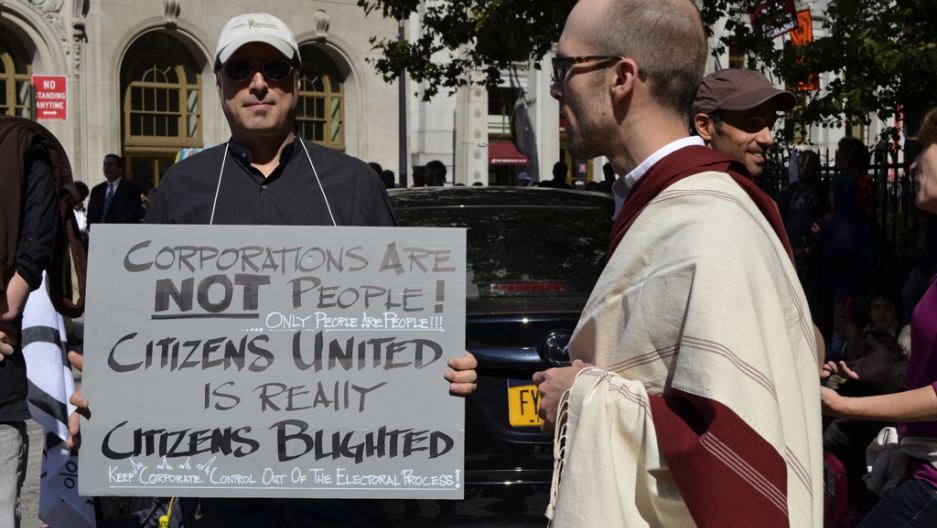 Protesters gathered in front of the National Museum of the American Indian to mark the one year anniversary of the Occupy Wall Street movement on September 17, 2012.
Credit: Priyanka Boghani
Share

NEW YORK — The Occupy Wall Street movement, which celebrated its first anniversary by staging protests near Wall Street in New York City, has taken activists from many disparate groups under its umbrella, but some common themes and shared frustrations emerged as GlobalPost talked to protesters on the street.

Joe Therrien, puppeteer with Occupy Wall Street Puppetry Guild (People's Puppets): "Get all private money out of politics. Campaign finance, publicly financed campaigns, would be a transitionary step to starting to have some sanity back in the way we're governed. I think it's always been a problem, but with Citizens United and the way the last few years have gone, we need a change. No money in politics. There's no chance for anyone who doesn't have a lot of money to have a voice in our government. That's not what America is about. Everyone's supposed to have equal political power, and right now the power of the rich individuals so dwarfs of a poor person or a homeless person or even a middle class. It's ridiculous and it's broken our system."

Marina, a protester: "I'm going to vote for Obama, although I've been very ambivalent about his presidency. I still think he's a better choice than Romney. I think that his hands are tied by the political system we're protesting today. I don't agree with everything he's done. Obviously, I prefer him to Romney, but there are a lot of people here who won't vote for him, who did last time. They're really really angry and disappointed. I'm a little more pragmatic about it. I feel like the electoral system is the system we have, and I'm trying to be an activist on both fronts."

"Occupy does not trust the political process as it's acted out today. It does not feel that our two-party system with vast amounts of corporate money is a viable solution for democracy."

Annette Gilly, member of Occupy Gainesville: "We need to be a functioning democracy again. We're not a functioning democracy if our elected officials are representing someone other than the people. That's, in fact, what's happening now... they're representing oil companies, pharmaceutical companies, the war industry. There are a lot of issues and they're all tied together, and the link is that we're not a representative democracy anymore, that the power is in the hands of a very few."

"We're not even trying to have an impact on the elections. The Democrats pretend to listen to the people, but they don't. The Republicans at this point are not even pretending to listen to the people, they just use a great deal of propaganda, to justify supporting business interests over human interests. The propaganda is to convince people that your neighbor is the problem. That there are suddenly all these lazy people in America, and all these immigrants taking your jobs. That isn't what crashed the economy. That isn't why we're in the fix we're in. They are the reason we're in the fix we're in. It's the system, more than it's either party."

On the Occupy movement:

"This world is already crumbling. It's so unbalanced that it's tearing itself apart. If we create a beautiful, viable alternative, people will come to it. And that's what we saw in Zuccotti. We were creating our own systems, we were governing ourselves and people just flocked to that place. Direct democracy... people never tasted that before."

Marina: "Last year the focus was on the actual occupation of the park. In the intervening year, there has been a lot more focus on outreach, and on research, and on making connections with other movements. There's union involvement now, women's groups, eco groups, so there's been a lot of coalition building over the past year. I think what's important for people to understand about Occupy is that it's not quantifiable. The number of people here in the square is not an accurate reflection of the movement."

"It's brought the issues of the 99 percent into the public debate. Just the fact that that term is commonly used now is a victory. You have people from different political movements working together to achieve something. There's been a re-energization of the relationship between unions and other aspects of the left, which is really critical and had not been so healthy in recent years."

Gilly: "It has to be an umbrella movement. You don't want to exclude anyone if you say you're speaking for the 99 percent. You can't decide which issues are important and then have a few demands. All of these issues are tied together by the fact that the interests of the people are not being taken care of. What we need to do is continue to educate the public, which is happening on a very one-to-one basis. We're converting our relatives, our neighbors, our co-workers."

"Ultimately, we're going to have to put a firewall between all that money and our government. We have to overturn Citizens United. We have to have publicly funded campaigns."

On the anti-US protests in the Middle East:

Therrien: "Across the world, people are being oppressed, clearly not just in America. I think it's so frustrating that there's no outlet for that anger, no matter what culture we're in. People have to blame someone, that anger has to be funneled somewhere. The first step has been to call out what we see as the problem, and... I would hope that they're calling out some of the policies of the government that they don't agree with or that have been causing them problems. I would hope that they know the American people certainly don't want to have confrontation and conflict with them.... That's not in any way to justify the killing of innocent people or the death of the ambassador, I don't want that to be seen as the case. But the raw, emotional energy underneath that is the reality of an oppressed world, an oppressed civilization."

Marina: "I think what's important to realize about the protests is, it's not just about the video, it's about what America stands for on the international scene. In some ways, I very much agree with their protests because they're looking at America, which is hugely influential. It's bankrupted international financial dealings, it's investing in all kinds of terrible energy, it doesn't treat women well, and it doesn't treat its children well. What exactly are we standing for on the international playing field?"

"I think the video was a spark for a more generalized anti-American sentiment, some of which I understand."

"We all know that they make up reasons to invade countries. No one believes them. The American people do not believe that we invaded Iraq for a reason that was justifiable. We do not believe we should be in Afghanistan. We certainly don't think we should be flying killer robots in the skies over other people's countries without warrant. The people would never agree to something like that, but we have no voice in our government."

The Occupy protesters seemed to share a common disdain for the current political system, prefering to operate outside of it. The elections coming up in November don't appear to be any kind of milestone for Occupy, which outlines more vague and loftier goals of creating sustainable, parallel systems as alternatives to the current one, rather than working to change it from within. By design, the movement is an umbrella group with activists from all parts of the political, economic and social spectrum, which makes it more difficult to pin down a concrete set goals and beliefs, but on some issues the activists echoed each other's sentiments.