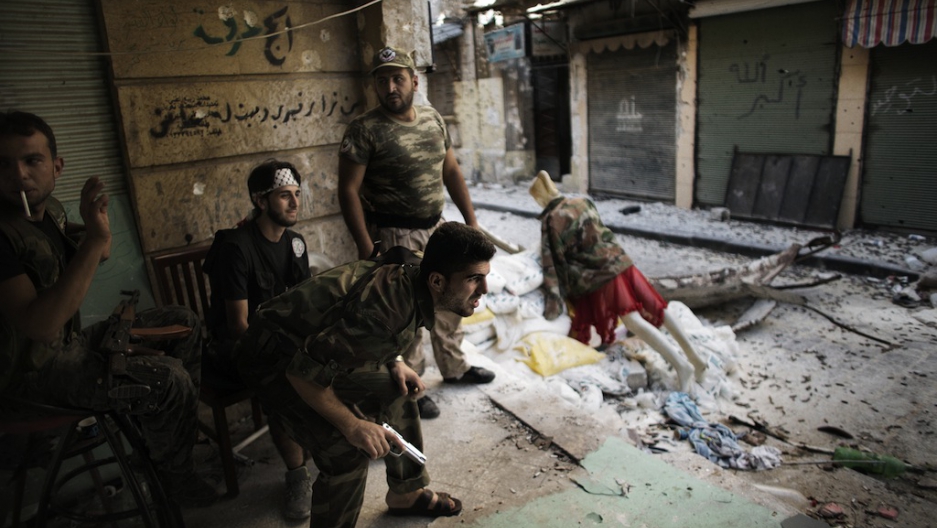 Free Syria Army fighters man a position in the city of Aleppo on Sept. 16, 2012. More than 27,000 people have been killed since the uprising against President Bashar al-Assad's rule erupted in March last year, the Britain-based Observatory estimates. The United Nations puts the toll at 20,000.
Credit: Marco Longari
Share

United Nations human rights investigators said on Monday there is evidence that points to the increased presence of radical foreign fighters within the ranks of the Free Syrian Army, the Associated Press reported.

Paulo Pinheiro, leader of the UN inquiry into Syria's civil war, said he was concerned about the new development.

"Such elements tend to push anti-government fighters towards more radical positions," he said during a meeting of the UN Human Rights Council, according to the AP.

The UN statements come a day after a commander of Iran's Revolutionary Guard Corps said that Iranian forces were involved in the conflict, according to the Washington Post.

The commander said soldiers in its Quds Force were working in Syria to support the regime of President Bashar al-Assad, according to the Post. He said these members were not involved in direct combat.

“Reports by some Arabic and Western media, citing ... Jafari were selective, false and with political aims,” Foreign Ministry spokesman Ramin Mehmanparast told the Iranian television station, according to Reuters. “Iran has no military presence in the region, especially in Syria.”

More from GlobalPost: On Location: Life and Death in Aleppo (VIDEO)

The UN has also said that it has the names of people it believes may be responsible for human rights violations and war crimes, The New York Times reported.

"A second confidential list of individuals and units believed to be responsible for violations is being provided to the High Commissioner of Human Rights," Pinheiro told the council, according to Al Jazeera.