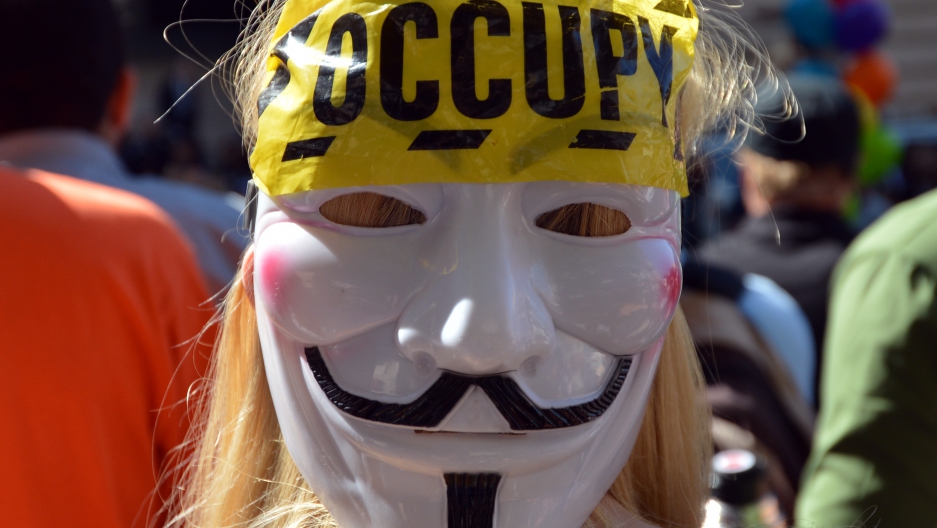 Occupiers took to the streets again on September 17, 2012, to mark the one year anniversary of the Occupy Wall Street movement.
Credit: AFP/Getty
Share

It has been one year since the first protesters stepped foot in New York's Zuccotti Park to occupy Wall Street.

On Monday, protesters once again assembled in lower Manhattan. Priyanka Boghani, reporting for GlobalPost from New York, noted a heavy presence of police and groups of several hundred protesters. Movement protests were also planned for Boston, San Francisco, and Oakland.

The group's original message was to defend the 99 percent of the US population against the wealthiest 1 percent. Their message was simple: spread the wealth.

But organizing was not as simple. An October 2011 article in The New York Times noted that the Occupy protest on Wall Street moved into its fifth week with no clear demand or plan. At the time, the group began to assemble an action committee called the Demands Working Group, to help formulate a coherent mission.

Although the mission and demands varied from Occupy tent to Occupy tent, two goals became clear: jobs and civil rights for all. The Declaration of the Occupation of New York City further detailed these demands.

One year later, the mission remains the same, but the process has changed.

"Occupy began as a primal scream against the monied corruption of our democracy," Adbusters, the Canadian anti-consumerist publication who conceived of the Occupy movement, wrote in a blog post commemorating the one-year anniversary of the movement's first steps. "But after a year of struggling against an unrepentant corporatocracy, our goals are now deeper, our dreams wilder. We see a common thread emerging — a blue-green-black hybrid politics — that unites and elevates our movement."

The blue, Adbusters said, will work to "eradicate the commercial virus infecting our culture," by liberating a flow of information, and "champion the leakers."

The green will push for the environmentalists working to pursue a "worldwide de-growth economic agenda funded by a Robin Hood Tax and establish an across the board true cost market regime in which the price of every product tells the ecological truth."

The black will work to restore "the dominion of people over corporations by all nonviolent means necessary."

In other words, today they march, tomorrow they plan and take to the "streets" of the world wide web. Adbusters said it will unleash a wave of memes and cultural interventions against "financial fraudsters, paid-for politicians and megacorporate outposts in our cities."

On Twitter, users hailed the return of Occupy, while some attempting to traverse lower Manhattan scorned it. Others noted that while it may be the one year anniversary, it is only the beginning for the Occupy movement. Here are a few Tweets gathered from the hashtag #S17.