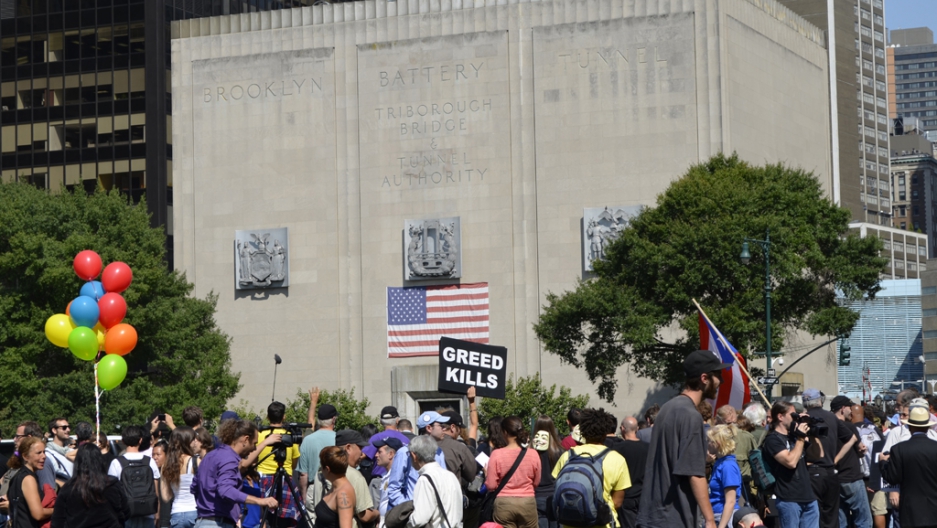 Protesters gathered in Battery Park to mark the one year anniversary of the Occupy Wall Street movement on September 17, 2012.
Credit: Priyanka Boghani
Share

NEW YORK — Hundreds came out in New York City on Monday to join the Occupy Wall Street protest as the movement marked its first anniversary.

Around 10 a.m., protesters walked towards Wall Street with the aim of surrounding the New York Stock Exchange, but were blocked by police barricades. NBC reported that roughly 100 protesters were believed to have been arrested for staging sit-ins nearby.

Protesters also gathered in Battery Park and in front of the National Museum of the American Indian to mark one year since protests began under the "Occupy Wall Street" movement. Some were dressed in costume, while others carried banners, flags and placards. One sign read, "This city was built by the working class," while another cried "Destroy plutocracy, restore democracy."

Many protesters held up signs for specific causes, including fracking, health care and the Chicago teachers' union. Though they represented many causes, however, the crowd seemed united in its frustration with the status quo.

Joe Therrien, a puppeteer who is part of the Occupy movement, stood under a banner that said, "All of our grievances are connected." That seemed to be the common message — even among the communist groups, anarchist groups and others espousing strong ideologies. Therrien said all the issues that the Occupy movement has been protesting are connected to money and to Wall Street.

But Therrien, who was arrested on the Brooklyn Bridge during last year's protests, said it had been difficult for the movement to organize without access to Zuccotti Park. Protesters were cleared from the park by police on several occasions during the last year.

Most of the protesters seemed disillusioned by the current political status quo, too, saying that President Barack Obama was only slightly better than Republican presidential candidate Mitt Romney.

"There's a big divide on whether to engage and influence the elections or not, but regardless, the presidential elections are the one time, in America, where everyone is in some way thinking about politics. We need to use it as an opportunity, not to fight for Obama or fight against Mitt, but to expose that they're both corrupt, that they're both bought out by Wall Street," said Therrien.

Marina, another protester, said she was ambivalent about Obama, but that she would still vote for him because he was better than Romney. The sentiment echoed by several protesters seemed to be that money was the biggest problem in the current political system, though the degree of their cynicism with regards to change varied.

Annette Gilly, who flew to New York from Gainesville, Florida, for the protests, said that Democrats at least pretended to listen to the issues that concern the Occupy movement, while the Republicans used propaganda to push their agenda. Both Gilly and Therrien said they would be voting for third party candidates.

There was heavy police presence all around lower Manhattan, with New York Police Department police standing around Wall Street's iconic bull statue and around Battery Park. Many of the cops carried plastic handcuffs and were lined up, prepared for movement.

Ann Wilcox, a lawyer from Washington, DC, was there as a legal observer for the National Lawyers Guild. As of 1 p.m. on Mondat, she said there had been dozens of arrests, but nothing that would constitute mass arrests. "New York is big time, and the relationship with the police is more tense. They tend to get very physical here," she said.

At a time when protests against the US are breaking out across the Middle East and beyond, the Occupy protesters seemed to empathize with the sentiment, though they did not condone the violence in Libya. Marina said, "It's sad, but it's understandable," referring to the protests in the Middle East and North Africa. She said the protests showed that there were radical and disenfranchised people around the world. "It's not just about the video, it's about what America is representing overseas," she said.

Therrien said, "I would hope [anti-US protesters] understand that the American people certainly don't want to have confrontation and conflict with them. We've looked a lot to the Arab Spring with solidarity, but I wouldn't equate what's happening now to the Arab Spring."

He added, "The raw, emotional energy [behind the protests] that sometimes gets funneled into a mob is the reality of an oppressed world."

The one-year anniversary protests are scheduled to continue Monday evening.