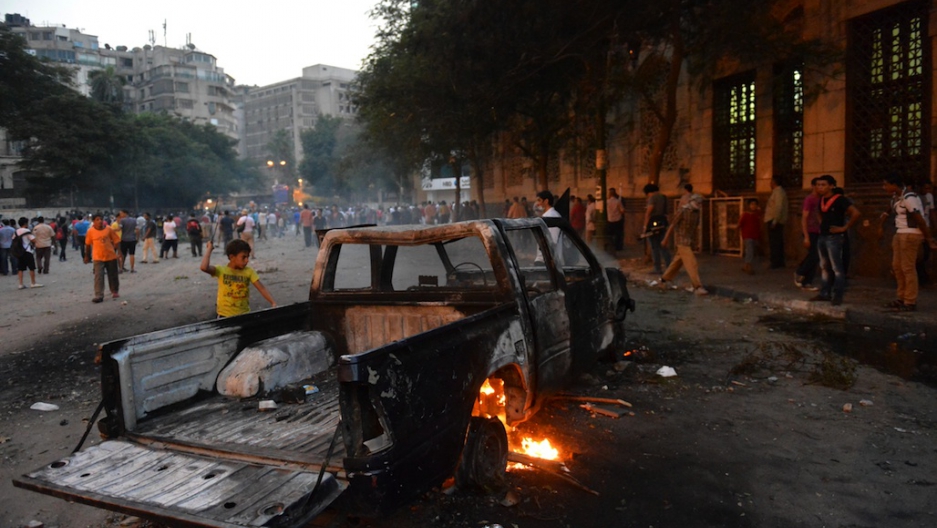 A burnt pick-up truck is seen during clashes between Egyptian protesters and riot police near the US embassy in Cairo on Sept. 13, 2012. Protests have erupted since Sept. 11 outside US diplomatic missions in several Arab and Muslim states by demonstrators who deem the low-budget movie 'Innocence of Muslims' made in the United States as offensive to Islam.
Credit: KHALED DESOUKI
Share

Anti-US protests sparked on the anniversary of 9/11 by anger over a YouTube video that denigrated Islam have now spread to close to 20 countries.

While the film itself has been inflammatory and controversial, deeper issues have since been highlighted as the more likely sources of anger at the US: for example, drone strikes and other elements of US foreign policy.

More from GlobalPost: A clash of civilizations? Not so much

Still, much of that analysis about root causes of anti-US anger has been anecdotal.

To better quantify the issues behind the protests, GlobalPost contacted Dina Smeltz, a public opinion and foreign policy fellow at the Chicago Council on Global Affairs who has spent years doing survey work on Arab opinion at both the US State Department and as a consultant.

She answered our questions about what has fueled recent anti-US protests, the role of religion, and how much the rapid spread of anger represents a singular trend.

Below is an edited version of the exchange.

While it was a video that appeared to spark initial protests in Cairo last Tuesday, anger and unrest, primarily targeted at the US, has now spread to some 20 countries in the Middle East, Africa and Asia. What is the trend we're seeing here, the common theme that unifies this anger?

The reaction from Arab publics is similar to that surrounding the Danish cartoon controversy from 2005 or calls for Koran burning from an American pastor in 2010, though this time the response is more violent. Many people currently protesting have probably not themselves seen the video, but the incident has inflamed long-held resentment and suspicions of the United States.

Surveys have shown than Muslims abroad believe that Americans do not respect Muslims or Islamic traditions. Several polls have found this pattern, including Gallup polls across the Muslim world. The video played right into this way of thinking.

The protests may also reflect dissatisfaction with US/western foreign policies. Various survey research has shown that anti-American sentiment is usually based primarily on anger at US foreign policy rather than a clash of cultures or values, including: Muslims’ longstanding perceptions of a pro-Israel bias in the Palestinian-Israeli conflict, opposition to the US invasion of Iraq, the US handling of the war in Afghanistan, and actions the US has taken to combat terrorism, including drone strikes. A recent Pew survey found that about nine in ten in Egypt and Jordan, eight in ten in Turkey and seven in ten in Tunisia oppose the use of drone strikes (as do majorities in several non-Muslim countries).

Many Muslims also view US efforts to combat terrorism (i.e., the war on terror) as a pretext for a war against Islam. PIPA surveys from 2006 to 2007 asked publics in Morocco, Egypt, Pakistan and Indonesia which of three goals was the primary objective for the US war on terror. The surveys found that no more than two in ten people in any of these countries said it was to protect the US from terrorist attacks. Majorities thought it was either to weaken and divide the Islamic religion and its people or to achieve political and military domination to control Mideast resources.

It will be interesting to watch how Americans interpret events on the ground. There has been a noticeable drop in US economic support for some longstanding allies. For example, for the first time since 2002, a slight majority of Americans say economic aid to Egypt should be decreased or stopped altogether, according to a survey the Chicago Council on Global Affairs released last week. Recent events are likely to harden this view.

What about domestic anger in each of the countries where protests have come up? Are we seeing anger over local issues being expressed at external targets?

In the past, analysts have often interpreted some of the outrage in similar protests to be a way that the US-backed regimes in the Middle East (like Mubarak’s, for example) could allow their publics to let off steam about not only US policy, but also — without verbalizing it — about their own governments. But today, the protests in Tunis and Cairo appear more focused on the US or western policies, since the new governments have put more distance between themselves and the US. In those countries where freedom of speech or criticism of the government is not tolerated, there is an underlying, unspoken criticism of the regime and its close ties to the US. To Muslims abroad, American support for autocratic forces in the region is seen as hypocritical, because it runs counter to US ideals of promoting democracy.

How much can we generalize the movements in these different countries?

The protests across the region share considerable similarities, including language and symbols, though of course the individual politics in each country is different. Recent polls reveal that many Muslims abroad have been disappointed after heightened expectations that US policy in the Middle East would be different under President Obama. Both Pew and Zogby polls have found that favorable opinion of the US has slipped across the Middle East since 2009, after Obama took office (both survey outfits recorded initial increases from the 2008 Bush-era lows). Currently, Pew reports a median 15 percent favorable view of the United States among Muslims in Egypt, Jordan, Lebanon, Pakistan and Turkey, down from 25 percent in 2009.

Besides having specific objections about the policies and to the offensive portrayal of Muhammad mentioned above, large majorities of Muslims (and non-Muslims in many places) believe the US acts unilaterally and does not consider the interests of other countries. Our own survey of American opinion shows that many in US also want the US to be more multilateral and cooperative.

Regardless of the roots of anger, it seems religion has been a catalyst in most of these protests. How significant to this story are perceptions of anti-Islamic sentiment in the US?

Islam offers guiding principles to every aspect of life; consequently, most Muslims around the world interpret insults to their religious figures and traditions as insults to their way of life. Moreover, Islamic tradition forbids the depiction of the prophet Muhammad in an image, because it might lead to idolatry (Jews have a similar tradition forbidding rendered images of god, and Christianity has had its own iconoclastic traditions).

So that’s the surface observation. American disrespect towards these symbols and traditions, whether real or imagined, is not good for the image of the US among Muslims. Abu Dhabi’s Gallup Center found that when asked about several ways the West could show greater respect for Muslims and Islam, seven in ten Muslims said that Western efforts to abstain from desecrating the Koran and Muslim religious symbols would be “very meaningful” to them.

What Muslims really want from the US is to be treated with respect, which is why President Obama’s speech in Cairo highlighting a new beginning based on mutual respect struck a chord with Muslims around the world.

How does the American public feel about the future of relations between Muslim nations and the US?

Americans remain uncertain about how the Arab Spring will play out. Last week’s Chicago Council survey found that slightly more Americans expect developments following the Arab Spring will be more positive (34 percent) than negative (24 percent), though a plurality (37 percent) say they will have no impact. That survey preceded these latest events, however.

Chicago Council Survey results also show that a slight majority of Americans do not see a fundamental conflict between Islam and the West. But four in ten believe that because Muslim and Western traditions are incompatible, violent conflict is inevitable, and the recent events in Libya have probably not helped persuade them otherwise. Americans still view the Middle East as the greatest source of future threats, but they have been chastened by the last ten years of war and want to lighten the US presence there. Two in three Americans do not think the wars in Iraq and Afghanistan were worth the cost or that the wars made them safer from terrorism. In fact, most believe the wars have worsened relations with the Muslim world.

The map below shows the countries where protests have spread since Sept. 11, 2012.