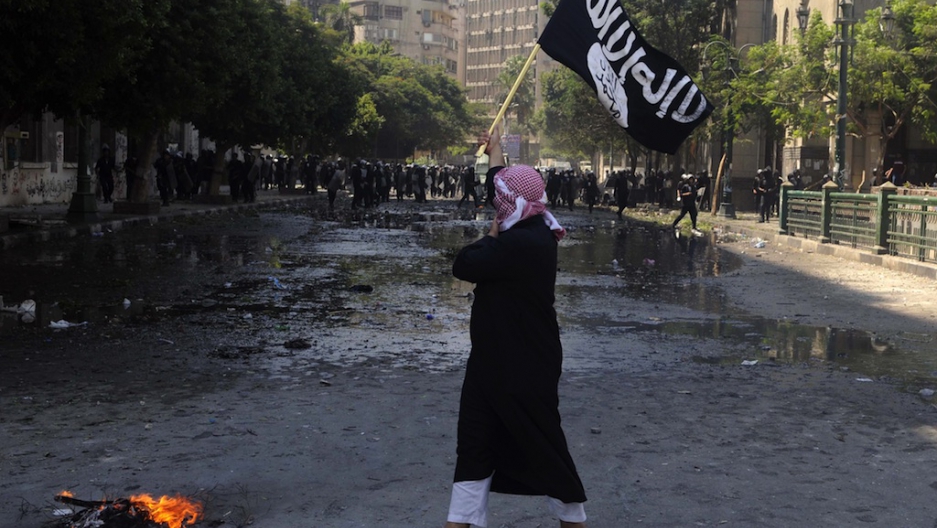 An Egyptian protester holds an Al-Qaeda affiliated flag in front of the riot police near the US embassy in Cairo on September 14, 2012 against a film mocking Islam. Just a few young protesters pelt rocks randomly, with no response from police as the clashes subsided after Egypt's Muslim Brotherhood withdrew calls for nationwide protests, saying they would instead participate in a 'symbolic' demonstration.
Credit: Stringer
Share

CAIRO, Egypt — An uneasy calm hung over the area surrounding the US Embassy in Cairo on Sunday, after four days of clashes sparked by demonstrators protesting an anti-Islamic internet video produced in California – and that engulfed nearly the entire region – finally came to a halt.

Local shops re-opened, traffic flowed through a nearby square, and workers, guarded by fresh barbed wire erected to protect the embassy grounds, painted over the anti-American graffiti tagged on the building’s walls.

Egypt’s riot police made sweeping arrests in an early morning crackdown Saturday, detaining more than 140 people, the interior ministry here said. At least a dozen people, including the US Ambassador to Libya, were killed across the region.

“Last week, it was all tear gas and stones, and people bleeding,” said Nihal Al Hakeem, the owner of a pharmacy directly across the street from the US Embassy in Cairo, referring to the clashes between protestors and police. “But now, everything seems to be okay.”

But even as violent melee in Cairo and other Muslim-majority Arab capitals subsided, the effort to contain the political fall-out from the week-long crisis shifted to diplomatic quarters, where a serious debate over America’s long-term role in a changing Middle East appeared to be taking place.

On Saturday, the US ordered the evacuation of all non-essential personnel from its missions in Tunisia and Sudan, where facilities were either damaged or looted over the weekend. The US Embassy in the Yemeni capital, Sana’a, vandalized by protestors on Friday, announced Sunday it would be closed until the end of the month. In Cairo, where angry protestors stormed the embassy on Tuesday, it had yet to open for normal consular services.

Egypt’s Muslim Brotherhood, which propelled Egyptian President Mohamed Morsi to power, sought to quell US fears that its interests were insecure in an Islamist-led Egypt. Morsi had erred in his initial response to the breach of US Embassy grounds in Cairo, where protestors tore down the US flag and hung a black Islamic one in its place.

First, he condemned the message of the video, which portrays the Muslim Prophet Mohamed as a sex-crazed war-monger. And only after US President Barack Obama told the US-based, Spanish-language television network Telemundo that Egypt was neither an enemy nor an ally, did the Brotherhood reverse course and censure the demonstrators for defacing the mission.

“We are trying to spread the message that this is not typical of the average American citizen,” said Ibrahim Al Iraqi, a member of the Brotherhood’s Freedom and Justice Party in Mansoura, an Egyptian province just outside Cairo. “We must inform and re-educate the people, so they are not distracted by these things produced by foolish individuals,” he said. “And we believe the state must take a role in this.”

Still, analysts chalked up Morsi’s primary response as pandering to the more conservative Salafi Muslims who had called for the protests and whose political parties still pose a threat to the Brotherhood at the polls.

It was a move that underlined Morsi’s growing independence from the White House, but also a comeback of sorts for the radical political Islamists who were sidelined when parliament was dissolved in June.

It will likely continue to color both the domestic political scene and Morsi’s relationship with the US, analysts said.

“As Salafis, we feel he [Morsi] could do more to defend Islam,” said Sameh Abd Al Hamid, a member of the Salafi Al Nour party that had backed the first protest in Cairo on Tuesday. “I don’t think he should officially apologize [to the US].”

Only a tiny minority of Muslims protested the film. But the US indeed remains an unpopular force for propping up authoritarian governments, invading Iraq and Afghanistan, and its unwavering support for Israel.

In a poll released in May by the Pew Research Center, a public opinion group, 79 percent of Egyptians said they hold an unfavorable view of the US.  The majority wanted to see US-Egypt relations scaled down.

Some protestors, many of whom called for their respective governments to sever diplomatic relations with the US, linked the production of the anti-Islam film on American soil to its history of interference in the Muslim world.

“To the US and NATO: leave our lands, and go back to yours behind the seas!” chanted hundreds of protestors at anti-American demonstration in the Jordanian capital, Amman.

“Enough with using the assets of the Muslims!” went other chant.

But while politics took center-stage, at the heart of the matter for some Egyptians was a clear division with US lawmakers over the limits of free speech.

Where Americans see a horrible film that is offensive to almost anyone, but protected under the First Amendment, many Muslim protestors see a blasphemous insult that degrades their most revered religious figure.

And even as the violence waned, the discussions lingered on the streets.

“Freedom of speech is a basic right. But can you come here and say hateful things about my mother?” said 53-year-old Hassan Abdel Hamed, a fruit vendor outside the US Embassy in Cairo. “You know, I want to emigrate to America, and I believe in free speech. But I am a Muslim first.”