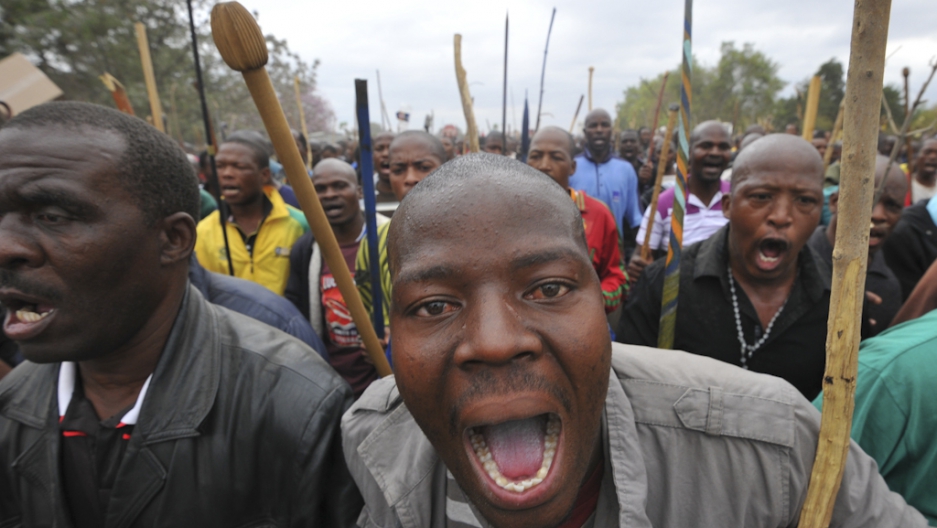 Thousands of striking workers singing and carrying sticks march on a South African mine in Marikana on Sepember 5, 2012, as police were accused of shooting miners in cold blood during a crackdown that killed 34. Armoured police trucks and two police helicopters kept watch as around 3,000 miners arrived at the entrance of a shaft owned by the world's number three platinum producer Lomin where a deadly strike is now in its fourth week.
Credit: ALEXANDER JOE
Share

JOHANNESBURG, South Africa — In a crackdown aimed at quelling the crisis in South Africa’s mining industry, the government Saturday sent in hundreds of police, backed up by soldiers and military vehicles, to raid workers' shacks at the troubled Marikana mine.

For weeks South Africa’s platinum mining belt has been a battleground. Wildcat strikes by workers brandishing machetes, spears, and clubs have halted production at several gold and platinum mines, while upstart politicians have sought to whip up the crowds for political gain.

South Africa’s government, criticized for slowness to act on the mining issue under President Jacob Zuma's leadership, is still struggling to deal with the thorny issue of post-apartheid labor relations. While South Africa’s economy relies heavily on the mining sector, wages remain low and living conditions around the mines are abysmal.

Now, the national police force – itself criticized for acts of brutality – has been tasked with keeping peace around the mines by clamping down on striking workers who see violence as a necessary tactic in their fight for higher wages.

More than 500 police were dispatched for this morning’s raid on workers’ hostels at the Lonmin-owned Marikana platinum mine, where they seized scores of weapons and arrested at least a dozen people.

Police, with the support of an army helicopter, fired tear gas and rubber bullets to disperse hundreds of strikers who had gathered in the area. Military vehicles along with at least 1,000 soldiers from the South African National Defense Force were deployed in the Marikana area to support police.

Justice Minister Jeff Radebe had warned Friday that anyone carrying weapons or taking part in “illegal gatherings” would be "dealt with very swiftly, without any further delay," although he stopped short of declaring a state of emergency.

"Our government will not tolerate these acts any further," Radebe told a press briefing in Pretoria, flanked by other top cabinet ministers and the national police chief.

When police came up against striking miners at Marikana platinum mine last month, the result was horrific: 34 people shot dead by police, many of them in the back, in the deadliest protest since the end of apartheid.

Mines run by Anglo American, Lonmin and Gold Fields in the Rustenburg area, northwest of Johannesburg, are currently shut because of the continuing unrest.

Marikana workers on Friday rejected a pay offer from management, saying it was far below the 12,500 rand salary (about $1,500) they are demanding. Lonmin had proposed a pay rise of about 900 rand a month; miners currently earn between 4,000 and 5,000 rand.

The company has also obtained a court order declaring the strike unprotected, which means it could fire striking workers.

Some miners wanting to return to work have faced intimidation and threats, amid continuing calls for a nation-wide strike at mines. A main target of frustration is the National Union of Mineworkers, accused of having lost touch with grassroots members.

Mining giant Anglo American has suspended operations at its Rustenburg platinum mines to "protect the safety and security of its employees," the company said.

Crispen Chinguno, an academic at Johannesburg’s University of the Witwatersrand who spent the past year researching strike violence at the Rustenburg platinum mines, said strikes during apartheid were characterized by serious violence, and this continues.

“The people in South Africa know that violence has worked before. Sometimes it brings solutions,” Chinguno said. “For the workers, they see it as a strategy – a way of challenging a system that is based on exploitation."

A recent survey found that half of this country’s union members think violence is necessary during a strike.

More than 3,000 workers were polled by a research institute associated with Cosatu, South Africa’s main trade union federation that is in an alliance with the ruling African National Congress party.

One worker surveyed is quoted as saying that “violence during strikes is appropriate, because it is the result of the pain that workers feel.”

South Africa’s police also have a reputation for violence, which makes for a volatile combination.

Last year more than 630 police officers were arrested in Gauteng province (which includes Johannesburg and Pretoria), most of them on charges of fraud and corruption, but also for rape and murder.

More from GlobalPost: South Africa announces crackdown on mine violence

The country's Independent Police Investigative Directorate said this week it was investigating allegations that police in Pretoria had tortured a 28-year-old man to death.

Radebe wouldn’t say police whether will be allowed to use live ammunition in breaking up protests at the mines, but added:  “All those who are involved in illegal activities are going to be dealt with very swiftly.”

“These acts of violence and intimidation clearly undermine our government's efforts of ensuring economic and security stability," Radebe said.

South Africa already has official unemployment of 25 percent, though actually closer to 40 percent, and economic growth is projected at just 2.7 percent for this year.

“We all need to work together as South Africans to stop what is going on, which is going to be extremely damaging to our economy in more ways than we understand at the moment,” Gordhan said.