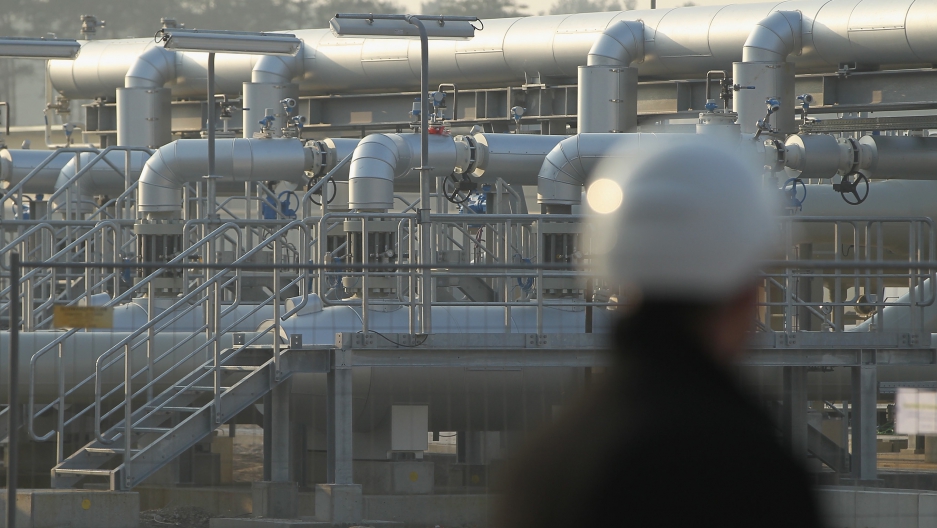 A gas facility in Germany for a pipeline connecting the country to Russia, which provides a third of German supplies. Gazprom has split EU unity toward Moscow by striking lucrative deals with individual countries.
Credit: Sean Gallup
Share

MOSCOW, Russia — It may have taken a long time, but it appears the European Union may finally be standing up to Gazprom.

That prompted a fiery reaction from the Kremlin that threatens a major confrontation over an issue at the heart of Moscow’s economic and political relations with European countries.

The EC probe follows a series of sensational raids on the offices of Gazprom affiliates across Europe in September last year. The investigatory taskforce — which rarely loses cases and recently succeeded imposing sanctions against Microsoft — is now probing allegations that Gazprom prevented countries from diversifying their gas supplies, broke anti-monopoly rules and imposed unfair prices calculated by a formula pegged to the price of oil that’s opposed by some EU countries.

President Vladimir Putin on responded on Tuesday by signing a decree prohibiting “strategic” companies from cooperating with investigations by foreign governments without Kremlin approval, formally elevating handling of the clash to the country’s highest office.

Gazprom denounced the EU for making what it called an attempt to force price concessions and promised to prioritize natural gas exports to the gas-hungry Asia instead.

Analysts said the investigation is a serious threat for Gazprom.

“Not only because of fines,” said Pavel Baev of the Peace Research Institute Oslo. “Fines are fines, a small bother. This probe hits at the very heart of Gazprom’s export philosophy.”

The EU could levy penalties of up to 10 percent of Gazprom’s annual revenue, an amount that could reach 1.5 billion dollars for 2011, according to VTB Capital.

But the probe’s silver bullet is its attack on the overlap of business and politics in Gazprom’s export policy, which has aimed at striking deals with individual countries inside the EU.

The Kremlin has been adept at using gas deals to divide and prevent its 27 members from forging a common policy by courting some countries while cold-shouldering others.

Russia’s largest company, which provides about 10 percent of the country’s economic activity, Gazprom has built a network of pipelines and utilities that stretch across Europe.

Some believe its strategy encouraged German Chancellor Angela Merkel to lead an effort in 2008 to block new EU regulations that would have made it more difficult for Gazprom to buy utilities delivering energy supplies to European consumers.

Russia's position quickly hardened this week. Gazprom spokesman Sergei Kupriyanov on Tuesday slammed as “absurd” allegations that “Gazprom ‘unfairly’ links gas prices to oil and its derivatives,” calling the practice “a traditional pricing mechanism in the gas industry and is applied elsewhere in world gas markets.”

“It’s well known that a number of the EU’s relatively weak economies continue demanding that Gazprom unilaterally cut prices,” Kupriyanov said. “Such statements can be interpreted as nothing other than EC support for cheap gas subsidies for Eastern Europe at the expense of Gazprom. This is an attempt to resolve the economic challenges of the EU, particularly of its new member countries, Eastern Europe, at Russia’s expense.”

But the EU, which depends on Russia for a quarter of its gas, has been emboldened by the development of new sources, including liquefied natural gas and shale gas from the United States, which has lowered global gas prices. It is trying to create a competitive market for gas despite Russia's grip on imports.

Some analysts said the very decision to start the investigation is revealing. “When the EU officially launches a probe, it means they are reasonably certain of the outcome,” Baev said. “It means they have collected evidence and are certain they can bring it to victory.”

Others were more cautious. Jonathan Stern, chairman of the gas research program at the Oxford Institute for Energy Studies, said, "The bottom line is that we need to wait until the proceedings are finalized."

More from GlobalPost: Russian massacre documents kept under wraps by US: report

The EC probe is expected to take between six and eighteen months, Günter Oettinger, the EU’s commissioner for energy, told Interfax on Tuesday.

Analysts predicted Putin’s decree will do little to blunt the investigation of a company in which his inner circle has long called the shots.

The decree formally outs Putin’s administration as the ultimate decision maker for the country’s largest company, although it’s well known the Kremlin has long wielded the gas monopoly as a tool to pressure former Soviet republics, which Russia calls its “near abroad,” to remain within its orbit.

Many of those countries buy more than 90 percent of their gas from Russia.

On Wednesday, Moscow used Gazprom to strike out at an EU energy liberalization program in Eastern Europe by offering Moldova a bold ultimatum: drop its plans to impose the so-called Third Energy Package by 2015 or forfeit the low prices it pays for Russian gas.

But Baev says the Kremlin’s hard-line political stance would probably not work against a challenge by an independent commission that would be better fended off by a team of lawyers.

“Putin is used to having a symbiosis between Gazprom and the Kremlin that gives him additional levers,” he said. “Now it’s clearly a liability. He has to spend political capital defending it not very skillfully and exposing himself.”