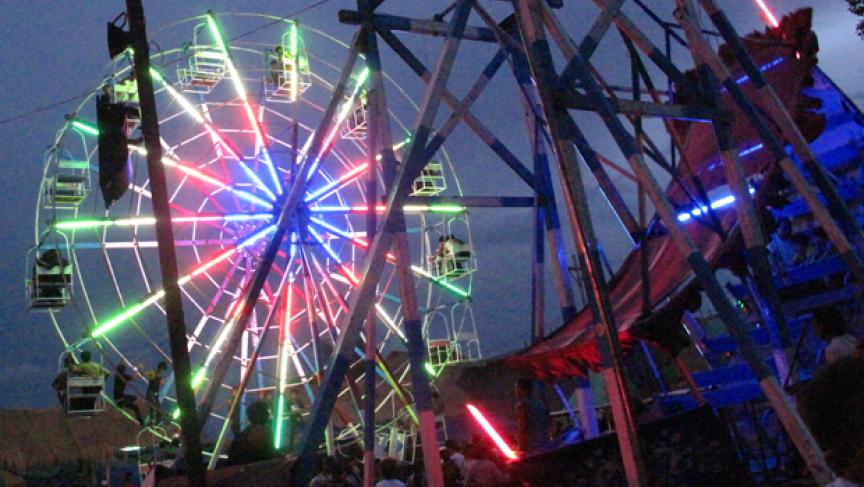 The Taung Byone festival is held for a week every year. (Photo: Becky Palmstrom)

Share
In Myanmar, it's illegal for men to have sex with other men. There are no gay bars or openly gay celebrities. But for one week each year, in a small village called Taung Byone, thousands of gay and transgender people congregate and celebrate freely. It happens at one of Myanmar's largest spirit or "nat" festivals. We take our shoes off to walk across the sun-warmed stone of the main shrine in Taung Byone. The air is thick with the scent of flowers, offerings to the two spirits, or nats at the heart of the festivities. Most people here believe that if they pay enough respect and money to the spirits, they can make contact with them. But they have to go through a spirit medium, or a nat-sayer. A nat-sayer with tapered red nails and flowers in his long hair is wearing a dress. He throws shells onto a pile of bank notes and tells an older man's fortune. Suddenly there's a commotion. A woman moans and screams, seemingly possessed. Another woman who is guarding the shrine rushes over to calm her down. Later the shrine guard tells us this was not an "official" spirit possession. With thousands of spirit mediums in town, there's a bit of a monopoly on who can get possessed here. Only recognized natkadaws, "the wives of the spirits," can have a "real" possession. "If you are being possessed by a female nat, you dress like a female. If you are being a male nat, you dress like a male. You can change instantly," according to Zaw Myo Naung, one of the official nat mediums. He says gay men like him tend to be better at connecting with the spirits, because they have both a male and a female side. This traditional belief helps makes Taung Byone a special place for Myanmar's closeted gay community. "Their freedom and happiness is here," he said, "and that's why it is a place for gay people." Naung's uncle was upset when his nephew became a spirit channeler, because he says they'd never had a gay member of the family before. Later they accepted him, though. It helped that Naung's connection to the spirits bought the family a house and a car. Transgender people find acceptance here too. Tha Ma Shein Linn says she loved Taung Byone right from the start because although she has a man's body, she can dress as a woman here. Taung Byone was the first place she'd seen so many other transgender people — many working as natkadaws. It's one of the few jobs transgender people can get, according to Nay Oo Lwin of Population Services International, an NGO that works with Myanmar's gay community. "They only have three choices to earn a living: to become a natkadaw, a beautician, or a sex worker." Nay Oo Lwin says the festival in Taung Byone doesn't just draw spirit worshipers. It's also a meeting place for gay Burmese. "There is a saying — if you are a gay man in Burma, you must [come] to Taung Byone." At the main shrine, live music blasts out. People of all ages are leaping, pushing and clawing to give money to the natkadaws who dance in the center, decked out in fake eyelashes, sparkling dresses and big hair. For one week, they are the most revered people in the country — connecting the spirit world with humans. And for the gay community of Myanmar, for that one week, there is no judgement.