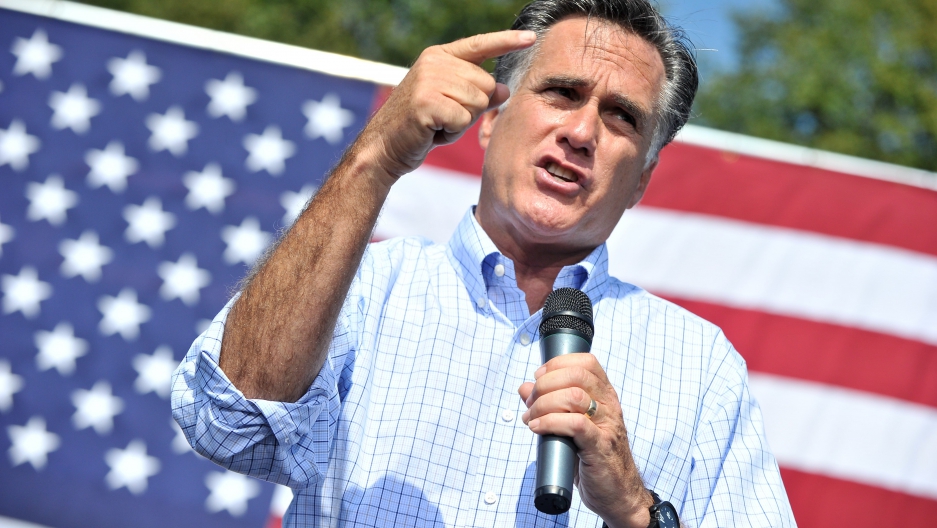 BUZZARDS BAY, Mass. — It was just a few days ago that a top foreign policy adviser for Republican nominee Mitt Romney sought to blunt the sharp attacks leveled on his candidate by the Democrats last week in Charlotte.

"It doesn't surprise me that [the Obama team is] raising foreign policy because it's another distraction from the administration’s terrible economic record,” said Robert O’Brien, speaking to BuzzFeed. “They're going from one shiny object to the next."

But Romney seemed unable to resist engaging the topic on Tuesday evening, when he struck out angrily at the Obama administration for its reaction to the crises in Libya and Egypt.

“It's disgraceful that the Obama administration's first response was not to condemn attacks on our diplomatic missions, but to sympathize with those who waged the attacks,” Romney said in his statement.

You should have stuck to the “economy, stupid.”

This time the shiny object proved to be a hand grenade that just might blow up the entire campaign.

Almost no one has defended Romney’s hasty and inaccurate remarks. Many charge him with politicizing a national tragedy.

The Washington Post editorial board said that Romney’s response was a “discredit” to his campaign, and even his own people were scathing. One former adviser tried to explain Romney’s pique as a reaction to the thrashing he took in Charlotte, but acknowledged that the candidate had “stepped in it.”

The Romney campaign somewhat lamely responded that they had not known at the time of the statement that Ambassador J. Christopher Stevens and three other US diplomatic staff had been killed.

This rang especially hollow since they had scornfully rejected a similar argument from the Cairo Embassy, which said its walls had not been breached when it issued a statement condemning the anti-Muslim film that allegedly triggered the violence.

But what is at stake here is more than just the rookie mistakes of a foreign policy neophyte who, as Obama told CBS, “has a tendency to shoot first, aim later.”

Romney repeatedly accused the president and his administration of weakness, of capitulating to radicals. He used the word “apology” numerous times in his Wednesday press conference, saying, “I think it’s a terrible course for America to stand in apology for our values … An apology for America’s values is never the right course."

Which “values” was America allegedly apologizing for? Obama and his Secretary of State, Hillary Clinton issued denunciations, at times scathing, of an offensive and amateurish film whose provenance is unclear.

More from GlobalPost: Who is Nakoula?

“While the United States rejects efforts to denigrate the religious beliefs of others, we must all unequivocally oppose the kind of senseless violence that took the lives of these public servants,” said the president in the official White House statement on the tragedy.

Clinton went even further on Thursday, saying she personally found the film “disgusting,” although she does go on to explain that, in the United States, people have a right to say what they want.

But a ludicrously idiotic film is not the issue, we are told. We must stand up for freedom of speech, for our First Amendment rights.

That is, of course, so. Hate speech is protected in the United States, although “fighting words” and irresponsible utterances such as shouting “fire” in a crowded theater face some limitations under the law. Anyone who has seen the 13-minute trailer could surely find a reason to censure the film if not to censor it.

Google has done just that. On Friday, the search giant and YouTube owner said it blocked access to the video in Egypt and Libya.

But does Romney’s firm commitment to absolute freedom extend to assaults on values that he holds dear? He has said openly that, as president, he would cut subsidies to the National Endowment for the Arts.

The NEA has been under attack from conservatives for years. Some if its more spectacular installations, such as Andres Serrano’s 1987 photograph of a crucifix dipped in urine, or Robert Mapplethorpe’s homoerotic displays, engendered fierce displays about the limits of artistic freedom.

For more mainstream entertainment, just ask Martin Scorsese about “The Last Temptation of Christ,” a film that so riled right-wing Christians that several theaters refused to screen it.

Romney is now professing to be disturbed by the anti-Islamic film, which, he confesses, he has not seen.

“Well, I haven’t seen the film,” he told ABC’s George Stephanopoulos. “I don’t intend to see it. I you know, I think it’s dispiriting sometimes to see some of the awful things people say. … Of course, we have a First Amendment. And under the First Amendment, people are allowed to do what they feel they want to do. They have the right to do that, but it’s not right to do things that are of the nature of what was done by, apparently this film.”

In other words, Romney repeated just about exactly what Obama and Clinton have been saying.

Romney’s critics have new fuel for their portrayal of a man who cannot be trusted to handle himself in public. He took a painful lashing over his gaffe-prone overseas trip. Now he’s under fire for the Stephanopoulos interview, where he condemned most of the world to poverty by reclassifying the notion of “middle income.”

In “The Real Romney,” by Michael Kranish and Scott Helman, the authors describe how Romney felt that he lost the nomination to John McCain in 2008 because he let himself be drawn into debates about foreign policy, in that case about the war in Iraq. In his next campaign, say the authors, Romney resolved not to abandon what he sees as his strong suit, the economy.

Maybe that’s not such a good idea, either.

In the six short weeks left before the presidential election, there will doubtless be many more distractions for both candidates. Romney’s advisers had better keep him from reaching for any more shiny objects.