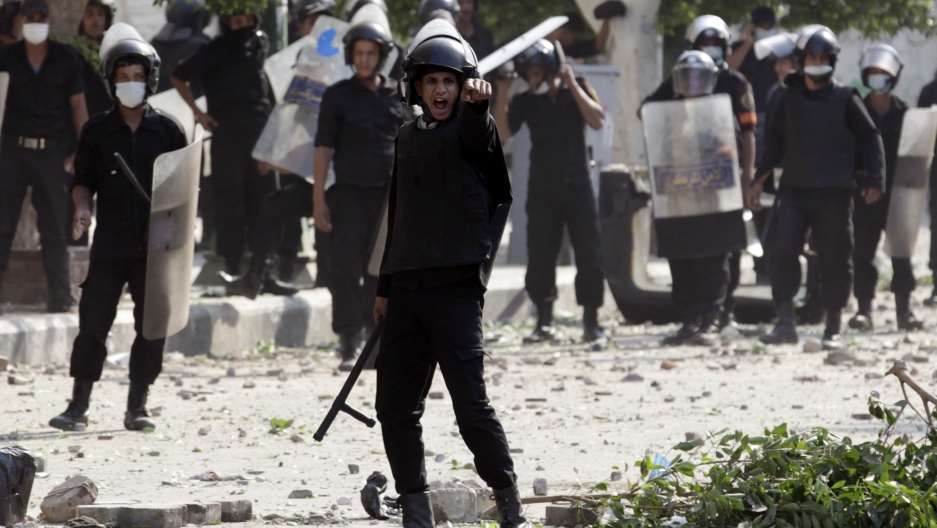 A riot policemen shouts a warning to protesters during clashes along a road which leads to the U.S. embassy, near Tahrir Square, in Cairo, Sept. 13, 2012. (Photo by Mohamed Abd El Ghany/Reuters.)

Protests in Egypt, Yemen and Libya over a film that mocks Islam present major challenges for the administration of President Barack Obama — less than two months before elections here.

All three countries underwent “Arab Spring” protest movements and in Libya, the U.S. played a role in helping Libyans overthrow Col. Moammar Gadhafi. But while most of the attention is focused on Libya, where four Americans died in what is believed to possibly have been an organized terrorist attack, the bigger problem for U.S. foreign policy may come from Egypt.

Egypt is the second-largest recipient of U.S. foreign aid, after Israel, and has been a longtime ally of the United States. Libya, on the other hand, is not that important to American national security, says Helene Cooper, White House correspondent for The New York Times.

"Egypt is Ground Zero for everything that's going on in the Middle East," she said. "In Egypt, the new president, Mohammed Morsi, who is from the Muslim Brotherhood, has been much more reticent (than Libyan leaders) about coming out and condemning the attacks on the U.S. Embassy in Cairo."

He didn't even issue a statement on the matter until some 24 hours after the attack — and it was on Facebook. President Obama in two separate statements lauded Libya for its help but had little more than pointed words for Egypt. That, Cooper says, is worrying.

"The (statement about Egypt), it sounded like President Obama read President Morsi the riot act," Cooper said. "It was very, very cold."

Morsi has also taken a number of other steps that have antagonized the United States, including a crackdown on press freedom and attending a non-aligned nations summit in Iran.

Appearing on Telemundo on Wednesday, Obama went so far as to say he wouldn't consider Egypt an ally — but don't consider them an enemy. It's a dramatic turn-of-events for a country that has been one of America's closest partners in the MIddle East since the Camp David peace accords in the 1970s.

It's especially ironic given Obama's support of the Arab Spring — making an early call for former Egyptian President Hosni Mubarak to step down and making one of his first major speeches as president from Cairo.

But Cooper wouldn't go so far as to say this is an indication that American policy on the Arab world isn't working.

"His speech in Cairo in June 2009 was not about Democracy, was not about protests. It was much more about respect and human dignity and mutual respect," Cooper said.

But already there were signs Friday that Obama's tough talk may have had the desired effect. Cooper reported in The New York Times that Morsi and other Egyptian leaders had erred in their initial response.

They vowed to take more stern action to protect the American diplomatic presence.