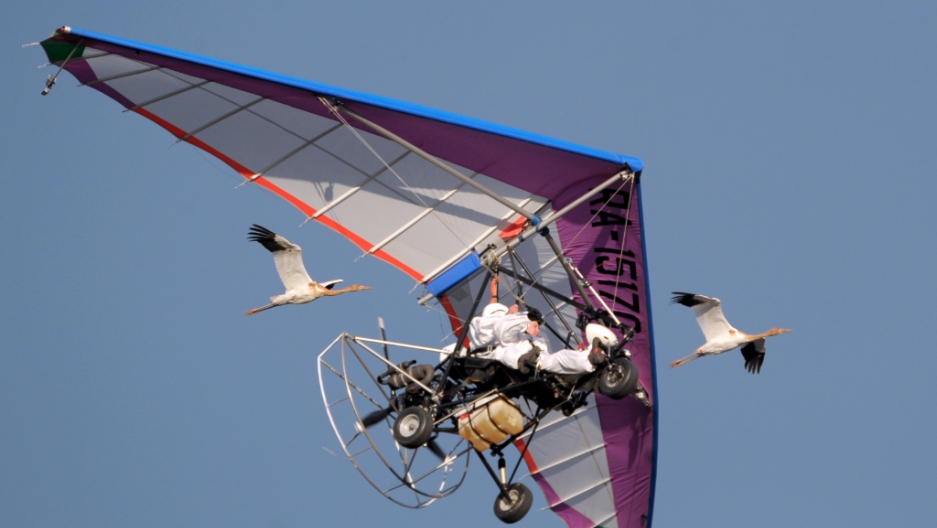 Russian President Vladimir Putin pilots a motorized hang glider while flying with cranes as he takes part in a scientific experiment as part of the 'Flight of Hope', which aims to preserve a rare species of cranes, on September 5, 2012. At the helm of a motorized hang glider that the birds have taken as their leader, Putin made three flights - the first to get familiar with the process, and two others with the birds.
Credit: Alexey Druzhinin
Share

Russian President Vladimir Putin of tiger-taming fame has admitted that a few of his legendary performances with wild animals have in fact been carefully orchestrated media appearances, according to a Russian interview cited by Reuters.

More from GlobalPost: DNC accidentally shows Russian warships during tribute to US troops

But being Putin, a man whose PR skills have endeared him to the Russian public despite his heavy-handed governance, the president quickly turned what could have been an embarassing admission into a self-described public mission.

Take his fearless exploratory dive to the bottom of the Black Sea last year, for example. "Why did I dive?" Putin asked journalist Masha Gessen, according to the interview published in Russia's Bolshoi Gorod quoted by Reuters. "Not to show my gills off, but to make sure people learn history. Of course it was a set up."

This is no shocker to the president's critics, who have long been skeptical of such footage, but it is the first time Putin has publicly acknowledged a little help with some of his famously Herculean TV acts.

Putin made the comments during a meeting he requested with Kremlin critic Gessen after she was fired from her travel magazine editing job for refusing to send journalists to report on the president's latest high-profile appearance in a airborne contraption alongside a flock of cranes. (See accompanying photo.)

"Of course, there are excesses," he admitted to Gesson. "But I thought up these tigers myself," he said, referring to footage showing him tranquilizing an attacking tiger that environmentalists suspected had actually came from a local zoo. Well, ravaging wild tiger or domesticated cat, no matter: "Twenty other countries where tigers live, also started taking care of them," Putin said in his defense.

"The leopards were also my idea," he went on. "Yes, I know, they were caught before, but the most important thing is to draw public attention to the problem." Putin was shown caring for a wounded snow leopard in a television appearance last year, according to Reuters.

The authoritarian Russian leader is not known for admitting much of anything, much less to an opposition journalist, but Reuters confirmed the rare interview with his spokesperson in Sochi today.

Putin also allegedly tried to get Gesson re-hired at the travel magazine but she refused, said Reuters.