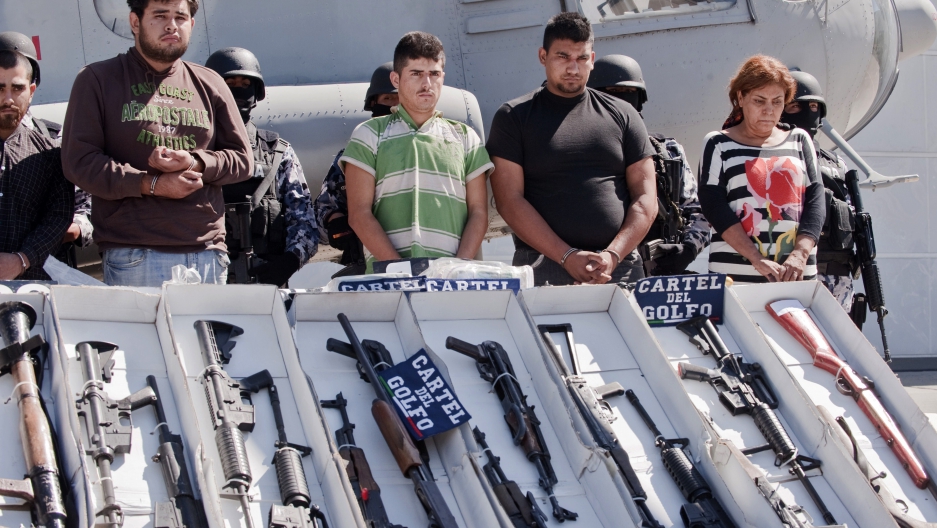 Members of the Gulf Cartel detained in Tamaulipas State are shown to the press before a hangar of the Mexican Navy in Mexico City on September 29, 2010.
Credit: ALFREDO ESTRELLA
Share

Mexican marines have captured a man they identified as the leader of the Gulf Cartel, Jorge Eduardo Costilla Sanchez, without giving further details.

The Navy said it would give more details Thursday.

El Coss, 41, is one of Mexico's most-wanted men. He is also wanted in the US for drug trafficking, money laundering and threatening law enforcement officials.

The State Department had offered a $5 million reward for information leading to his arrest.

The Gulf Cartel is one of Mexico’s largest drug trafficking organizations, and Sanchez's capture would mark a major victory in the crackdown on organized crime ordered by President Felipe Calderon, Reuters wrote.

However it could leave a power vacuum in a region contested by rival gangs and, according to the AP, the scene of some of the most horrific violence in the drug wars.

The Gulf cartel has been fighting over prime trafficking routes into the US with the Zetas drug gang, according to the BBC.

The two split in early 2010 and began a bloody turf war.

The capture, if verified, would also boost the image of the marines, damaged after they erroneously claimed in June that they had captured the son of Mexico's top fugitive drug lord.

Rather than nabbing the son of Joaquin "El Chapo" Guzman, they detained Felix Beltran Leon, 23, whose family said he worked with his mother-in-law at a used car dealership to provide for his toddler.