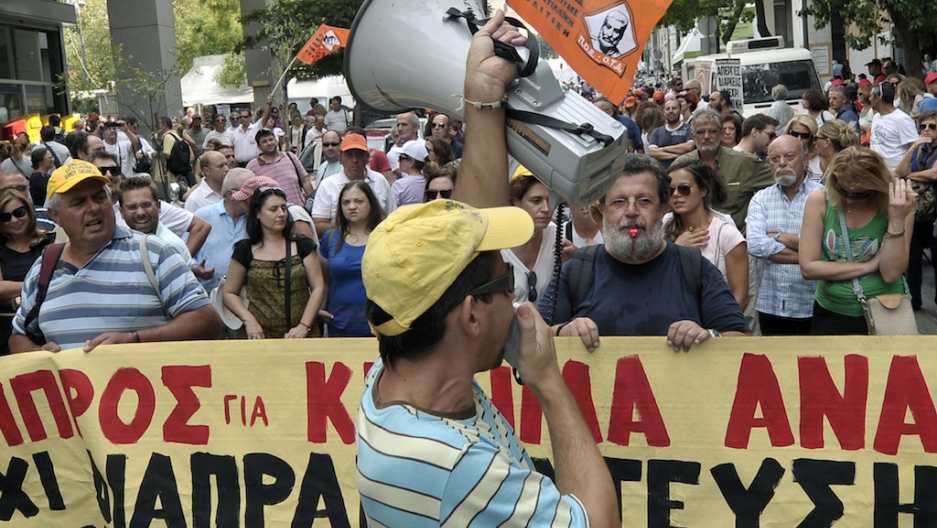 Municipality workers protest at the Finance ministry in Athens on September 12, 2012. Anti-austerity protests have clogged Athens as the government struggles to finalize additional cutbacks with its creditors. Meanwhile, labor unions declared that a general strike would take place later in the month.
Credit: LOUISA GOULIAMAKI
Share

A group of Greece's largest labor unions announced yesterday that a 24-hour general strike will take place on Sept. 26 to protest further austerity cuts in the debt-ridden country where austerity has not worked to stop a continuing recession, the Associated Press reports.

The General Confederation of Greek Labor, a group the represents nearly 150 labor unions and organizations announced today that they would be striking in protest of further budget packages, which will include pension and wage cuts at the behest of international credit lenders.

The recession is already crippling the country, and repeated implementation of austerity measures has done nothing to curb the economic free-fall. Despite harsh cuts, according to the AP, "government figures released Thursday reveal unemployment in Greece has risen further to 23.6 percent in the second quarter of 2012 — up from 16.3 percent the previous year" and creditors are demanding the country gut another €11.5 billion ($14.8 billion) over the next two years.

More from GlobalPost: Economic crisis resurrects left-right battles in the streets of Athens

Workers have been repeatedly striking in Greece since 2010, but the Sept. 26 strike will be first one since a June vote kept the country in the Eurozone and elected a conservative government that promised to stabilize the country economically through collaboration with foreign lenders.

However, labor leaders and leaders of the various political parties are all in disagreement with each other on how to best handle the triumvirate that has control of the country's finances: the European Union, the European Central Bank and the International Monetary Fund, which are collectively known as "the troika."

The AP reports that two minority parties refuse to make cuts to the minimum wage or support any more public sector lay-offs, and that the government is seeking more time to adhere to the troika's demands for cuts, saying more austerity would be "counterproductive if forced too swiftly on the country's weakened economy."

"One thing that has not been made sufficiently clear — and it would be good if the troika understands this — is that labor costs in Greece are already very low," government spokesman Simos Kedikoglou told a television news station, according to AP. "This is a complex package ... Everything is up for negotiation."

Other cuts that have been proposed include medical benefits for blind and disabled people. A crowd of nearly 200 people, including the returning Greek paralympic team, protested in front of the Finance Ministry in Athens on Thursday.

For more of GlobalPost's coverage of labor, check out our Special Report "Worked Over: The Global Decline in Labor Rights."