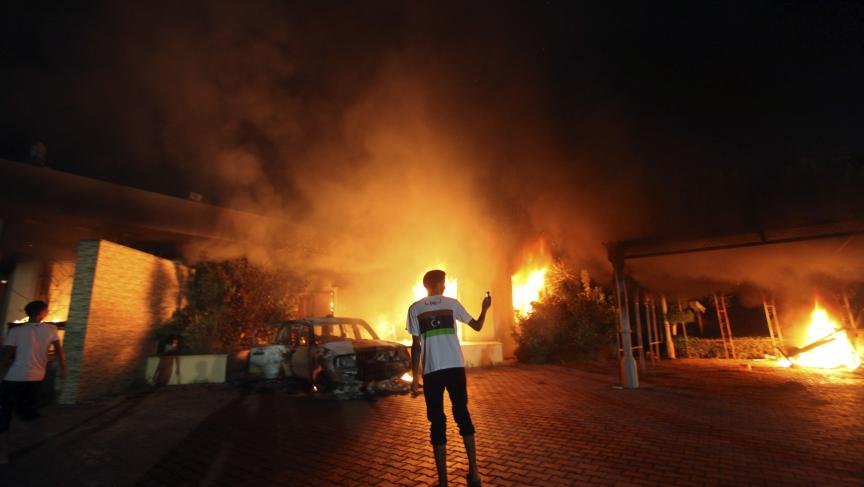 The U.S. Consulate in Benghazi is seen in flames on September 11, 2012, during a protest by an armed group said to have been protesting a film being produced in the United States. (Photo by Esam Al-Fetori/Reuters.)

Chris Stevens, the U.S. Ambassador to Libya, was killed Tuesday after protesters stormed and burned the American consulate in Bengazi, Libya.

Three other American diplomatic workers were also killed in the attacks, which are believed to have been prompted by a video, produced in the United States, deemed insulting to Muslims. Secretary of State Hillary Clinton identified one of the three as Sean Smith, a foreign service information management officer. The names of the other two were being withheld, pending notification of family members.

The attack, which followed one on the U.S. Embassy in Cairo earlier in the day, came on the 11th anniversary of the Sept. 11 terrorist attacks.

According to The New York Times, Stevens death is the first by a U.S. ambassador abroad in more than three decades — the last being Adolph Dubs, who was killed in 1979 in Afghanistan

"I had the privilege of swearing in Chris for his post in Libya only a few months ago. He spoke eloquently about his passion for service, for diplomacy and for the Libyan people," Secretary of State Hillary Clinton said in a statement. "This assignment was only the latest in his more than two decades of dedication to advancing closer ties with the people of the Middle East and North Africa which began as a Peace Corps Volunteer in Morocco."

President Barack Obama on Wednesday morning ordered increased security at all diplomatic posts abroad, including the deployment of additional U.S. Marines to the diplomatic outposts in Libya.

It is not yet known precisely how Stevens and his colleagues died, but various reports have indicated smoke inhalation from being in the consulate as it burned. Another report said he was shot while officials tried to transport him to safety. An Italian news website obtained and posted pictures of what is believed to be the ambassador being dragged away by crowds, with smoke stains on his eyes and mouth.

Wednesday, Libyan politicians lined up to blast the attackers who assaulted the embassy and apologized to the United States.

"We owe an apology to the US government, it's people and in fact to the hold world," said Mohamed Yousef el-Magariaf, president of the Libyan General National Congress in a speech carried on Al-Jazeera. "Libyans excited the world with our revolution. We refuse, refuse, to let the image and hard work of that to be ruined.''