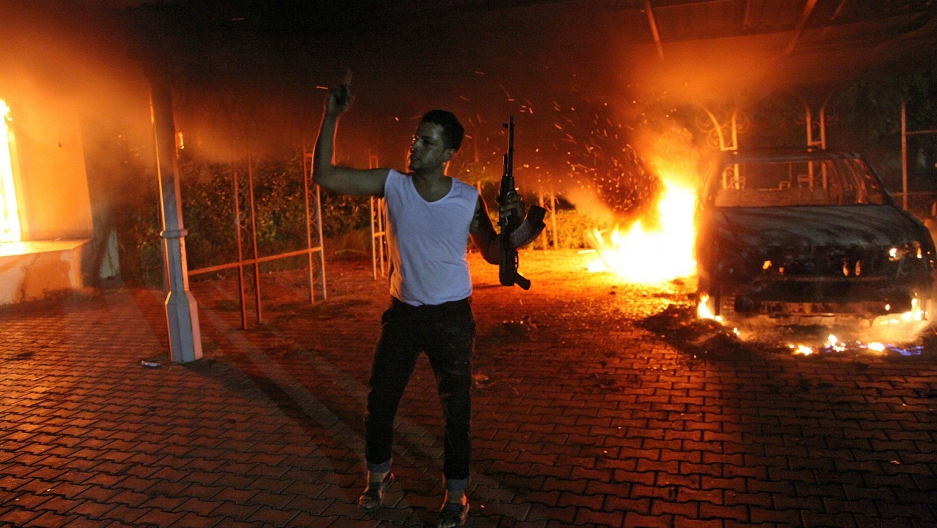 An armed man waves his rifle after buildings and cars were set on fire inside the US Consulate compound in Benghazi late on Sept. 11.
Credit: STR
Share

LONDON, UK — The murder of four American officials in an attack yesterday on the US consulate in Benghazi raises, once again, the old question of, what are the limits to free speech. Did the film that apparently provoked the attack exceed those limits?

I have seen an excerpt from the film insulting the Prophet on the internet and it is outrageous, despicable, and clearly intended to offend Muslims everywhere.

If the protection of free speech guaranteed by the First Amendment does not extend to someone foolishly shouting “fire!” in a crowded theater, what about a film that in all likelihood, will provoke riot and mayhem? The maker of the film knew full well what he was doing. It was the equivalent of shouting the “N” word in a tense black ghetto.

What responsibility does YouTube bear? It asserts it was following its own impartial rules in allowing the posting. Should it have banned it on the grounds that the harm it would cause outweighs any other considerations. Perhaps even on the grounds of bad taste!

These are not easy questions to answer, but the ubiquity of the Internet and the speed with which it disseminates information make them more urgent now than ever before.

Before we in the Judeo-Christian and atheist West stand on our First Amendment soap boxes, how about applying a little common sense?

There is also the question of even-handedness. Some Christians feel, as reported in the words of a March 14th article by Timothy Garton Ash in the British newspaper The Guardian, there is “One rule for Jesus, another for Mohammad”. Ash was writing about the London production of “Jerry Springer: the Opera”, the musical comedy that depicts Jesus as a spoiled brat in diapers.

Conservative Christians picketed the show (although I doubt that any actually saw it – it was more of a spoof of the Jerry Springer Show than an attack on Christianity.)

But even that great British institution, the BBC, clearly uses a double standard. Mark Thompson, the BBC director general who will soon lead the New York Times, admitted as much when it was recently put to him that the BBC would not dream of broadcasting something comparably satirical (as the Jerry Springer opera) about Mohammad.

Thompson replied: “I think essentially the answer to that question is yes.” And he candidly noted that the threat of assassination by Muslim militants is the obvious reason for the asymmetry with which broadcasters treat Islam and other beliefs.

Which prompted this slyly satirical headline in the British weekly Spectator: “Should Christians Kill Mark Thompson?”

From the Iranian fatwa urging the assassination of Salman Rushdie for a novel that was deemed critical of Islam, to the attacks provoked by the Danish newspaper cartoons depicting the Prophet as a terrorist, there have been plenty of examples of what happens when Muslim fundamentalists/extremists/activists (choose your own adjective) are offended by the media. The latest outrage, in Benghazi, will not be the last.

It may be futile to try to devise regulations to break this terrible chain of cause and effect. The digital world is too diffuse, too omnipresent, to be effectively muzzled. Censorship per se is not the answer.

But a little common sense, perhaps a bit of restraint and even occasionally a smidgeon of self-censorship by the Western media would not be out of place. Where would self-promoting pastor Terry Jones of Dove World Outreach Center in Gainsville, Florida, be today if he had not been given the oxygen of free publicity by the local and national media when he announced his plan in 2010 to burn the Koran?

He would be a nobody, as he so richly deserves.