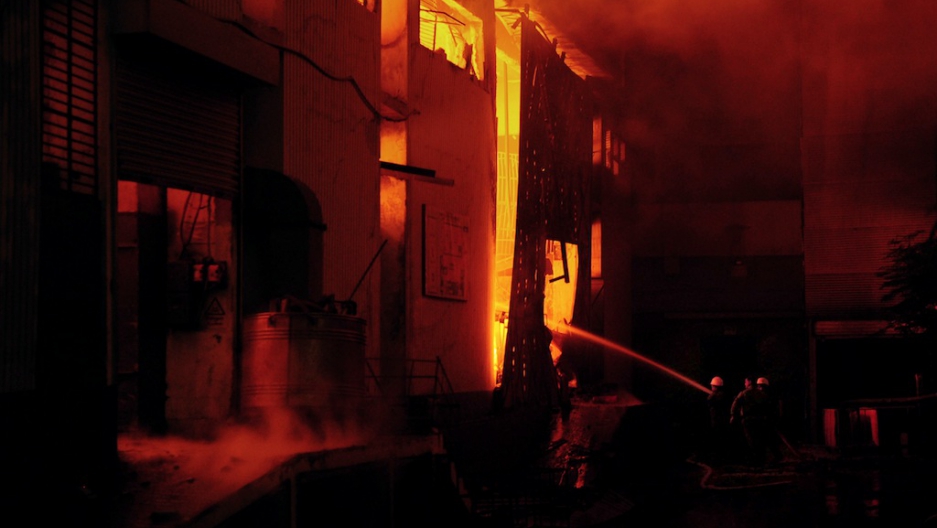 Pakistani firefighters extinguish a fire that erupted in a garment factory in Karachi on September 11, 2012.
Credit: Asif Hassan
Share

KARACHI, Pakistan— Over 300 people have died in Pakistan as a result of two fires, one in Karachi and the other in Lahore, raising pertinent questions about the country's ability to handle industrial safety.

In Lahore, the fire started when a generator, located at the entrance of the building, erupted in flames at a shoe factory on Tuesday evening, killing 25 people, according to Reuters. The New York Times reported that the shoe factory was set up illegally and looked like a residential bungalow from the outside, an easy feat since officials often fail to enforce building laws and maintenance checks.

In Karachi, at least 289 people died after a fire in a garment factory broke out on Tuesday evening. The cause of the fire is still unknown, and officials are attempting to locate the owners of the factory, who have fled following the incident.

According to local media, government officials and rescue workers are still on site, attempting to retrieve bodies from the factory building. They expect the death toll to rise, as the building, which has sustained structural damage, can collapse at any time. Most of the dead were young men and women.

“There is so much heat that we cannot even enter the building and [are] just hosing down from the outside,” said Chief Fire Officer Ehtishamuddin Siddiqui to Express News on Tuesday evening. “The fire needs to be extinguished from above and we have called the Pakistan Air Force for help.” However, the Pakistan Air Force denied being contacted, adding to complaints from onlookers who believed that officials weren't responsive enough.  The Sindh Rangers, a paramilitary force often employed to quell civillian violence, entered the scene soon afterwards.   Witnesses claimed that the fire was still blazing on Wednesday morning.

The New York Times reported that close to 1,500 people worked in the factory, located on the fringes of Karachi, Pakistan's financial capital. The building only had one exit as other doors had been locked shut to prevent employees from leaving. Windows were blocked by metal grills.

“We found dozens of people dead in a large room of the factory’s basement. It was totally burnt and parts of it were smouldering, which we put out before shifting the bodies to hospitals,” said Karachi Fire Chief Ehtesham Salim to Dawn News. According to reports in local media, at least 65 other workers had suffered broken bones after jumping out of windows to escape the fire.

A minister in Sindh has ordered an inspection of all industrial plants and factories in the province as the fire has raised questions about the government's ability to enforce safety laws. According to the Wall Street Journal, many factories in Pakistan are set up illegally; owners simply pay officials off to look the other way.

GlobalPost correspondent Suzanna Koster addressed the working conditions of many factories in Pakistan, who are facing severe electricity shortages due to an energy crisis in the country: