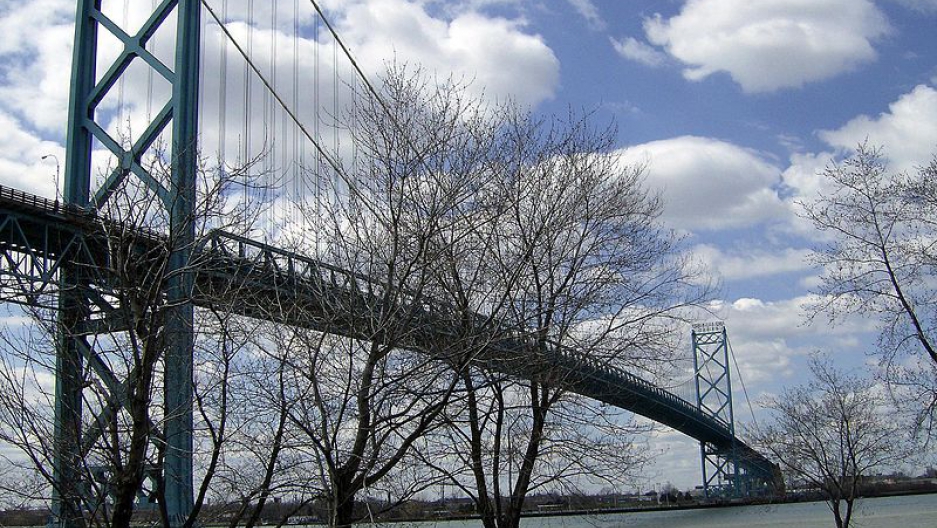 Thousands of people move back and forth between Canada and the United States every day, across the Ambassador Bridge. (Photo by Mikerussell via Wikimedia Commons.)

Latino and Islamic communities who live along the border between Canada and the United States are experiencing an increase in instances of racial profiling by U.S. Customs and Border Patrol officers and other federal agents, a report released earlier this year revealed.

In response, the Council on American-Islamic Relations has filed a lawsuit again the FBI and the border patrol, alleging  religious profiling and mistreatment of Muslims at the border. Some Muslim Americans have been questioned about their faith when crossing the border, CAIR says.

"There is no empirical data to back up that the way someone prays, or how many times a day they're praying, has any connection or correlation to criminal activity or to extremism," said Dawud Walid, the executive director of CAIR-Michigan. "As a matter of fact, there's some data that has come out from the University of North Carolina in relationship to investigating potential extremism or terrorism. The more devout a Muslim is, the more prayerful they are, the less likely they are to be involved in any type of extremism."

Meanwhile, immigrant advocacy groups and eleven members of Congress have called for an independent investigation into reports of alleged abuse and religious and racial profiling along the border.

Martina Guzman, a reporter with WDET in Detroit, said some Muslims have even been detained — not just questioned — about their religious beliefs and practices.

"They're being held for what (CAIR) says are extraordinary amounts of time," she said. "And being asked questions like 'What mosque do you go to?' and 'How many times a day do you pray?' 'Who is your imam?' They say this is blatant religious profiling."

So far, neither the FBI nor customs officials has issued any comment on the lawsuit because many of the cases are still under investigation.

While the Islamic communities have gone so far as to file a lawsuit, Latinos also say they're facing problems coming across the border. Detroit has a large Mexican-American population that lives where the Ambassador Bridge brings people from Canada into the United States, Guzman said.

Ruben Torres, a Mexican-American in Detroit, was coming home from work in 2011 when he too was stopped by immigration officials.

"They accused him of being a human trafficker, of bringing people from the United States into Canada," Guzman said.

Torres, who was born in the United States and works for the Detroit school district, was threatened with being "sent back" to Mexico — a place he's not even from.

Immigrations and Customs agents are also accused of violating their own agency policies and conducting raids at schools around Detroit.