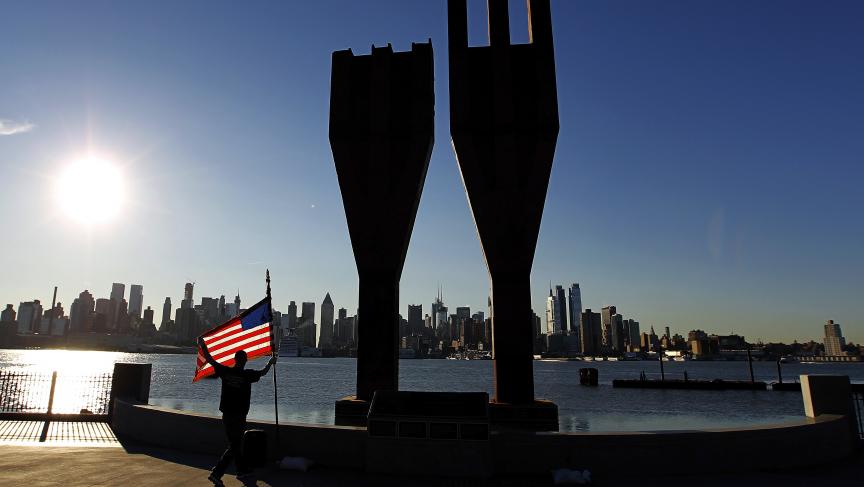 Jeremy Hamilton places a U.S. flag next to a memorial bearing two pieces of steel from the World Trade Center in Weehawken, N.J., across from the skyline of New York, Sept. 11, 2012. Thousands will gather in New York, Washington and Pennsylvania to mark t

Across the Northeast United States and all across the nation, people gathered Tuesday to mark the 11th anniversary of the terrorists attacks of Sept. 11, 2001.

About 3,000 people died in the attacks, which took down both towers of the World Trade Center in New York City, as well as a separate attack on the Pentagon in Washington. A fourth plane crashed in a field in Pennsylvania after passengers retook control of the planed and thwarted the terrorists' attempt to crash it into a government building in Washington, D.C.

At all three sites Tuesday, memorial services were held. In New York City, family members of the victims read out a list of the dead, pausing for a moment to pay special tribute to their particular lost loved one — bothers, sisters, aunts, uncles and fiancees. According to the New York Times, N.Y. Governor Andrew Cuomo, N.J. Governor Chris Christie, New York Mayor Mike Bloomberg and former Mayor Rudolph Giuliani all attended the service, though none of them spoke.

In Washington, President Barack Obama led a moment of silence at 8:46 a.m. ET, the moment 11 years go when American Airlines Flight 11 crashed into the World Trade Center. Obama was scheduled to visit a memorial at the Pentagon later in the day.

And in Shanksville, Pa., where United Flight 93 crashed, Vice President Joe Biden spoke at a memorial service as well.

According to the Washington Post, a group of about two dozen firefighters gathered at O'Hare airport in Chicago, where Presidential candidate Mitt Romney was expected a short time later, to observe a moment of silence as well. The Post noted that both the Obama and Romney campaigns pulled their negative ads from the airwaves on Tuesday, in deference to the somber occasion.