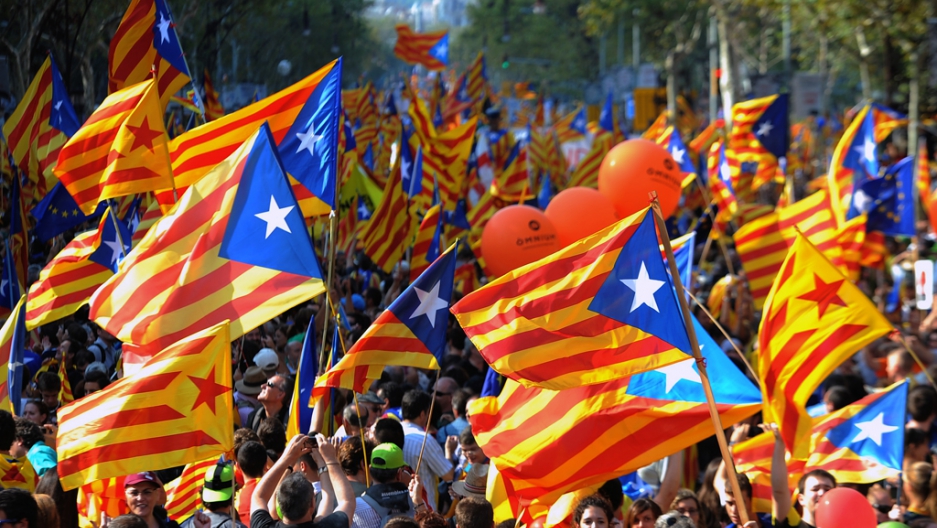 Supporters of independence for Catalonia demonstrate on September 11, 2012 in Barcelona to mark the Spanish region's official day, amid growing protests over Spain's financial crisis which has driven it to seek aid from the central government. Catalonia's leader warned of a "freedom" bid for the region as tens of thousands of people poured into Barcelona demanding a split from Spain and control of their own economy.
Credit: LLUIS GENE
Share

The annual independence rally in Catalonia attracted nearly 1.5 million people in Barcelona on Tuesday, according to the BBC.

The BBC reported that this year's march was one of the largest ever, as people protested against Spain's tax laws.

Reuters noted that the economic crisis plaguing Spain has fuelled separatism and deepened the fractures between Spain's northeast and the central government. Catalans complained that they pay more in taxes than they received from Madrid, and demanded more fiscal autonomy.

"Catalonia produces sufficient resources to live better than we live," said Catalan President Artur Mas, according to Reuters. "There is no more urgent battle or challenge than fiscal sovereignty, and now more than ever."

September 11, also known as National Day or Diada, marks the defeat of Catalan forces on September 11, 1714, after a 13-month siege against King Philip V of Spain, Reuters noted.

The Guardian noted that this year's turnout was so big that the planned route was already filled with demonstrators by the time the march began, "in what marked a watershed for the hitherto marginal independence movement."

More on GlobalPost: Moody's warns US of credit rating downgrade in 2013

Polls published on Tuesday show that 46.4 percent support independence for Catalonia, twice as many as in 2008, when the financial crisis began, the Guardian noted.

"There are 1.5 million people and everything has gone peacefully," a police spokesman said, according to Agence France Presse. Nearly 1,000 buses were used to transport protesters from across the region.

Last month, the Catalan region asked the central government for a 5 billion euro ($6.4 billion) bailout, equivalent, it said, to what it was owed in overpaid taxes, according to the BBC. Catalonia has to take out 13 billion euros in loans to refinance maturing debt.

Mas and Spain's Prime Minister Mariano Rajoy are set to meet on September 20.