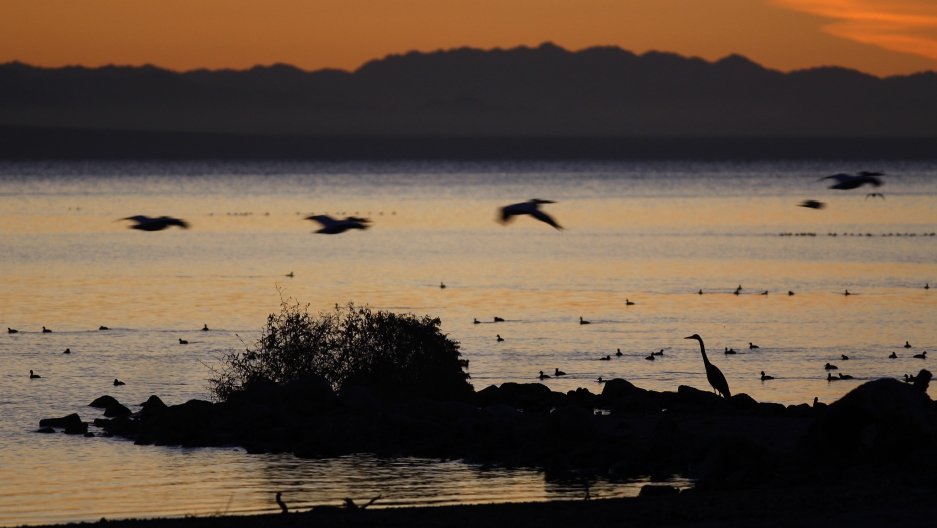 Pelicans fly over a great blue heron on the shore of the Salton Sea, the biggest lake in California, on March 21, 2012.
Credit: David McNew
Share

The Salton Sea has been identified as a possible source of the sulfurous stench spreading across Southern California.

The South Coast Air Quality Management District has been flooded with 200 complaints since midnight from across much of the district's 10,000 square miles, according to the Los Angeles Times.

"We really don’t know whether it’s the Salton Sea or not," said Andy Schlange. "The best answer I can give you is that we’re looking into it."

The state's biggest lake, 150 miles southeast of Los Angeles, has been plagued by increasing salinity and recently experienced a fish die-off, according to the Associated Press.

"Fish kill" in the lake — created in 1905 from floodwaters from the Colorado River — occurs when fish populations explode, depleting oxygen.

The "Salton Sea odor" is occasionally noticed in Palm Springs, about 35 miles away.

According to KABC, Barry Wallerstein, Air Quality Management District executive officer, said late Monday that there was "not yet any definitive evidence to pinpoint the Salton Sea or any other source."

However, Julie Hutchinson, a spokeswoman for the California Department of Forestry and Fire Protection, told the Times: "I'm 99.9 percent sure it's the Salton Sea. It's just a nasty, funky smell from the Salton Sea. … We've had it before.''

"The problem that you get is, last night we had a major wind storm out here and the Salton Sea is very shallow," Schlange reportedly said.

"The wind can stir the Salton Sea up and it brings up gases off the bottom of the sea."

More from GlobalPost: Salton Sea: Drying up for good? (PHOTOS)