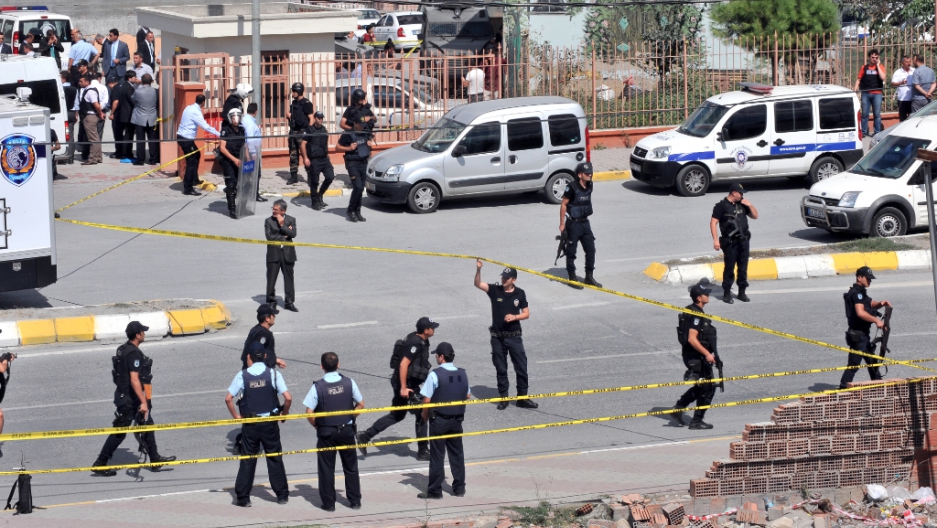 Turkish policemen stand guard in front of the Sultangazi district police station following an attack on September 11, 2012, in Istanbul. At least one police officer died and five people were severely wounded on Tuesday in a suicide bombing that targeted a police station in central Istanbul, Turkish media reported. The attacker came running towards the police station in the central Sultangazi neighbourhood and blew himself up at the entrance, partially caving in the front door and the ceiling, said witnesses. The rubble crushed several people, including police officers, inside the building. The wounded were taken to nearby hospitals and the toll was likely to rise, said an AFP photographer at the scene.
Credit: Bulent Kilic
Share

A suicide bomber attacked a police station in Istanbul today, killing one officer standing nearby, Turkish police officials said, according to Reuters.

More from GlobalPost: Turkey puts 44 journalists on trial for terrorism

At least five people were gravely injured in the attack, which took place in the Sultangazi neighborhood of the capital city, Agence-France Press cited local media as saying.

Istanbul police chief Huseyin Capkin told journalists the attacker "threw a grenade, then blew himself up at the entrance of the police station," Reuters said.

The Associated Press cited Capkin as saying the bomber was 25 years old.

No group has claimed responsibility.

Such attacks are relatively rare in Turkey. AFP said the last suicide bombing seen in the country took place in Kayseri in May and was claimed by the banned Kurdistan Workers Party, with whom Turkey has been fighting a deadly guerilla war for decades.

However, violence between the two groups has escalated in recent months, according to AP.