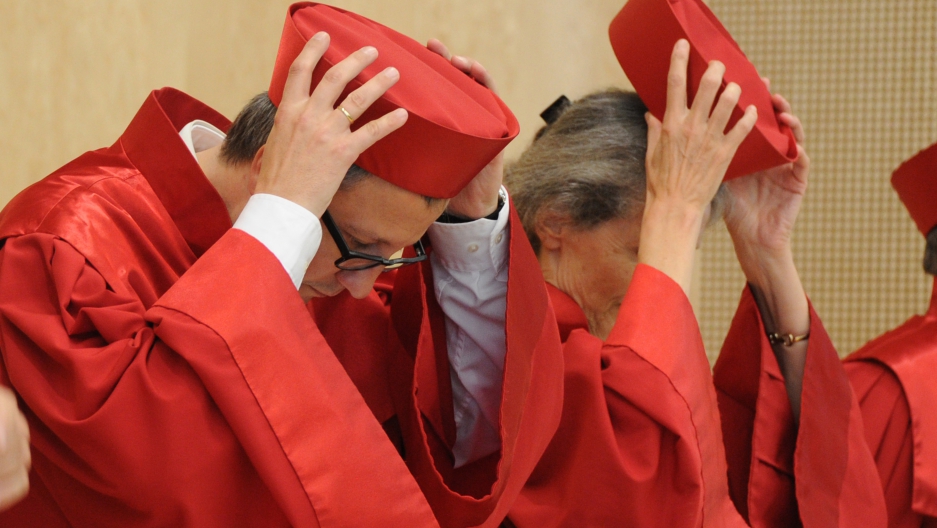 Court members are expected to attach conditions for Germany's participation in the bailout fund even if it approves the measure.
Credit: Uli Deck
Share

BERLIN, Germany — As euro zone officials struggle to find a way out of the debt crisis, the fate of European Union unity on top of its common currency may come down to a decision by this country’s highest court.

The constitutional court’s eight red-robed judges are set to rule on Wednesday on a cornerstone of the effort to save the euro, the plan for a $630 billion permanent bailout fund called the European Stability Mechanism, or ESM.

Although most analysts predict the court will give the rescue fund a green light, a negative ruling could provoke panic on the markets and ultimately force the euro zone’s break up.

The permanent firewall was planned to come into force in July to take over from the temporary $560 billion European Financial Stability Facility (EFSF), which has helped keep Ireland, Portugal and Greece afloat with bailouts since 2010. It is set to expire within a year.

However, Germany’s constitutional court shocked EU countries, then plunged them into limbo by announcing it would require two months to consider a number of constitutional complaints against the ESM.

Berlin would provide the fund with $240 billion, a role that’s upset many German voters angry over what they see as having to pay for the failures of more profligate countries.

Complaints have come from a group representing 37,000 citizens, euro-skeptic economists, left-wing politicians and members of Chancellor Merkel’s own coalition who have all requested a temporary injunction that would block their country from signing up for the fund.

Based in the university city of Karlsruhe in the country’s southwest, the court will make a preliminary ruling on the objections this week as well as on complaints about the fiscal compact, a new set of rules that impose debt limits and strict deficit rules on euro zone members.

Those who oppose the ESM say it contravenes a “no bailout” clause in the EU treaty that stipulates the union is not liable for member countries’ debts. They say agreeing to the ESM would undermine Germany’s sovereignty over its own budgets and leave the country exposed to potentially unlimited financial liability for any risks the fund takes on.

Although analysts predict the constitutional court will almost certainly not block the ESM, they say the judges will probably set conditions for Germany to join. They may cap Berlin’s contributions or demand parliamentary consultations before any moves toward more European integration.

Some believe the court will recommend Germany hold a referendum over rewriting the country’s constitution, known as the basic law.

Highly respected among Germans, the court has often been a thorn in governments’ sides. It has insisted on the Bundestag’s rights of approval in previous rulings on the Lisbon Treaty, the Greek bailout fund and the EFSF.

The stakes are even higher this time.

Chancellor Angela Merkel has said it’s “of the utmost importance” that the court approves the ESM. The fund’s future chief Klaus Regling, who currently heads the EFSF, indicated just how important by telling the magazine Der Speigel that “without Germany, the ESM is pointless.”

Last week, European Central Bank President Maro Draghi buoyed markets and new hopes for the euro by pledging to buy government bonds in unlimited numbers to keep down borrowing costs for struggling countries. However the plan depends on funds from the ESM, which would help administer austerity measures Draghi said would be part of the strict conditions on which the ECB would intervene.

It remains to be seen whether that decision will mark a turning point by providing euro zone governments time to undertake measures that would end the euro crisis.

The European Commission is set to announce a plan for a so-called banking union the same day of the German court ruling. On Friday, the Eurogroup of euro zone finance ministers will meet to discuss ways to help Spain and Italy reduce their debt burdens. Analysts predict intense pressure on Madrid to apply for some kind of rescue deal.

However, Wednesday's ruling will come amid an increasingly euro-skeptic mood among Germans. Last week’s ECB decision provoked howls of protest and dire warnings about the threat of inflation even in euro-friendly media.

The constitutional court dismissed a last-minute challenge from a conservative MP in Merkel's coalition to delay its ruling for another day. Peter Gauweiler, from the Barvarian Christian Social Union, wanted the court to take the ECB's latest decision into account.

Merkel, who faces a re-election bid next year, must be keenly aware of just how deeply unpopular the bailouts and ECB intervention are among her electorate.

A poll published on Friday showed 54 percent of Germans believe the court should block the ESM.

Whatever decision emerges from Karlsruhe on Wednesday, the difficult balancing act Merkel faces between placating the German public and preventing the euro zone from collapsing is unlikely to ease.