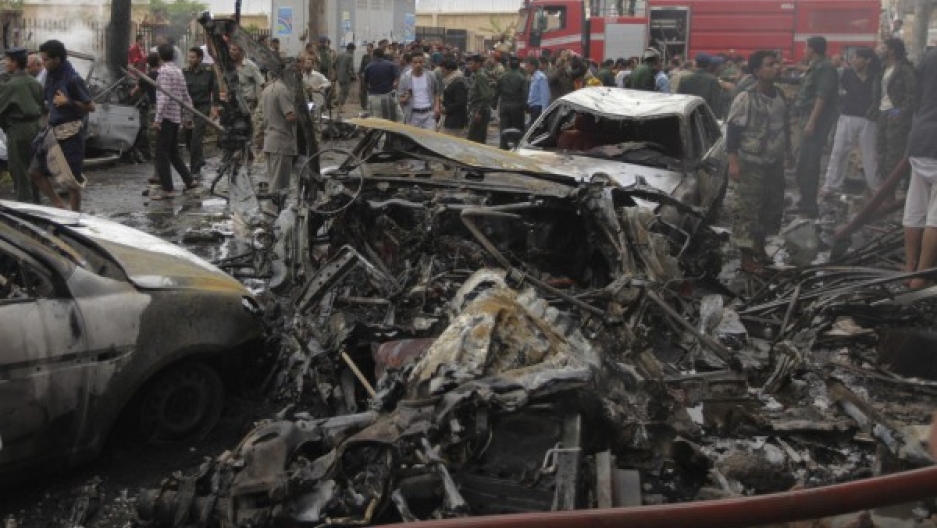 Share
Marco Werman: I'm Marco Werman. This is "The World". Eleven years since al-Qaeda's 911 attacks and more than a year after Osama bin Laden was killed, US officials talk a lot about how the terrorists group is much diminished now. But today, there's a reminder that al-Qaeda still poses a serious threat in some parts of the world. A powerful car bomb struck the motorcade of Yemen's Defense Minister in the capital, Sana'a. The bomb killed several people, but the minister escaped unharmed. There was no immediate claim of responsibility for the blast, but al-Qaeda's Yemeni branch has carried out several failed assassination attempts against the minister before. The bombing comes a day after Yemeni authorities announced the death of the number two leader of al-Qaeda in the Arabian Peninsula. Freelance journalist Iona Craig is in Sana'a. Iona, you were at the bomb scene earlier today. What did you see? Iona Craig: It was a scene of chaos really when I first arrived. There was still smoke billowing against the sky, the fire department were there, but [??] four vehicles would have been destroyed, two shops would have been burned out, and the sidewalk was littered with body parts and even some parts of bodies that had been thrown in the blast and had landed in a nearby tree, and with very chaotic scenes there with a very large crowd that have gathered and a lot of very nervous soldiers. Werman: Is this attack seen as retaliation for the death of al-Qaeda's number two in Yemen? I mean what was the motivation here? Craig: It is quite possible. The Minister of Defense has been targeted by the al-Qaeda militants in the past. Most notably on May 21st, here in Sana'a there was a huge suicide bombing that killed nearly a hundred soldiers at a military parade practice where the Minister of Defense was attending. Again, he managed to walk away from that attack and that was in retaliation to a military offensive that had been carried out by Yemen's military in Southern Yemen to push al-Qaeda's insurgent wing out of southern towns. So it is possible that this attack today is in reaction to this killing which supposedly happened. This still hasn't been confirmed yet, that al-Qaeda's number two has in fact been killed. We normally wait to hear for confirmation from al-Qaeda themselves. Werman: Right. Understood. Now, al-Qaeda took advantage of the political vacuum in Yemen during unrest last year. How big of a threat is al-Qaeda in Yemen? How much of the country do they actually control? Craig: Not so much now. Last year they did. They took over at least five towns in Southern Yemen, they declared an Islamic Emirate and they were literally governing the [??] towns. But after the [??] offensive that began in May, they were then able to, in some cases, negotiate a withdrawal. Werman: Iona, I want to ask you this: Eleven years after 9/11, with the continuing presence of al-Qaeda in Yemen and the US drone strikes, has all of that translated into anti-Americanism for the average Yemeni? Craig: The main reason any anti-Americanism has grown, and it has here clearly in the last year, is a direct result of the drone strikes. These were brought in again in Yemen in May last year after a year-long break and we've really seen a sort of surge in them this year certainly. And this has generally caused a lot of resentment for not only necessarily the areas that have been targeted, but for the population as a whole. And this has definitely kind of made a lot of people very resentful of what the Americans are doing here and this was kind of cemented really about ten days ago when thirteen civilians were killed in what was apparently a drone strike in the town of Rada' about 90 miles from Sana'a, a missile hit a bus and there were women and children who were killed on that bus. And those kind of things really, really do not help the cause or whatever America is trying to do here and really does cause a resentment to them amongst Yemenis. Werman: Iona, we're going to leave it there. Thank you very much for your time. Craig: No problem. Thank you.